Although not always very wide, roads can be huge barriers to wildlife. Not only do roads break up habitats, making animal movement more difficult, but they also allow people into long-inaccessible natural areas. A new study in mongabay.com’s open-access journal Tropical Conservation Science looks at how drivers on Brazil’s MG-010 road act when faced with small animals, such as snakes, on the path.

Most species, even small animals such as amphibians, reptiles, birds and mammals, respond to roads. Some are attracted to the higher temperatures, lighting, and availability of food resources. Others are deterred by the loud noises, difference in surface, or presence of vehicles.

“Vehicle collisions are the leading cause of direct mortality of animal populations,” Secco and his colleagues write in the paper. 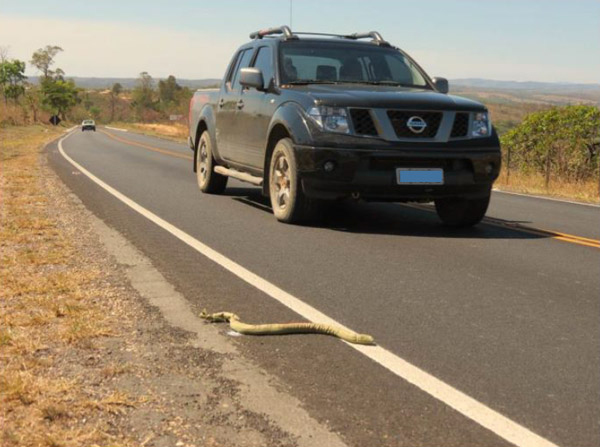 Indeed, among the animals most killed by vehicles are snakes. Intentionally killing snakes on the road is common in many countries, mainly because people fear that these small legless reptiles pose a threat.

Langley et al. determined that both male and female college students in Kansas deliberately hit snakes more often than any other animal during the study period. A similar study, by Ashley et al., conducted in Canada found that both turtles and snakes were struck at higher than coincidental rates. More recently, Beckmann and Shine studied intentional road-kills in northern Australia. They found that the invasive and toxic cane toad (Rhinella marina) was the most intentionally killed animal on the road, followed by snakes.

To see how motorists in Brazil treated snakes, the scientists selected a stretch of the MG-010 road between Sumidouro State Park and Serra do Cipó National Park in Brazil’s Minas Gerais state. While the area boasts remarkable biodiversity, it receives upwards of 130 vehicles per hour.

The scientists created fake snakes using sand-filled cloth painted with realistic looking designs. The fake snakes were then placed in different spots on the road, for example close to the edge or close to the median, to judge if vehicles would travel out of their way to run over the life-like snakes. To see if the drivers actually paid attention to what was on the road, the scientists also placed out two liter plastic bottles in similar spots on the road. Then they set up hidden cameras to monitor passing vehicles.

The team was most interested in assessing if drivers would intentionally run over any of the objects placed in the road. The road-kills were only considered intentional if the vehicle changed its natural trajectory in the lane towards the object. Unintentional road-kills, or merely continuing along the same path, were still considered road-kills but were tallied separately.

Forty-two fake snakes were intentionally run-over compared to 31 plastic bottles. The scientists decided to combine the results from the fake snake and plastic bottle run-overs, since they were so similar, and compare that to the coincidental run-overs to determine if drivers in the study area deliberately run-down objects in the road.

“There was no difference in the number of intentional road-kills between snakes and control objects,” the authors write. “However, we observed that more than half of all road-kills recorded during the study were classified as intentional, making deliberate road-killing a common practice of drivers who travel on Brazilian roads, regardless of the object type.”

Despite cars being the overwhelming majority of vehicles on the road, trucks had a similar amount of intentional road-kills. In fact, cars and motorcycles were responsible for fewer road kills proportionally than trucks and buses, likely because the potential of damage to the smallest vehicles is greatest. In addition to being more resistant to damage, larger vehicles travel at slower speeds, allowing them more time to go towards — or away from — an object in the road.

The scientists recommend further studies to increase the sample size of roads and vehicles. They also suggest there may be possible regional differences across the different states of Brazil.

Small animals, especially those that are drawn towards roads and viewed as threatening, are likely to be the most affected by road-kill.

“Thus, we emphasize the need for mitigation measures that prevent small animals, such as snakes, from entering and moving on roads, because drivers tend to intentionally hit any object that is present in the land,” concluded the authors.

(02/04/2014) Flying snakes achieve surprising amounts of lift through the shape of their bodies, report researchers from Virginia Tech in a paper recently published in the Journal of Experimental Biology. The study examined how paradise tree snakes—one of five species of so-called flying snake found in Southeast Asia—shape their bodies to achieve the lift that allows them to glide up to 30 meters between trees.