Study calls into question the efficacy of agroforests in conserving biodiversity

With an estimated population of 700 million individuals, domestic dogs are the most abundant carnivore in the world and are present everywhere that man has settled. Domestic dogs, commonly referred to as man’s best friend, are not usually viewed as a huge threat to wildlife and native habitats, but according to a recent study published in mongabay.com’s open access journal, Tropical Conservation Science, dogs fit all three categories to be considered an invasive species and may be decimating mammals in agroforests in Brazil.

Scientists define invasive species in three ways: species that break down geographic barriers, cause new ecological interactions as they enter a novel ecosystems, and finally have a negative impact on native species. Because of their association with humans, domestic dogs are able to disperse freely and interact with native species, generally having a negative impact on species by preying on them, competing with them, or even spreading disease.

Confirming this, the researchers found that, at least in the agroforests of Brazil’s Southern Bahia, the impact of domestic dogs better explained the decline in native mammals than any other cause examined. 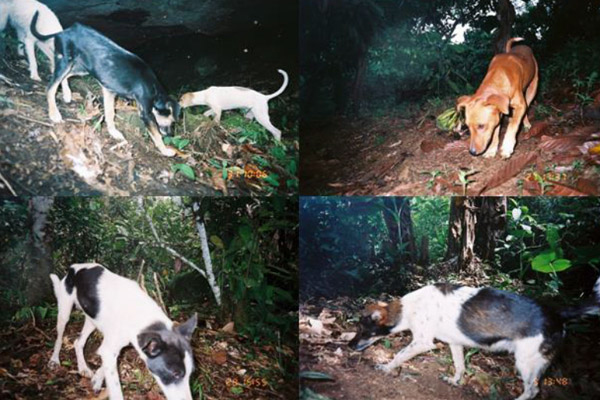 Agroforestry is a land management strategy that is meant to balance farming production and biodiversity conservation. Here, agricultural products, such as cacao and coffee, are cultivated in association with native trees that support native wildlife. While this is a seemingly feasible solution to conserve native species on agricultural lands, research indicates that disturbed habitat, like agroforests, facilitate colonization of invasive species, in theory making these highly managed lands more susceptible to invasive species.

Setting out to determine if agroforests are in fact more susceptible to invasion by domestic dogs than surrounding native forests, the researchers emploed camera traps in both habitats. They discovered that dogs visited agroforests more often than native forests, but in both types of forests, dog visits were highly associated with human activity. Visits were much more frequent during work hours and during the workweek. The higher frequency of domestic dogs in agroforests is likely due to the larger number of people who enter these areas as well as the longer stays by workers.

According to the authors, one of the biggest implications of their findings is that “agroforest management intensification, which is becoming more pronounced on a global scale, increases the risks of invasions, potentially limiting the value of this agricultural system for reconciling food production and biodiversity conservation.”

However, they also say that further research is required to evaluate the effectiveness of agroforestry for conservation and determine the proper management strategy for invasive species.

“Although no management solution to avoid the impact of dogs on wildlife will be simple, awareness and education campaigns to discourage workers to allow their dogs to follow them into agroforests can be a step forward, and could be incorporated in action plans for increasing the conservation value of agroforestry mosaics,” the authors write.

(08/27/2014) You may have recently read the controversial story on invasive lionfish research involving Dr. Zack Jud of Florida International University and a young girl named Lauren Arrington. While the issue of attribution in scientific research is crucial to the discipline, much of the media focus so far has sidestepped the real issue: what lionfish tolerance for brackish water really means for the environment.

(08/22/2014) Damage from Hurricane Iselle, which recently battered Hawaii’s Big Island, was exacerbated by invasion of non-native tree species, say experts who have studied the transformation of Hawaii’s native forests. selle, which made landfall on the Big Island on August 7, was the third-strongest tropical cyclone to hit Hawaii since 1950. It caused upwards of $50 million in damage.