by Shreya Dasgupta on 4 September 2014

The illegal wildlife trade has long been ignored in Peru, but changes are afoot 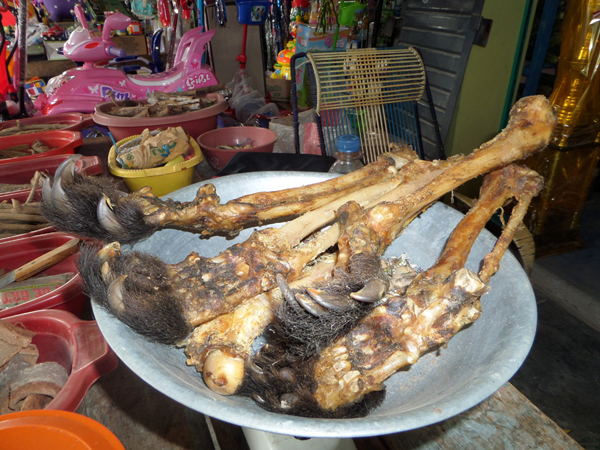 Illegal wildlife trafficking is thriving in Peru. But a Peruvian organization is now using a public campaign, via social media and press releases, to track and rescue illegally kept wildlife in the country.

“I have filed 47 complaints from 14 different states in Peru including hundreds of animals commercialized illegally in markets, kept as pets, and used as tourist attractions,” said Noga Shanee, Co-founder and project director of Neotropical Primate Conservation (NPC), the organization working towards ending Peru’s illegal wildlife trade.

The NPC team is also trying to gather information on wildlife traffic routes and trends in the country. Additionally, their campaign aims to highlight problems in dealing with the illegal wildlife trade in Peru, which in the past has received limited attention from the Peruvian government and other NGOs. The main problems, according to Shanee, are a lack of resources and trained rescue personnel, an extremely slow justice system, and a lack of awareness among the public. 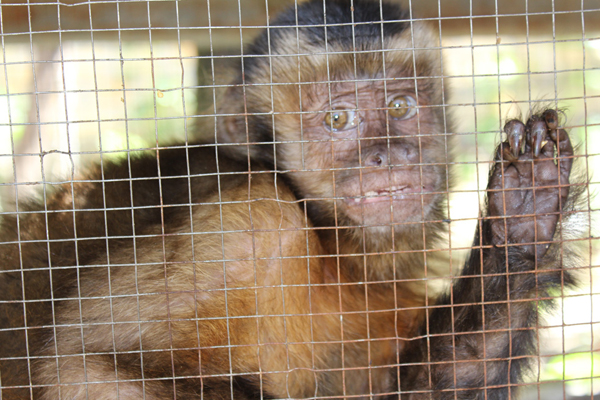 “I noticed that people did not know how or where to file complaints regarding captive wildlife,” said Shanee. “People are also wary of filing these complaints directly because they are afraid of getting into trouble with their friends and neighbors.”

However, social media has made it easier for people to anonymously report illegally kept wildlife. In addition, NPC collects all information confidentially, and files the complaints in the NGO’s name.

For example, earlier this month, Shanee’s team rescued two Peruvian spider monkeys (Ateles chamek) from a circus based on a tip-off on Facebook. The monkeys were in a pitiable state – they had been tied up in the sun without food or water, were severely malnourished, and had lost most of their teeth.

“The owner told the authorities that he had been travelling with these monkeys for the last 11 years, including to big cities. He had even put his circus tent in front of the Wildlife Authority’s office once,” said Shanee. “While he knew it was illegal to keep these animals, no state authority had ever visited him regarding the monkeys.”

Peruvian spider monkeys are severely threatened by hunting for use in pet and bushmeat trade, and are listed as Endangered on the IUCN Red List of Threatened Species.

Similarly, numerous other anonymous tip-offs have helped reveal locations of illegally kept animals in tourist centers, restaurants, markets, roadside merchants and even private homes. For instance, the campaign has resulted in confiscations of over 200 animals from the Bellavista market, one of the biggest open wildlife markets in Peru.

Parrots — including Peru’s national bird, the Andean cock-of-the-rock (Rupicola peruvianus) — other parakeets and macaws are the most commonly traded animals.

“From time to time, the authorities find traffickers traveling with thousands of parakeets from the rainforest to the coastal cities by boat and car, which takes at least a week,” said Shanee. “During this time, the birds are kept in tiny boxes without food or drink, and obviously many of them are found dead on arrival at the coast. We estimate about eight out of ten die before they get to become pets.”

Primates, too, are hot favorites.

For example, a survey conducted by Shanee between 2007 and 2011 showed that primates were the second-most hunted animals in northeastern Peru. And of these hunted primates, 85 percent were captured alive for the pet trade. Low reproductive rates and dwindling populations, makes primate-hunting unsustainable and brings the animals closer to local extinctions, Shanee wrote in a 2012 paper published in Endangered Species Research.

Despite the large trafficking nexus in the country, there has been very little work to identify the wildlife-trafficking network in Peru. But Shanee believes that it is closely connected to other illegal trades like arms, drugs, illegal logging and even human-trafficking.

“The campaign has now got the support and interest of two of the main national coordinators of all wildlife authorities in Peru,” she said. “This means that they are ready to follow up on the complaints, and are willing to listen to the results of the campaign, which will hopefully lead to real changes – like successful prosecutions in wildlife trafficking cases.”

24 animals; parrots, macaws, a tucan and a giant anteater, sized from a private house in Pucallpa. Photo credit by Noga Shanee/NPC. 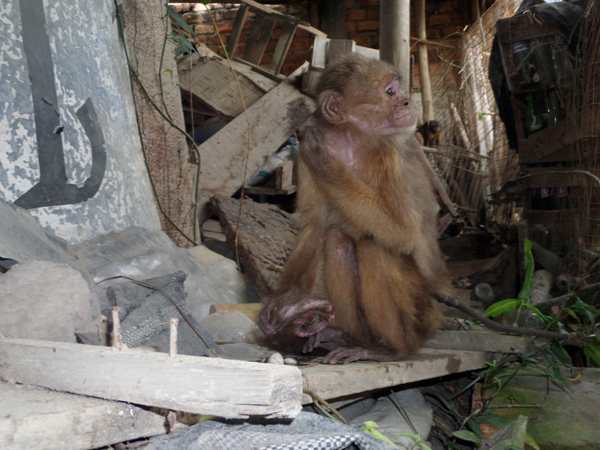 Old skinny capuchin monkey tied to a mountain of rubbish, the wound on the end of his tail is a result of stereotypical behavior of hair pulling because of stress. Was rescued and now lives with a female capuchin he fell in love with. Photo credit by Noga Shanee/NPC 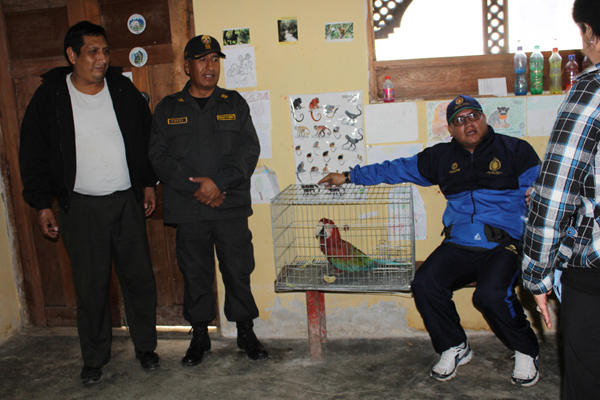 (08/28/2014) Police in Langkat, North Sumatera, Indonesia, seized 55 porcupines from smugglers preparing to ship the animals to China. Three suspects were detained during last week’s operation, while their accomplices remain at large. Dozens more animals reportedly obtained from dealers in Medan are still unaccounted for.