Last year, the people of China emitted more carbon per person than those in the EU, according this year’s Global Carbon Budget. The report, updated annually, also found that global emissions jumped 2.5 percent last year and are set to hit a record high of 40 billion tonnes this year. The findings highlight how little global society has done to stem emissions, despite numerous pledges and past global agreements.

“The time for a quiet evolution in our attitudes towards climate change is now over. Delaying action is not an option—we need to act together, and act quickly, if we are to stand a chance of avoiding climate change not long into the future, but within many of our own lifetimes,” said Pierre Friedlingstein with the University of Exeter who authored a scientific paper to go along with the release.

Last year, on average each person in China emitted 7.2 tons of carbon dioxide, compared to 6.8 tons each person in Europe. This is the first time in history that China—only recently the world’s largest emitter of carbon—has surpassed Europe in per capita emissions. Overall, China’s emissions rose by 4.2 percent last year, while the EU’s fell by 1.8 percent in 2013.

However China’s per capita emissions are still a far cry from U.S. levels, which last year were 16.8 tons per person. The Global Carbon Budget found that U.S. emissions actually jumped 2.9 percent last year. 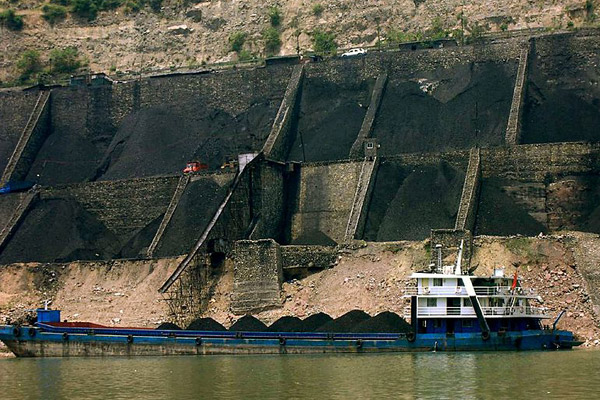 Coal hopper with barge in China. The country is the largest consumer of coal, which is the most carbon-intensive energy source. Photo by: Rob Loftis/Creative Commons 3.0.

China, the U.S., the EU, and India alone account for 58 percent of all the world’s emissions, though India’s per capita emissions are significantly lower than the others at 1.9 tons.

The report was released yesterday, coinciding with the largest marches for climate action the world has ever seen. The biggest march—in New York City—reportedly attracted around 400,000 people. Worldwide, over half a million people joined in marches in 161 countries. The marches, and an ongoing demonstration today on Wall Street, are meant to put political pressure on world leaders as they meet in New York City tomorrow for a UN Summit on climate change.

Governments worldwide have pledged to keep global temperatures from rising more than 2 degrees Celsius above pre-industrial level. But scientists say they are rapidly running out of time to keep their promise.

“We have already used two-thirds of the total amount of carbon we can burn, in order to keep warming below the crucial 2 degree Celsius level. If we carry on at the current rate we will reach our limit in as little as 30 years’ time—and that is without any continued growth in emission levels,” noted Friedlingstein. “The implication of no immediate action is worryingly clear—either we take a collective responsibility to make a difference, and soon, or it will be too late.”