by Morgan Erickson-Davis on 5 September 2014

World lost nearly 10 percent of its untouched forests in just over 10 years, according to new analysis

Every day, the world loses about 50,000 hectares of forest to agricultural clearing, road development, and other human activities, constricting true wilderness into smaller and smaller areas – along with the species that inhabit them. New analysis and maps released this week show these last vestiges are disappearing at a quick pace, with more than 104 million hectares degraded from 2000 to 2013.

Intact Forest Landscapes (IFLs) are areas that are large and pristine enough so that they still contain their entire complements of native species. Ninety-five percent are in the world’s tropical or boreal regions. Many act as oases in seas of human disturbance, providing vital refuges for threatened animals that have nowhere else to go. The 400-some last wild Siberian tigers, for instance, live almost exclusively in an IFL in the Russian Far-East. 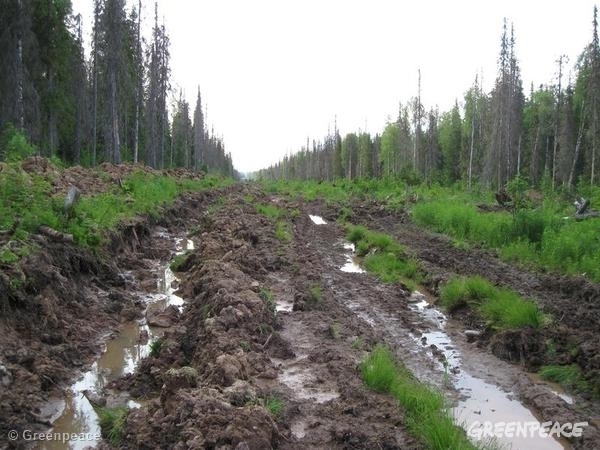 Many IFLs are not protected. Even those that are protected are at risk of degradation. Because no one knew how much land was contained in the world’s IFLs, Greenpeace Russia, World Resources Institute (WRI), and researchers at the University of Maryland (UMD) began investigating them more than a decade ago to facilitate monitoring.

“Our team developed the IFL concept and mapping method in the late 1990s as a simple and practical tool for mapping and monitoring global forest degradation,” said Dr. Peter Potapov, Research Associate Professor at the University of Maryland. “Based on freely available satellite data, the method allowed us to map global intact areas for the first time. The year 2000 IFL map provided a global baseline for subsequent forest degradation monitoring.”

For the analysis released this week, WRI and UMD partnered with the Greenpeace GIS laboratory, Transparent World, and WWF-Russia to examine the extent of IFLs today and compare them to data collected over more than a decade. They found that in a period of 13 years, the world’s IFLs lost 104 million hectares of tree cover, representing 8.1 percent of their total land area. The regions most affected by degradation include the boreal forest of Canada, Russia, and Alaska, where IFLs have been reduced by 47 percent. Certain tropical regions also experienced significant degradation, with the Amazon losing 25 percent of its undisturbed area. 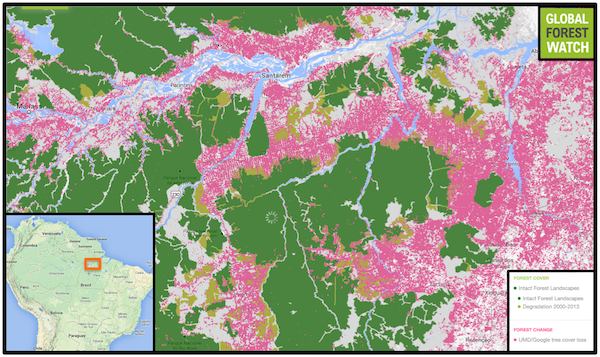 Overall, the 87 million-hectare region along the Amazon pictured lost approximately seven million hectares of forest between 2001 to 2013, according to Global Forest Watch. Light green represents IFLs that were degraded from 2000 to 2013. Click to enlarge.

The analysis identified road building as one of the key drivers of IFL degradation in many areas, with causes varying per region. The researchers hope these new findings facilitate better land-use decisions, such as which areas to avoid when sourcing timber and establishing palm oil plantations.

The maps are accessible via the forest monitoring site Global Forest Watch, which synthesizes data from NASA, Google, and other sources into a platform that allows users to track changes in forest cover in near real-time.

“Thanks to ever more powerful cloud computing, satellite imagery, and the efforts of the Global Forest Watch partners, we can clearly see that business as usual will lead to destruction of most remaining intact forests this century,” said Dr. Nigel Sizer, Global Director of the Forest Program at WRI, and head of Global Forest Watch.

Worldwide, forests are disappearing at a fast clip. According to Global Forest watch, Malaysia lost 4.7 million hectares between 2001 and 2013, representing more than 14 percent of its entire land area. Brazil lost forests amounting to 4.2 percent of its area during the same period, and Indonesia lost 8.5 percent. In addition to restricting the amount of habitat available to wildlife, loss of tree cover has a plethora of side effects, from destabilizing watersheds to exacerbating global warming.

“There is an urgent need for governments to heed the calls of their citizens and to respect the rights of forest-dependent peoples by properly protecting remaining intact forests,” Sizer said.

(09/04/2014) There isn’t a word or phrase in the Kuna language for ‘carbon trading,’ and much less for something as complex as REDD+. Standing for Reducing Emissions from Deforestation and Degradation, REDD+ is the worldwide UN backed climate change mitigation scheme that relies on carbon trading within forest landscapes for funding. And yet, since 2008, the Kuna people have been hearing lots about it and referring to it often in their private conversations.

The last of her kind: centennial of the death of the world’s last passenger pigeon

(09/01/2014) They once numbered in the billions, flying 60 miles per hour in flocks that darkened the sky. But on September 1, 1914, one hundred years ago today, the last member of what may have been the most numerous bird species on the planet died in a cage in the Cincinnati zoo.

(08/28/2014) A criminal organization involved in the illicit deforestation of large portions of Brazil’s forests has been stopped, with at least six members of the organization arrested as of Aug. 28 and warrants issued for others. The gang has been accused of committing crimes worth over $220 million.

(08/27/2014) ‘I make six times the amount of money logging as I would working my small plot of land or even working legally in a pulp and paper or palm oil plantation.’ An illegal logger explains the economic conditions in South Sumatra. Mongabay Special Reporting Fellow Robert S. Eshelman interviews an illegal logger in Indonesia on the topic of cleaning up commodity supply chains.