Indonesia ended 12 years of stalling this week, becoming the last ASEAN nation to ratify an agreement on transboundary haze. As smoke from more than 1,200 fires in Sumatra and Kalimantan pushed air pollution in neighboring Singapore to ‘unhealthy’ levels, the Indonesian House of Representatives ratified the 2002 ASEAN Agreement on Transboundary Haze Pollution (AATHP).

The move comes shortly after Singapore approved a bill allowing them to fine foreign companies responsible for producing haze, even if the activities occur outside of the country. The bill is aimed squarely at companies operating in Indonesia who’s land clearing last year pushed Singapore’s pollution index to a record setting 401. (Anything over 300 is considered ‘hazardous’). Singapore again reached 100 this week—an ‘unhealthy’ level at which officials warn individuals should, “reduce prolonged or strenuous outdoor physical exertion.”

Indonesia’s National Disaster and Mitigation Agency (BNPB), reported that as of Wednesday 599 fires were burning in Central Kalimantan, 252 in South Kalimantan, 193 in West Kalimantan, 195 in South Sumatra, 20 in Riau and 17 in Jambi. According to the World Resources Institute, 66% of these fires started within the boundaries of oil palm, logging, and pulpwood concessions. Sutopo Purwo Nugroho, a spokesman for BNPB, separately confirmed this, telling the Jakarta Globe that the main cause of the fires was land clearing for commercial plantations. Further, he said, the situation is likely to get worse is coming weeks.

“The peak of the dry season is expected to last until October,” Sutopo said, “hence the fires have the potential to spread if we can’t control them.” The agency has requested more money from the Indonesian government, estimating the cost of suppression will reach Rp 355 billion ($30 million) this year. Ratification of the AATHP will allow Indonesia to request assistance from other ASEAN countries to help combat the fires. 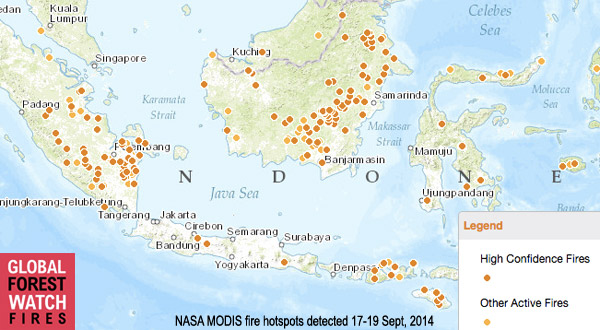 The delay in ratifying the agreement has been criticized as a major embarrassment to Indonesia: the largest haze producer in the region. The AATHP was written in response to massive air pollution in 1997/1998, largely due to fires in Sumatra and Kalimantan where nearly 100,000 square kilometers burned in less than one year causing estimated losses of $9 billion.

Deni Bram, a lecturer in Environmental Law at Tarumanagara University, Jakarta says the delay calls into question Indonesia’s commitment to the solving the problem. “It seems that Indonesia was driven to act by the haze bill passed in Singapore,” he said. “This reflects a half-hearted ratification.”

Greenpeace Indonesia similarly believes that although this is a positive step forward, without aggressive action to combat the root causes of the issue, ratification is simply political lip service.

“Although delayed for 12 years, this ratification is a step forward that deserves appreciation,” said Yuyun Indradi, a campaigner for Greenpeace Indonesia, “However, very few government policies appear to be in support of this step. Such as our government regulations to protect peat lands that actually do very little to protect peat lands. 70% of the fires creating smoke pollution burn in peat. As long as there is only minimal protection of peat lands, this ratification is only political show.”

Indonesia faces a growing problem as rampant forest loss increases the likelihood of fires getting out of control. An analysis of last year’s pollution events recently published by CIFOR concludes that the degraded state of Indonesia’s forests allows them to easily burn, meaning haze events are likely to increase.

“You no longer need extreme drought years for these fires to start,” David Gaveau, lead author stated in a press release, “All you need to have is a few consecutive days of no rain. So that means that these fires can keep recurring more and more often, and it’s going to become more and more difficult to be able to predict them.”

ASEAN, or The Association of Southeast Asian Nations (ASEAN) was formed in 1967 by Indonesia, Malaysia, the Philippines, Singapore, and Thailand to promote political and economic cooperation and regional stability. Membership now also includes Brunei, Cambodia, Laos, Myanmar (Burma) and Vietnam.