Tropical forest restoration projects are exciting research sites for scientists studying factors that affect ecosystem recovery. Here, scientists are trying to understand plant community succession, i.e. the process of recovery after cleared lands are abandoned and allowed to regrow naturally. One of the most important components of this recovery process is seed dispersal, since seeds from nearby forests allow a deforested habitat to become populated again by native plants and trees.

Animals play a huge role in seed dispersal in the tropics, especially birds and fruit bats. Both of these animals create ‘seed rain’ across different habitats as they ingest fruits at one location, and then deposit seeds at another through their feces. In regenerating areas, seed rain is thought to occur mainly by bats when they fly over grassy open areas, and mainly by birds when they are perched under shrubs and trees. Some forest restoration techniques involve clearing out remnant shrubs and trees before planting new tree seedlings in order to reduce competition. But a novel study in mongabay.com’s open-access journal Tropical Conservation Science, challenges this practice, asserting that without remnant shrubs and trees, the birds will not show up. 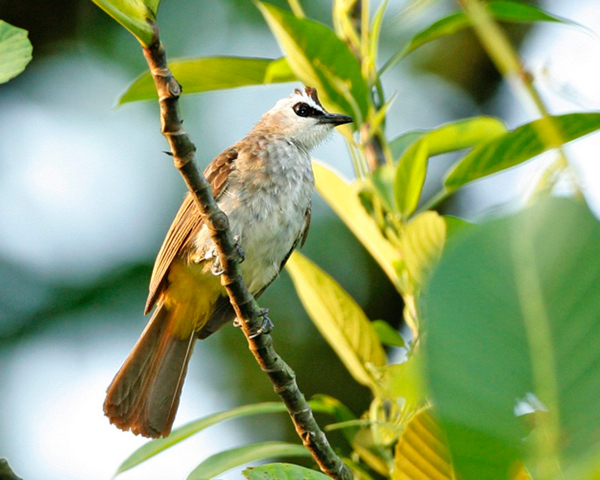 The yellow-vented bulbul (Pycnonotus goiavier) was one of the seed-dispersing birds recorded in the study. Photo by: Lip Key/ Creative Commons 2.0

Led by Tuanjit Sritongchuay with the Prince of Songkla University, the researchers placed 60 seed traps within a 20-hectare clearing in southern Thailand consisting of several different microhabitats ranging from shrub-like vegetation to tree-like vegetation. Later the scientists compared differences in seed abundance and species richness. They also counted the number of birds and bats observed on the days when seeds were collected, and made a note of which plants the birds were perching on.

They found that different microhabitats contained very different seed rain abundance and seed species richness, with the highest amount of seed rain found under the shrubs and the highest species richness found under the trees. Two families of birds, bulbuls and flowerpeckers, were the main seed dispersers at trees and shrubs, while bats were the main seed dispersers over the grassland patches.

Bulbuls, which were the most abundant type of bird observed in the study, are efficient seed dispersers because they deposit the largest number of seeds furthest away from the parent plant.

“At least some bulbul species in our study area spend significant amounts time in intact forest as well as in open, non-forest habitat, making them potentially ideal for dispersing seeds of forest trees into deforested habitats,” the researchers write.

This behavior in bulbuls is thought to be a result of the bird’s preference for tall perches while they search for food.

In contast, flowerpeckers were observed mainly at shrubs.

“This may be due to the small size of flowerpeckers (4-8 grams), which allows them to access and utilize frail shrub branches that cannot support the weight of larger, less maneuverable birds such as bulbuls,” the study states.

The researches also noted that few forest birds from other families were observed, indicating that bulbuls and flowerpeckers play a crucial role in seed dispersal in regenerating ecosystems in this particular region.

“This spatial pattern of seed rain matches other studies indicating that isolated shrubs and trees play a major role in facilitating bird movements across open habitats,” the study states, adding that “maintaining fruiting trees and shrubs in forest restoration areas may provide ‘stepping stones’ for birds within fragmented forest ecosystems and can potentially attract greater numbers of dispersers, particularly bulbuls.”

Interestingly, the scientists hypothesized that the dominance of seed-dispersing bats in grassy habitats was the result of different defecation behaviors. Bats typically defecate during flight, while birds defecate while perched.

“Because bats were the primary dispersers for grassland patches in our study area and elsewhere, protecting fruit bat populations may be crucial for securing the future of plant communities in tropical forest regions, particularly where treeless grassland patches are in need of reforestation,” the researchers advise..

Such findings could help improve reforestation efforts in Southeast Asia, where deforestation rates are the highest in the world.

Leaders pledge to end deforestation by 2030

(09/24/2014) Dozens of companies, non-profit organizations, and governments pledged to work together to halve forest loss by 2020 and end it altogether by 2030. If implemented, the commitment could reduce annual carbon dioxide emissions by 4.5-8.8 billion tons annually, equivalent to removing a billion cars from the world’s roads.