What lies within, we may never know: deforestation threatening Sulawesi’s unique wildlife

For 10 million years the Indonesian island of Sulawesi has been disconnected from other landforms, almost inviting evolution to color outside the lines. Despite a growing population and limited space — more than 17 million people reside on the island as of 2010 — Sulawesi has managed to provide a safe haven to hundreds of unique species as they evolved over millennia.

But that haven may soon be lost to uncontrolled extraction of forest products from Sulawesi’s many pristine ecosystems. According to data from Global Forest Watch, Sulawesi lost more than 950,000 hectares of forest between 2001 and 2013, representing about 5 percent of its area — which may spell danger, particularly for species endemic to the island that exist nowhere else in the world. 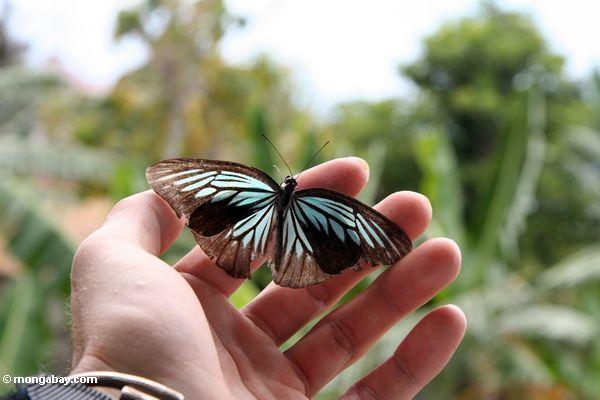 More than 550 species of butterflies have been catalogued on Sulawesi, of which more than 300 are endemic. Photo by Rhett A. Butler.

Sulawesi’s 17.4 million hectares comprise 14 different kinds of ecosystems including mangroves, rainforests, lowland forests, caves, montane forests, marine parks. There are even expanses of hot sand near volcanoes that are used for nesting sites by the Maleo (Macrocephalon maleo) – a bird species that exists solely on Sulawesi and which is listed by the IUCN as Endangered due in part to habitat loss.

Currently, Indonesia harbors more threatened species than any other nation in the world. Over 60 percent of mammals and more than one-third of Sulawesi’s birds are endemic. But Indonesia’s other world record only adds to those woes. Its rate of deforestation is the highest in the world, even outdoing Brazil.

Satellite data from Global Forest Watch shows that logging, mining, oil palm plantations and conversion of land for agriculture are driving deforestation in Sulawesi. Over 80 percent of the island’s forests are degraded to some extent, particularly in the lowland areas and in its mangrove areas. Experts say less than 5 percent of Sulawesi’s mangroves and lowland forests remain undisturbed, while 99 percent of its wetlands are either damaged or destroyed. 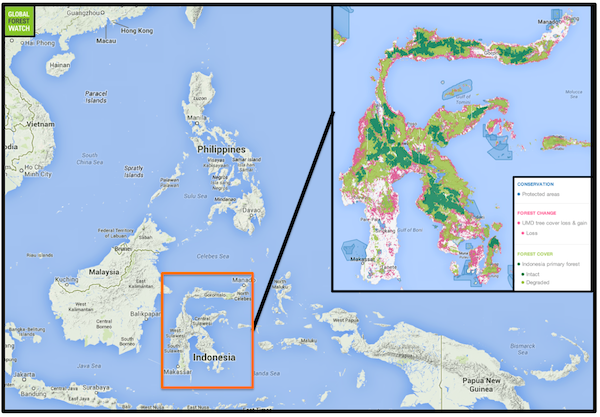 Sulawesi lost nearly a million hectares of forest between 2001 and 2013, and large tracts of its remaining primary forest were unprotected as of 2000. Click to enlarge. 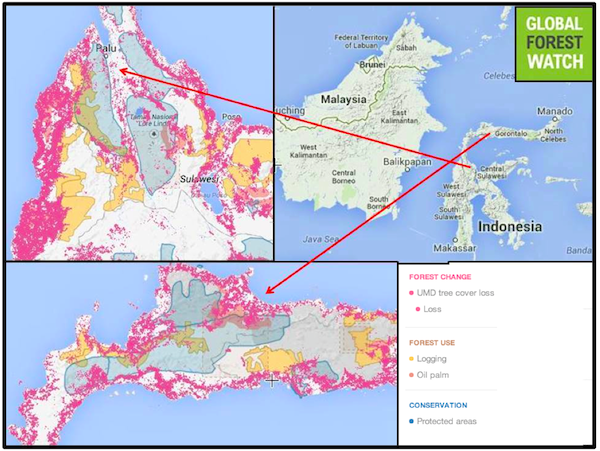 Much of Sulawesi’s forest loss is due to logging and plantation development. Click to enlarge.

With an upcoming election and a possible change in government, it remains to be seen whether Indonesia will uphold its current moratorium on deforestation aimed at curbing emissions. This is especially of concern now as Indonesia recently announced its plans to continue using “degraded” forests for industrial purposes like oil palm plantations.

Because most of Sulawesi’s pristine lowland forests had been lost nearly two decades ago, its rate of deforestation doesn’t seem too high compared to the rest of Indonesia. In reality however, should the present rate of forest loss continue, it would be nothing short of catastrophic for the island’s remaining wildlife.

In June 2014, a team of scientists discovered a new carnivorous water rat which is literally one of a kind because it represents an entirely new genus. Dr. Kevin Rowe, Senior Curator of Mammals at Museum Victoria, was on the team that made this new discovery.

“My first trip to Sulawesi in 2010, we headed to a site on the southeast peninsula where, in 2007, my herpetology colleague had observed healthy lowland forest, home to the Sulawesi Dwarf Hornbill,” Rowe told mongabay.com.

“When we arrived just three years later, the forest was gone. All that was left was a river of silt draining into the coastal mangroves and a small city of tin roofs not yet rusted. The wildlife was gone and what livelihood was left for the local people could only be imagined. My colleague who had witnessed the healthy forest, wept.”

Lowland rainforests, Rowe says, are the worst hit by deforestation.

Critical strongholds of wildlife like the Bogani Nani Wartabone National Park in northern Sulawesi and the Lore Lindu National Park in central Sulawesi are being threatened by logging, illegal mining for gold and nickel, and development of oil palm plantations on the periphery.

Deforestation has undoubtedly affected the already limited habitat of some of Sulawesi’s iconic endemic mammals like the Babirusa (Babyrousa babyrussa) or pig-deer, the endangered lowland Anoa (Bubalus depressicornis), the spectral tarsier (Tarsius tarsier) and the critically endangered crested black macaque (Macaca nigra), a species recently in the news for clicking some stunning “selfies” that are now at the center of a copyright argument.

There are many other species that may be affected by deforestation, but the true extent of its impact is shrouded by lack of research.

“On Sulawesi we may not know what it means for wildlife, in part, because our knowledge of the diversity, distribution, and abundance of wildlife on Sulawesi is so limited,” Rowe said.

But while some of the world’s rarest species are struggling to survive, new species like the carnivorous water rat are still being discovered. Although this is a good sign, it is a race against time.

“Our understanding of the species diversity, even in mammals, is woefully underestimated for Sulawesi,” Rowe said. “Many species are known from a single specimen or a single locality, and therefore, we cannot effectively assess geographic distributions, population size and threats.”

“Many species remain to be discovered and described. We need to improve our understanding of biodiversity so that resource extraction – an essential part of the livelihood of the Sulawesi people – can occur more judiciously with recognition of where the most critical habitat remains,” he said.

“The greatest threat,” Rowe said, “is that we continue to extract; essentially blind to the impacts on Sulawesi’s remarkable and unique wildlife.”
However, not all human communities on Sulawesi are wantonly clearing the island’s forests.

“For generations, the Mamasan people have restricted clearing (land) for plantations and rice fields to areas below 1500 meters,” Rowe said. In particular, preservation of forests on the high plateau of Mount Gandangdewata by the Mamasans has been the most important local conservation initiative Rowe has witnessed, as they are some of the most intact forests on Sulawesi where two new genera were discovered.

These forests currently have no government protection, and Rowe recommends that any efforts to protect them formally should involve and recognize the Mamasan people for their deep knowledge of and cultural connection to them.

“They are the ideal caretakers for this land that they have nurtured and valued for generations.”

Rowe also points to evidence demonstrating the importance of reserves, especially those that include local people in forest protection.
“The National Parks of Sulawesi contain some of the most pristine forest and greatest diversity,” he said. “We should not undervalue their protective role.”