The only way to save the long-suffering elephants of Africa is to close every ivory market on the planet and destroy all ivory stockpiles, according to a bold new essay in Conservation Biology. Written by Elizabeth Bennett, the Vice President for Species Conservation at the Wildlife Conservation Society (WCS), the paper is likely to prove controversial. However it’s clear that if poaching trends continue Africa’s elephants may disappear from much of their range and the forest elephant—dubbed a distinct species by recent research—could even face extinction.

Elephants are being slaughtered at a rate not seen since the height of the previous poaching crisis in the 1980s: experts estimate that somewhere between 20,000 and 35,000 elephants have been killed every year since poaching began skyrocketing in 2007. The mass-killing has decimated numerous populations as poachers employ high-tech weapons and sophisticated gear, in some cases wiping out whole herds, juveniles and infants included.

Yet, debate continues as to how best to deal with the worsening crisis: continue to open up a tightly-managed legal trade or outlaw ivory altogether? 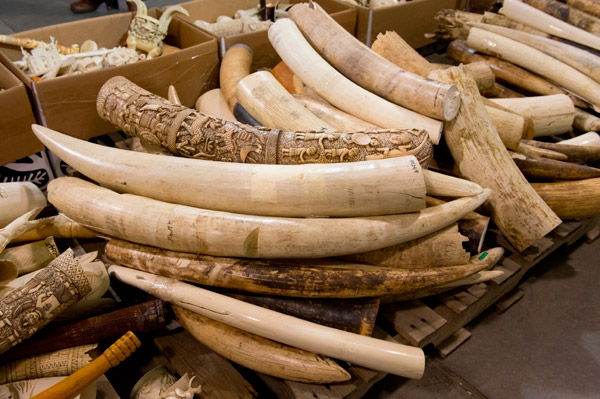 Ivory carvings that were destroyed during the U.S. ivory crush earlier this year. Photo by: Julie Larsen Maher/WCS.

“Many countries, including the United States, China, and Japan, still have legal domestic ivory markets; most ivory is sold
under some form of certification as coming from legal stockpiles or as antiques,” Bennett writes.

Since elephants are listed under Appendix I of the CITES, international trade in ivory is currently outlawed; but domestic trade is another issue. Depending on the country, so-called “legal” ivory could stem from mammoths, elephants killed before a certain year (i.e. antiques), or even recent releases of ivory from government-held stockpiles. In fact some have blamed such government releases—including four in 2008—for sparking the current crisis. But in many places its difficult for officials to tell the difference between legal ivory and illegal yet.

Still, a few experts have even pushed for opening up a larger legal market in ivory in hopes to better compete with illegal demand and drive down the price. In fact, China has argued for just such an approach.

“Rationales for this approach are that legalization could allow more effective regulation and control of the trade; sales could contribute to conservation by satisfying demand, thereby taking pressure off wild populations of the species; and funds generated could be used to support conservation of the species,” writes Bennett. 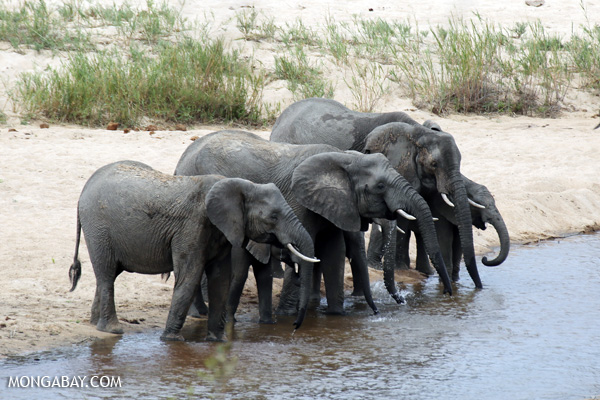 Elephants in South Africa. Photo by: Rhett A. Butler.

While Bennett admits that a well-managed, quota-based, transparent trade in legal ivory is theoretically possible, it’s currently unworkable due to one major sticking point: corruption.

Run by organized criminal gangs, the ivory trade takes advantage of corruption at every level, including bribing of border officials, wildlife rangers, and even judges. Worsening matters is the fact that many of the nations with significant elephant populations—and huge poaching problems—are also high on the corruption scale, according to Transparency International.

“Effective management is particularly susceptible to subversion by corrupt officials because most wildlife officials are very poorly paid. This encourages bribes, especially when dealing with wildlife products of high value,” Bennett writes. In some countries, wildlife rangers wait long periods for promised pay. They are also often outgunned, outmanned, and demoralized by poachers.

According to Bennett, the problems of widespread corruption and poor governance leaves elephant conservationists with only one real solution in the near-term.

“If we are to conserve remaining wild populations of elephants, we must close all markets because, under current levels of corruption, they cannot be controlled in a way that does not provide opportunities for illegal ivory being laundered into legal markets.”

In addition, governments with ivory stockpiles must destroy them, according to Bennett. Already Kenya, the Philippines, the U.S., Hong Kong, and France have all destroyed their stockpiles. Even China has destroyed a portion of its stockpile.

Bennett says such drastic measures are needed to save elephants now, but in the long-term the most important task is to slash global demand for ivory.

“The only sustainable solution is for the demand for ivory—the ultimate driver of the system—to be reduced. Until that happens, if elephants are to survive, we need to close existing legal markets,” she writes.

Elephants are currently listed as Vulnerable by the IUCN Red List. However, that listing was made in 2008, just when the poaching crisis began to escalate. Moreover, the IUCN currently lumps savannah elephants (Loxodonta africana) and forest elephants (Loxodonta cyclotis) together. While savannah elephants have taken a massive beating from poachers, forest elephants are on their knees. Between 2002 and 2011, their population is estimated to have dropped a staggering 62 percent. There are still some strongholds of savannah elephants in well-protected parks, yet conservationists fear these will soon be targeted as populations are wiped out in poorer, less stable parks.

(06/18/2014) Musician Billy Joel has weighed in on the ivory bill making its way through the New York State legislature.