A team of scientists from the United States and Germany has recently described seven new species of Malagasy giant pill-millipede. All but one of these species are considered “microendemics,” in that they have only been found in small, isolated forest patches. The study was published in ZooKeys earlier this year.

The species are all of the genus Sphaeromimus – which means “small ball animal” – and are unique because they contain larger “stridulatory” organs than any other millipedes. These allow the millipedes to make a chirping noise by rubbing body parts together. Although little is known about the purpose of stridulation in millipedes, it was previously hypothesized by the lead author of this study, Thomas Wesener of the Research Museum Alexander Koenig in Germany, that the millipedes are performing mating calls while chirping. 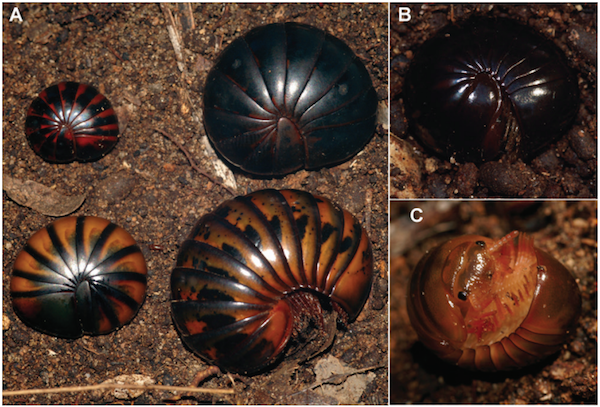 The first species in the genus was originally described during the late 19th century, but was believed by taxonomists to be “possibly mislabeled” or even a nonnative specimen because it did not resemble any of the other Malagasy millipedes. It was not until 100 years later that two more species within the genus were described in Madagascar.

According to Wesener, this interval was due to a century-long research gap.

“No one worked on the millipedes from Madagascar exhaustively since 1902,” he said.

Almost no one, that is. Wesener has been describing millipedes in Madagascar for nearly a decade. He decided to focus on Madagascar because the isolation of the large island provides a unique place to study endemism and biogeography – and millipedes are a perfect way to model both of these topics.

“They are unable to fly, too heavy to drift, and are adapted to the humid soil, so they cannot walk on the surface very well,” he said.

Although Sphaeromimus millipedes are only found in an area less than a few hundred kilometers wide at the southern tip of Madagascar, they vary greatly in terms of habitat type and genetics.

“The Sphaeromimus millipedes [S. splendidus and S. saintelucei] we collected in the littoral rainforest of Sainte Luce were two different species, that are genetically not even closely related, living in fragment S9, a conservation zone, and S8,” Wesener said. “Both [conservation zones] are only a few hundred meters apart, but seem to have a different soil.”

However, titanium mining threatens the little habitat available to the millipedes.

“If you cut down a large amount of forested land in a low biodiversity region, no species go extinct. [However], if you cut down an already damaged strip of forest in Madagascar, so thin you can already see through it, you might loose endemic species permanently,” Wesener said. “Unfortunately the titanium deposits [that are sought after] are directly below the last remaining pieces of littoral rainforest ecosystem in Madagascar.” 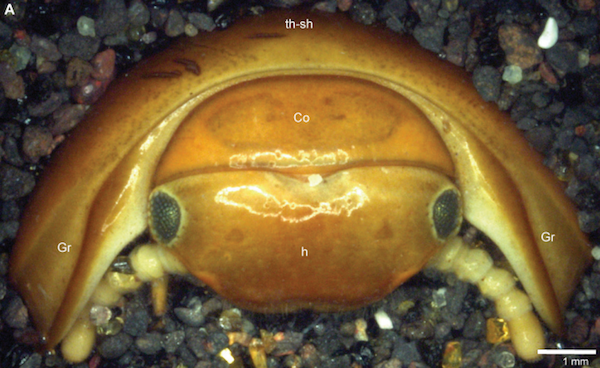 The head of a female Sphaeromimus vatovavy, one of the new species described. Photo courtesy of Wesener et al., 2014.

The littoral forests, with some fragments so small that no large vertebrates can be supported there, still host a variety of smaller endemic species. Not only would mining harm several millipede species, but endemic palms, scorpions, and potentially more undiscovered species would also be put in danger.

According to Wesener, conservation attention tends to be focused on large species and large forests, often leaving small but important fragments and less “charismatic” species out in the cold.

“Much of conservation science is based on large vertebrate species, so the trend is to conserve one large block of forest instead of several smaller fragments,” Wesener said.

Fortunately for Madagascar, portions of the littoral forests have been designated as conservation zones, which will not be mined. These zones will ideally act as reservoirs for the most threatened species while mining occurs. After the mining is completed, native vegetation will be replanted in the previously forested areas.

As for the future of Madagascar millipede research, Wesener and his team plan on looking more in depth at the genetic diversity of different populations, and how forest conservation advances can be used to encompass overlooked species.

“We [plan to] gather genetic data for six different groups of millipedes for all remaining southeastern Madagascar humid forests, to see if we can observe any biodiversity patterns, like forests that are or were a refuge, harboring an especially large amount of endemic species, or genetically distinct lineages,” Wesener said.

“We are also planning a publication on the so-called ‘Centers of Endemism’ on Madagascar, which are important for conservation planning, and seem to be more small-scale in Madagascar than previously thought by the conservation research community, which are heavily biased towards more mobile vertebrates such as birds or lemurs.” 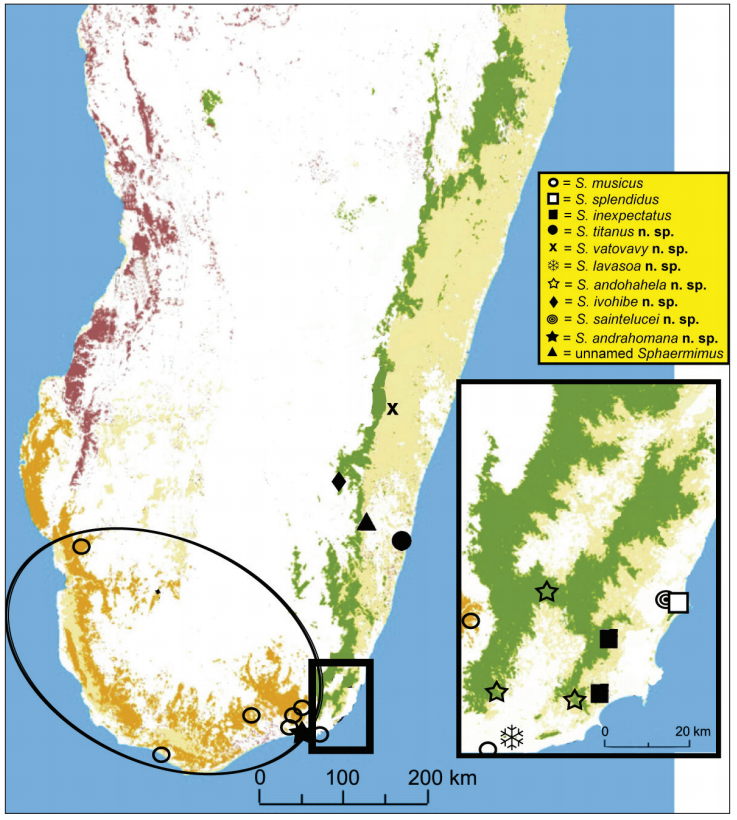