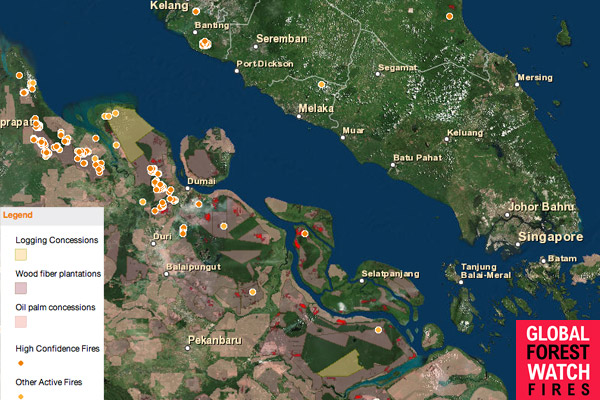 Fire hotspot data for the past seven days from the World Resources Institute’s Global Fire Watch.

Singapore’s parliament has approved a controversial measure that could penalize companies — both foreign and domestic — that are responsible for causing haze overseas, reports Reuters.

The bill, which needs to be signed by Singapore’s president before it becomes law, proposes fines up of to S$100,000 ($80,000) for each day they contribute to air pollution through burning on their plantations and forestry operations. Fines are capped at S$2 million per firm, but companies can face civil claims for damages.

“Parliament has approved the Transboundary Haze Pollution Bill,” wrote Minister of Environment and Water Resources Vivian Balakrishnan in a Facebook post. This will create criminal and civil liabilities for errant companies that cause haze by burning forests and peatlands. We have to make companies accountable for the harm they inflict on our health and environment.” 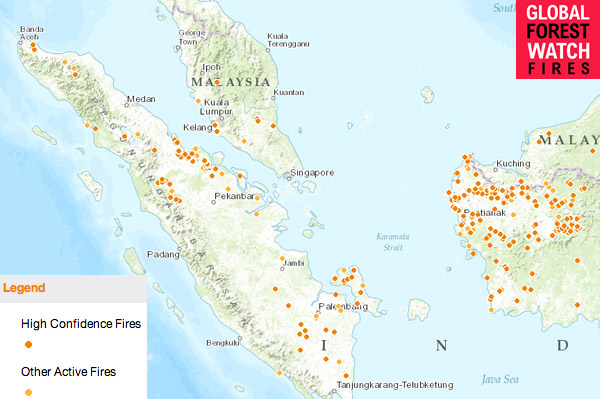 According to NASA data from the World Resources Institute’s Global Fire Watch web site, there are presently dozens of fires burning in Riau, just across the Strait of Malacca from Singapore.

Singapore has been plagued by air pollution caused by peat and forest fires in Sumatra. Many of the fires have been linked to oil palm, timber, and woodpulp concessions controlled by companies with operations in Singapore.

But experts say the law will be difficult to enforce since it also applies to companies outside Singapore. Furthermore, concession data in Indonesia is often spotty, making it difficult to accurately attribute direct blame for haze-causing fires.

Singapore has moved quickly with the legislation due to fears that this year’s burning season could be particularly severe as a result of dry conditions in the region.