Aerial view of cement quarry and limestone hill home to a number of species found nowhere else including a new snail. Photo by: Ong Poh Teck/Basteria.

Scientists have discovered a new snail species on a limestone hill near a cement quarry in Malaysia, which as far as they know lives nowhere else in the world. The animal’s shell is only one tenth of an inch in size.

Although just unearthed, the miniscule snail is already threatened with extinction. It lives on a limestone hill called Kanthan given as a concession to an international company Lafarge. The cement producer quarries the hill for raw materials. As a result, the snail will be included as Critically Endangered in the next update of the IUCN Red List for Endangered Species.

The scientists who discovered the animal named it Charopa lafargei, after the cement company that will decide its fate.

“I’m not aware of a species threatened with extinction which has been given the name of the company which can determine whether it goes extinct or survives,” said Tony Whitten from Fauna & Flora International.

The new snail is not the only endemic species found on the hill. Kanthan is also home to nine plant species that are on Malaysia’s Red List of Endangered Plants, one Critically Endangered spider (Liphistius kanthan), one gecko (Cyrtodactylus guakanthanensis) and two snails (Opisthostoma trapezium and Sinoennea chrysalis) that are found nowhere else in the world. 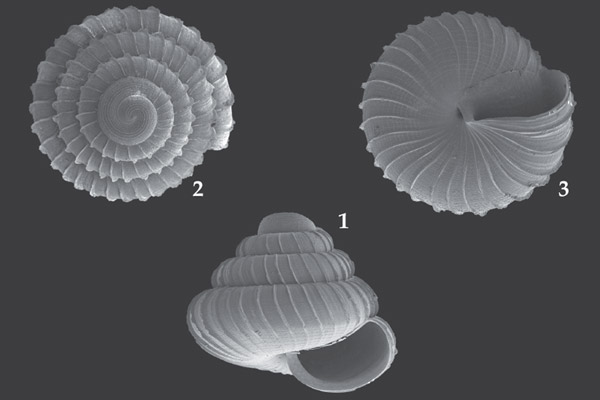 Various views of the shell of the new snail species named after Lafarge. Photo courtesy of Vermeulen et al.

Representatives from Lafarge have attended a number of talks with local environmentalists and discussed potential conservation efforts on the south side of the hill—the confirmed home of the Critically Endangered spider and gecko.

“We are committed to ensuring the preservation of rare biodiversity that may be found on land identified for quarry development,” said Jim Ruxton, Senior Vice-President, Industrial Operations, Lafarge Malaysia.

The new snail, however, was discovered on the north side of the hill—an area which is not planned to receive any special protection.

The company offered no comment on the name selection for the new species.

Environmentalists suggest that what is ultimately needed for good limestone hills management in Malaysia is a region-wide environmental assessment which looks at the biodiversity, physical environment, social and economic costs and benefits of quarrying these hills. The industry could come up with a ranking for the hills as potential quarry sites. Some will be low-hanging fruits because they are already heavily explored and don’t have much wildlife worth protecting. Others, though, will actually have dozens of endemic species and would better be left alone.

“That would be a strategic and logical way to do it,” said Whitten.

Likely part of the issue, however, is that Lafarge has already invested a lot in Kanthan hill. The company has paid a concession to the local government and has built a cement processing plant immediately next to it. The fate of ‘their’ newly discovered snail remains uncertain.

Forgotten species: the exotic squirrel with a super tail

(08/13/2014) With among the world’s largest tails compared to body-size, the tufted ground squirrel just might be the most exotic squirrel species on the planet. Found only on the island of Borneo, this threatened species is also surrounded by wild tales, including the tenacity to take down a deer for dinner. New research explores the squirrel’s monster tail and whether other tales about it may be true.

(08/05/2014) Scientists have identified a new species of frog on the Malay Peninsula. The newly named Hylorana centropeninsularis was discovered in a peat swamp and genetic analyses revealed that it is evolutionarily distinct from its stream-dwelling cousins.

(07/24/2014) Lush Cosmetics has agreed to support an effort to battle trafficking of the Sunda pangolin.

(07/20/2014) Long considered an unproductive hindrance to growth and development, peat swamp forests in Southeast Asia have been systematically cleared, drained and burned away to make room plantations and construction. Now, as alternating cycles of fires and flood create larger development problems, while greenhouse gas emissions skyrocket, it is time to take a closer look at peat, and understand why clearing it is a very bad idea.

(07/03/2014) Scientists at Stanford University recently unveiled a new modeling program that can predict the response of the environment to the land-use changes of human communities. Using their model, they found that natural resources can support humanity – up to a certain point.