Seagrass meadows form important parts of many ocean ecosystems, but is disappearing due to human impacts. However, a study published recently in PLOS ONE found eelgrass beds could benefit from a restoration technique using seed-filled pearl nets.

The technique, called Buoy-Deployed Seeding (BuDS), uses pearl nets filled with seed-containing “spathes,” which are much like peas in pea pods. The spathe-filled pearl nets are attached to a buoy anchored to the substrate so that the net sways with the tides. The seeds in the spathes develop naturally and drop to the floor as they ripen. This is closer to what happens in nature compared to other artificial seeding methods that broadcast mature seeds at once, according to Dr. Brian Ort, lead author of this study that was conducted at the Romberg Tiburon Center of San Francisco State University. 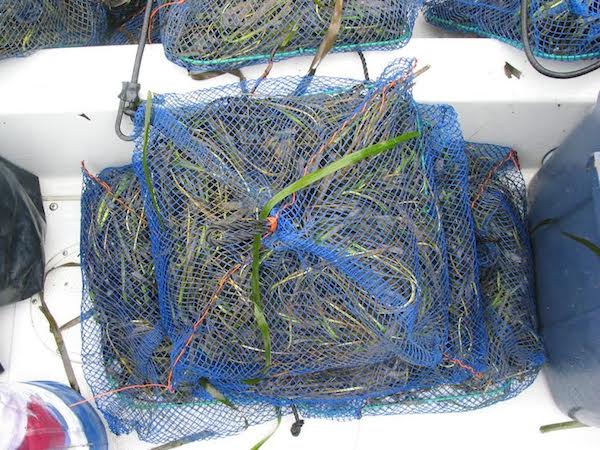 Seagrass spathes (the part of the plant that contains its seeds) surrounded by netting that allow the seeds to fall to the seabed below. Photo by Jude Stalker.

Eelgrass is a genus (Zostera) of a marine plant that has long, grass-like leaves, which grows in coastal waters and brackish ares around the world. It provides the foundation for entire ecosystems, just as corals do for a coral reef ecosystem, according to Ort.

“Eelgrass provides physical structure and shelter for many other organisms,” he explained. “Fish, including commercially important species, use it to hide from predators or prey. Some, like herring, use it as a nursery in which they lay their eggs, giving their young a safer place to grow before migrating to sea.”

“Being rooted in the sediment, they stabilize substrates and shorelines, improving water quality and guarding against erosion, like terrestrial grasses do,” Ort said. “In addition, their shoots absorb wave energy, also protecting shorelines. This also improves water clarity by trapping fine sediments in the water column, allowing them to settle to the bottom.”

Eelgrass, however, is disappearing from sea floors due to human influences.

“Eelgrass is impacted by the filling of shallow waters, dredging,…boat anchoring and mooring chains, wave energy from boats, trawling, poor water clarity as a result of sediment, and nutrient run-off,” Ort said. “The elimination of shallow areas, for example by dredging a channel and then protecting the steepened shoreline by the use of rip-rap, also eliminates eelgrass habitat. Climate change, and the rising sea levels that come with it, is also reducing the amount of suitable habitat available for eelgrass.” 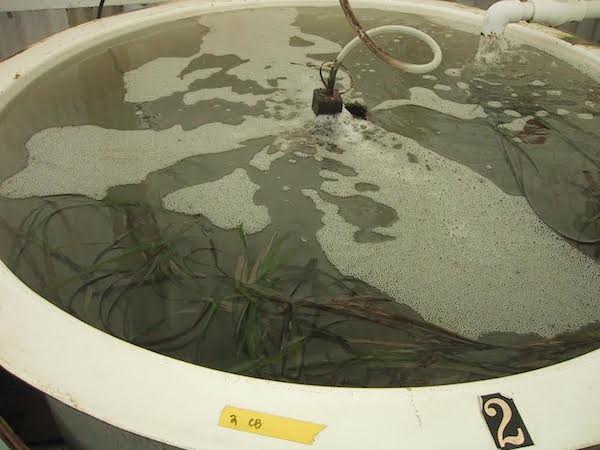 The study found that BuDS is especially effective for preserving genetic diversity. The method was tested in tanks filled with water from San Francisco Bay and with seed-filled nets floating in each. The seeds fell from the nets and started to grow as they matured, and the researchers compared the genetic diversity of the seedlings in the bins to that of the natural environment where the seeds were collected. They found the resulting crop of eelgrass was just as genetically diverse as the beds where they came from.

Genetically diverse ecosystems, in relation to homogeneous ones, are better able to survive through stressful situations since a wide variety of genes allow for more flexible adaptive responses. Likewise, genetically diverse patches of seagrass tend to be better at withstanding heat and grazing by geese, increasing the likelihood that restoration will succeed.

Several years ago, BuDS was used for a project to restore a meadow that had suddenly died a few years earlier. Currently, this method is used as part of the Living Shorelines Project in the San Francisco Bay area, which aims to protect shorelines with sustainable resources and natural vegetation in lieu of conventional shoreline reinforcement methods that degrade wildlife habitat. 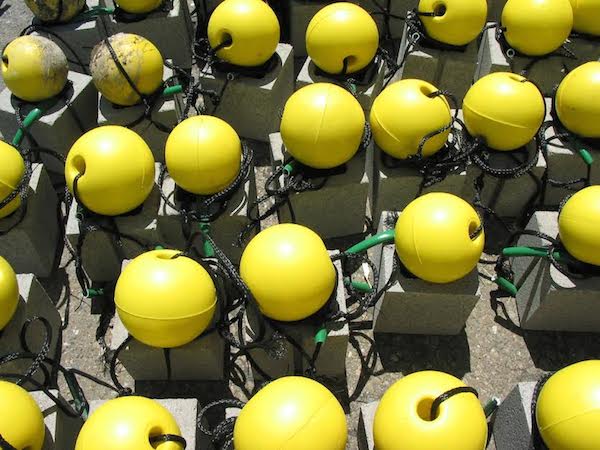 Buoys are used to suspend the spathe nets high in the water so that their seeds disperse widely. Photo by Jude Stalker.