China and Europe’s outsourcing of soy production impacts the Amazon Soy consumption in China and Europe is having significant ecological impacts in the Brazilian state of Mato Grosso, finds a study published in Environmental Research Letters.

The research, led by Michael Lathuillière from the University of British Columbia, used five footprint indicators — forests, land, carbon, water, and nutrients — to evaluate the environmental implications of Mato Grosso’s soy production and exports during the 2000s. They found that the soy sector was associated with 65 percent of the state’s deforestation and up to 17 percent of Brazil’s total carbon emissions from land use change.

But beyond the headline numbers, Lathuillière and colleagues identified an important shift in how soy was produced in Mato Grosso following the 2006 “moratorium” on new deforestation for soybean production. Annual deforestation plunged 70 percent in the aftermath of the moratorium, but the intensity of other resource use increased nearly 30 percent as growers moved to boost production without clearing additional forest.

At the same time, there was a dramatic shift in exports, with Europe’s share declining from 64 percent to 20 percent and China’s increasing from 16 percent to 66 percent.

The researchers used that data to then calculate the resource flows embodied in exports to Europe and China. For example, virtual water flows in 2010 were 10.3 cubic meters per year to China and 4.1 cubic meters to Europe. 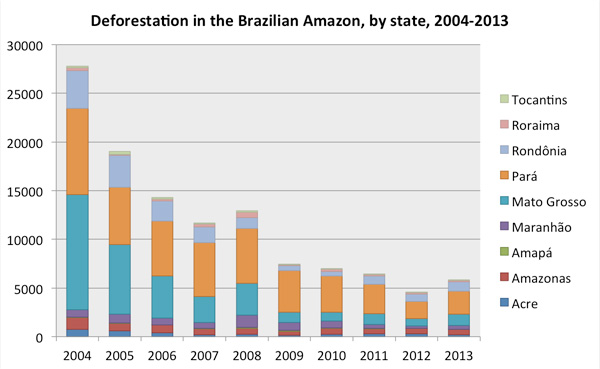 Deforestation by state in the Brazilian Amazon. Data from INPE.

“The decline in deforestation suggested a shift in soybean production system from one based on extensification (agricultural expansion into natural ecosystems) to one based on intensification (increase in yield on available land) with differences in resource use and allocation to trade partners with China replacing Europe as the main soybean importer,” the authors write. “Over the study decade, soybean production required ever larger amounts of water and fertilizer inputs related to increases in planted areas and average yields, both of which are key to ensuring adequate total crop production.”

The findings have implications for determining the impact of shifting agricultural practices in the Amazon. While emissions associated with deforestation may be declining, other environmental impacts may be rising.

“Our estimated environmental footprints suggest potential regional impacts on climate, biodiversity, ecosystem services, and a possible incremental soil phosphorous saturation that could increase the risk of eutrophication in the long term.”