Biomass burning accounts for 18% of CO2 emissions, kills a quarter of a million people annually

Biomass burning takes many forms: wildfires, slash-and-burn agriculture, clearing forests and other vegetation, and even industrialized burning for energy production. Yet this burning—mostly manmade but also natural—takes a massive toll both on human health and the environment, according to a new paper in Journal of Geophysical Research: Atmospheres.

“We calculate that 5 to 10 percent of worldwide air pollution mortalities are due to biomass burning. That means that it causes the premature deaths of about 250,000 people each year,” the paper’s author Mark Jacobson with Stanford said.

Earlier this year, the World Health Organization (WHO) estimated that air pollution is currently the world’s biggest environmental killer. According to the group, in 2012 air pollution was responsible for seven million deaths—over 12 percent of the total deaths that year. Air pollution, including from biomass burning, has been linked to respiratory and cardiovascular diseases, as well as cancer.

Jacobson employed three-dimensional computer modeling to determine the various impacts of biomass burning, seven percent of which can be attributed to natural wildfires and 93 percent to human causes. 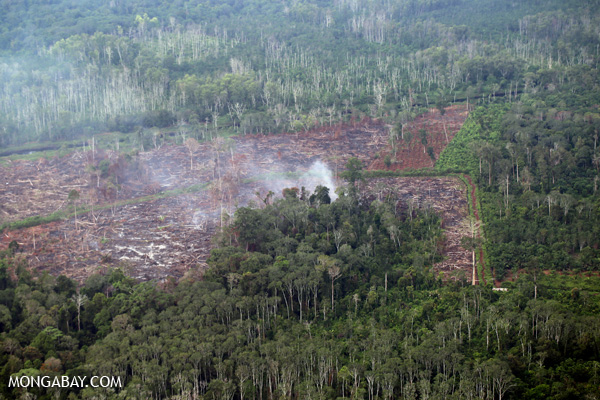 Peat fire in Sumatra. Such fires are used to clear forests and vegetation for agriculture but release CO2 and cause haze far-and-wide. In recent years, such burning in Indonesia has led to health concerns across Southeast Asia. Photo by: Rhett A. Butler.

In addition to public health issues, biomass burning has a big warming impact on the globe. Jacobson found that around 18 percent of the world’s human-caused C02 emissions stem from biomass burning, representing nearly 8.5 billion tons of CO2 annually.

Still, the total warming impact of biomass burning is actually greater than these figures show. For one thing, biomass burning also releases brown and black carbon. These speed up the dissipation of clouds, which have a cooling effect during the day. Black and brown carbon also impact the ability of snow and ice to reflect the sun ray’s back to the atmosphere.

“Because carbon is dark it absorbs sunlight, causing snow and ice to melt at accelerated rates,” explained Jacobson. “That exposes dark soil and dark seas. And again, because those surfaces are dark, they absorb even more thermal energy from the sunlight, establishing an ongoing amplification process.”

Yet here the situation gets complicated. Biomass burning also produces white and gray carbon, both of which actually have a cooling effect. These light-colored particles reflect sunlight back into the atmosphere and enhance clouds, rather than dissipate them like black and brown carbon.

But the overall impact of biomass burning is still warming. Over a 20 year modeling scenario, Jacobson found that biomass burning raises global temperature 0.4 degrees Celsius even when accounting for the cooling effect of white and gray carbon. When factoring in other greenhouse gases, the temperature rises almost 1 degree Celsius.

Yet, biomass burning is often used as a commercial energy source, whether burned directly for energy—usually wood or woody debris—or turned into biofuels. Such energy sources are often touted as “environmentally-friendly,” but Jacobson says this just isn’t so.

“The bottom line is that biomass burning is neither clean nor climate-neutral. If you’re serious about addressing global warming, you have to deal with biomass burning as well.”

(07/22/2014) The Government Regulation on Peatland Ecosystem Protection and Management, initially drafted by the Ministry of Forestry in 2013, is getting mixed acceptance from civil society. On one hand, the regulation would offer more protection to the country’s vast peatland areas. However, on the other, some NGOs have slammed the draft as a potential source of new conflicts for local people.