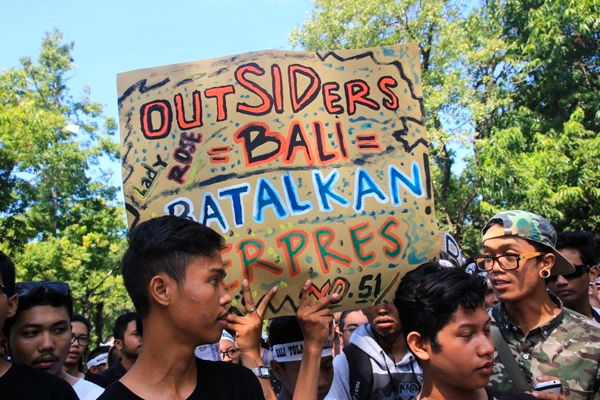 Protesters in Bali in June 2014. Photo by Anton Muhajir.

In a reversal sparking outrage from locals, and concern from environmentalists, the Governor of Bali, Indonesia has given the green light to a controversial development project in Benoa Bay. The plan would convert 700 acres of theoretically protected mangrove and ocean front into a tourist haven of golf courses, hotels, luxury shopping and attractions rumored to include a race track and theme park. The project moved a step closer to reality when Governor Pastika reversed his 2013 rejection of the proposal—which he initially approved in 2012. The move has sparked a series of protests and demonstrations by local citizens and environmental groups concerned that the development will kill livelihoods and destroy the fragile marine ecosystem.

The plan was initially approved in 2012 after a 73 page feasibility study, conducted by researchers at Udayana University, claimed that among other benefits, the development would provide protection against tsunamis since the mangrove swamp would be back-filled to five to six meters higher than current levels. The study was reportedly conducted under an MoU with the developer.

Shortly after the permit was granted, environmental groups questioned the validity of the study’s findings, citing conflicting evidence that the development would be an ecological disaster.

The Indonesia country executive director of Conservation International, Ketut Sarjana Putra, spoke out against the plan last year after models showed the project would potentially interrupt the water cycle, resulting in a back-flow of seawater that could inundate low-lying areas of Kuta and Denpasar.

“There are four water catchments in Benoa. Reclamation would disrupt the flow of seawater and cause backwash,” Ketut is quoted as saying by the Jakarta Post (2013-08-02). “If the planned 838-hectares reclamation takes place, which will convert 75 percent of the area into land, the sea level could increase by 1.6 meters.”

Further, he said, “the whole marine ecosystem in Benoa, especially the coral reefs, is highly prone to fine particles of sediment. Reclamation in the area will bring fine sediment particles and cover the underwater area, and cause the coral to die.” 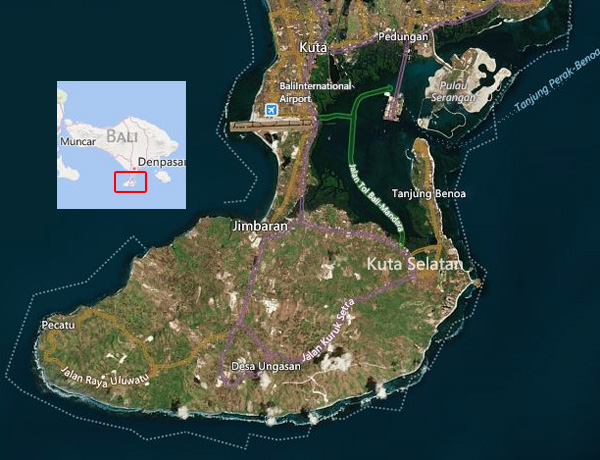 Bing / Microsoft / Nokia image and map showing the location of the contested site.

In the face of mounting opposition to the plan from his constituents, Governor Pastika revoked the permit in late 2013.

Commonly in Indonesia, different levels of government have separate, sometimes conflicting laws governing a single area of land. Although there is no unified law in Bali regulating coastal zoning, the spatial planning bylaws of both Badung Regency and Denpasar municipality designate Benoa Bay as a conservation area.

According to the Jakarta Post, the revision removes the articles which declare Benoa Bay a conservation area, while adding language to allow development in “part of” surrounding protected lands. In addition, the 1,375 hectare Taman Hutan Raya Ngurah Rai mangrove forest is stripped of its protected status, while the coastal area of Benoa Bay is downgraded from a “water conservation area” to a “buffer zone”—allowing for activities to “revitalize” the area, including the reclamation of 700 hectares Benoa Bay. 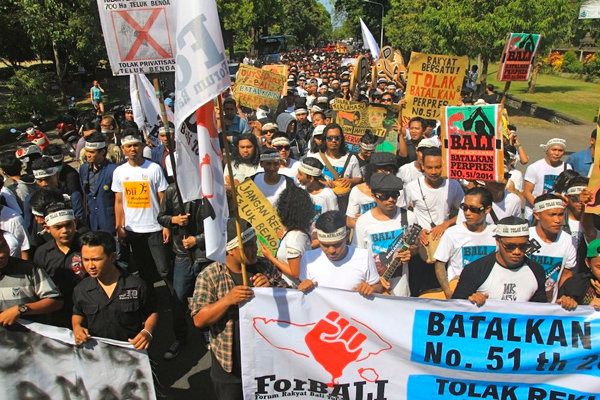 In response to this decree, activists have staged a series of protests and demonstrations in an attempt to get the governor to reverse his decision once again. The protests have included everyone from local fishermen to artists and rock bands to activists and environmentalists. The group ForBali has stated they are preparing a suit they will will file with the Supreme Court to revoke the development plan, while a Change.org petition has collected over 8,000 signatures.

In addition to the conservation value of the area, several villages rely on fishing in the bay for their livelihood. The area is one of the remaining places in southern Bali that has not been completely inundated by development.