This is the second part of series examining the impact of forest loss on Siberian tigers. Part I discussed overall forest loss in the region and its major drivers.

The very fact that there are Siberian tigers in the world today is something of a miracle. In the 1940s, just 20 animals remained in the wild. Indiscriminate hunting and poaching had nearly wiped out the world’s largest cat. Creation of the 4,000-square kilometer (1,544-square mile) Sikhote-Alin Biosphere Reserve and careful conservation policies have helped the tiger population bounce back. There are now about 400 adult and subadult tigers in the wild.

But the subspecies is not yet on safe ground. According to Wildlife Conservation Society (WCS) Russia, between 20 and 30 tigers are poached every year. Illegal logging is reducing the tigers’ habitat, and illegal hunting is reducing its food supply. However, these are not the only threats to wild tiger survival — other problems are cropping up and taking a toll on the iconic big cat.

Siberian tigers (Panthera tigris altaica) rebounded from a low of 20 in the wild in the 1940s to around 400 today. However, they are still threatened by habitat loss, poaching, and other issues. Photo by Rhett A. Butler.

In other species, this can cause abnormalities. For instance, African cheetahs have sperm abnormalities and the Florida panther has kinked tails, both indicative of low genetic diversity. Physical deformities have not been observed in the Siberian tiger as of now, but this may change with future generations. The same study found that Siberian tigers exist in two populations: the majority live in the Sikhote-Alin mountains, and about 20 live in Southwest Primorye, near Russia’s border with China. There is hardly any connectivity between the two populations, making interbreeding between them unlikely.

However, some studies have shown traces of connectivity between Chinese and Russian Siberian tigers.

“Based on our monitoring along the boundary, we have seen that tiger movements between China and Russia are more frequent after the Chinese Grain for Green Program, which would support the tiger’s prey for long term,” she added. Through the program, 8.2 million hectares of cropland in China were reconverted to forest, according to a report from the China Policy Institute in the UK.

However, deforestation is occurring in Primorsky, which may be further reducing their habitat and barring genetic exchange between the animals. According to the forest-monitoring site Global Forest Watch, the Sikhote-Alin Mountains and surrounding areas encompassing tiger range lost approximately 550,000 hectares of forest between 2001 and 2013, which represents about two percent of the area’s tree cover. Deforestation has occurred both within and outside intact forest landscapes, and within and outside protected areas. Much of the forest loss has come about to illegal logging, which is rampant in the region. A 2002 report from WWF Russia estimates 50 percent of timber from Primorky — one of the main timber sourcing areas of the Russian Far East — was harvested illegally. Conserving these forests to encourage tiger movement and increase prey populations is crucial in conserving the tiger long term. 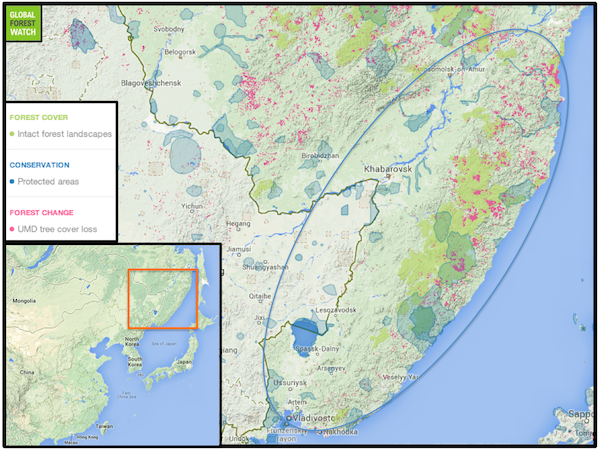 Primorsky Krai (circled) holds the world’s last Siberian tigers. Yet, the area is the biggest source of timber in the Russian far east, much of it harvested illegally. Between 2001 and 2013, Primorsky and its surrounding area lost about 550,000 hectares — or two percent — of its forests. Map courtesy of Global Forest Watch. Click to enlarge. 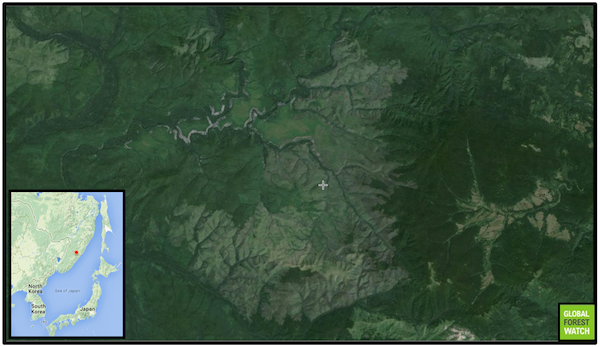 A satellite image of a portion of Siberian tiger range denuded of trees. Courtesy of Global Forest Watch. Click to enlarge.

The added threat of climate change

Historically, Amur tiger habitat would have extended over a greater area than what is seen now. A recent study using a technique called “niche modeling” has shown that potential tiger habitat included a large area in the southeastern Russian Far East and some patches near the border between North Korea and Northeastern China. Niche modeling uses information regarding sightings of tigers, including tiger signs like pug marks and scat, to determine parameters that define the preferred habitat of a species. These parameters, like temperature, precipitation, humidity, forest cover, etc., are available as global datasets. Using the coordinates of different sightings, areas that fit the criteria required by a species are marked as potential habitat.

Today’s highest quality habitat for Siberian tigers is in the Sikhote-Alin Mountains and the southeastern coastal area of the Russian Far East. Suitable habitat in China and North Korea were found to be small, fragmented and of relatively low quality. Regions with high human density and disturbance do not make suitable habitat for the Siberian tiger, indicating that one of the main requirements for habitat, apart from climate and topography, was low human density.

Because of climate change, researchers predict the Russian Far East will become less suitable for tigers, with their preferred Korean pine forest cover replaced by spruce and fir trees as the region warms. These forests are not high-quality habitat for tigers as prey densities are usually low. Because of these trends, some models predict Siberian tigers could be extinct in the wild within a century.

In addition to the collateral damage of climate change, prime tiger habitat is also threatened directly by human impacts. For instance, selective logging of Korean pine, a highly sought-after market species, is thinning the tiger’s preferred type of forest in some areas.

In 2001, reports started coming in of Siberian tigers behaving unusually and entering human habitations and roadways, which they usually avoid. Morbillivirus, a group of viruses that includes distemper, was detected in Siberian tigers in 2004; there has also been a sudden decline in tiger numbers in the Russian Far East since 2009. This led to concerns that canine distemper virus could be affecting the Siberian tiger; in response, researchers set out to determine if Siberian tigers are being affected by disease. Their results were published in MBio in 2013.

The research team examined tissue collected from necropsies of five adult, free-ranging tigers. All tigers were encountered in the wild when they were disoriented and losing control of their nervous systems, both characteristic symptoms of a distemper infection. Tissue analysis and genetic tests both confirmed that the tigers had contracted distemper. The genetic makeup of the virus strain that had infected the tigers was similar to strains commonly seen in the Arctic region, as well as to those from China, Russia, Greenland and the United States.

Canine Distemper Virus (CDV) is a common cause of death in domestic dogs. However, in Russia, vaccination of dogs against CDV is not very common. According to the study, direct transmission of CDV to tigers from dogs and other carriers like raccoons is probably the most likely source of infection. This correlates with reports of tigers encountering and killing domestic dogs. Although there are vaccines against CDV that can prevent transmission of the disease, implementing control strategies in the wild is difficult, especially for a reclusive species like the Siberian tiger.

While five dead animals may seem like a low number, it represents a big toll on such a small population — the authors estimate distemper killed off about one percent of wild Siberian tigers in 2010. Their results indicate the disease is widespread in the Russian Far East as the five tigers used for the study were from different territories spread over a large portion of the region. And while it remains unclear when exactly CDV started affecting tigers, evidence points to a fairly recent emergence.

“Our results, which include mapping the location of positive tigers and recognition of a cluster of cases in 2010, coupled with a lack of reported CDV antibodies in Amur tigers prior to 2000 suggest wide geographic distribution of CDV across the tiger range and recent emergence of CDV as a significant infectious disease threat to endangered Amur tigers in the Russian Far East,” the authors write.

Habitat loss, a small gene pool, disease, poaching – Siberian tigers cling to existence amidst a suite of interconnected problems. However, NGOs, government agencies, and scientists around the world are working to save the species through efforts such as monitoring programs, proposed introductions to less-disturbed areas, and policies aimed at curtailing demand for illegally harvested wood.

As Dale Miquelle, Director of the Wildlife Conservation Society Russia Program, and colleagues write in their 2010 book, “…there is sufficient reason for optimism that this northernmost representative of Pa. tigris will continue to roam the forests of north-east Asia, interacting with natural prey and exposed to the full spectrum of natural forces that it has survived in for so long, if humans can provide the minimum requirements of space, undisturbed habitats, and freedom from direct human persecution.

“It is a simple recipe, if we have the collective societal will to make it happen.”