The current economic, political, and environmental landscape of the Amazon is complicated at best. Protected areas have swelled in recent decades, indigenous rights have been improved in some places, while investments by both foreign and domestic financiers in large-scale energy and infrastructure development have raised questions about their environmental and social impacts in the world’s largest rainforest. Mongabay.org’s Special Reporting Initiative (SRI) program has recently awarded two different reporting prizes to journalists to tackle these vital and complicated issues in-depth.

A journalist with over 20 years experience reporting on the environment in South America, Barbara Fraser will explore the Amazon’s growing system of protected areas and their impacts on life in the region. In many cases, the mission of Amazonian protected areas has expanded from biodiversity conservation to improving human welfare. However, given the multiple purposes and diverse management of many of these area, it is often difficult to measure their effect on human populations. Fraser’s reporting will ask: what are the true effects of Amazonian protected areas on people, both locally and globally? 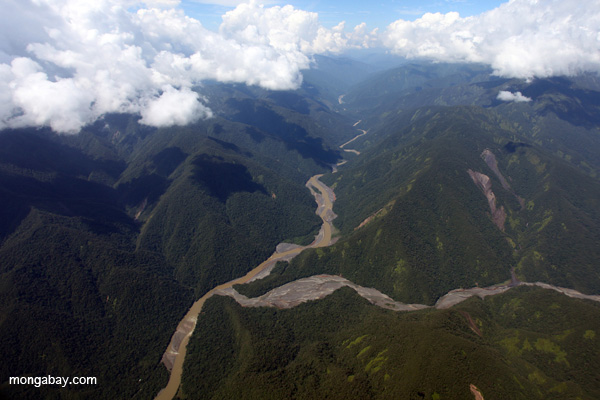 Photo by Rhett A. Butler / mongabay.com

Meanwhile, in an exciting partnership, Mongabay.org’s SRI program has awarded Brazil’s Agência Pública an increased prize to publish articles in both English and Portuguese on the Brazilian Development Bank (BNDES) role in the Amazon. BNDES, which now lends more money than the World Bank, has been expanding its funding of large-scale energy and infrastructure development across the Amazon. The Pública team will specifically look into the BNDES’s investment in one of the Amazon’s last wild river watersheds – the Tapajós in the Brazil. The area has been targeted for a complex of large hydroelectric plants, some of which are located in protected areas and indigenous territories. The resulting bilingual reporting will not only add to the global discussion on this important issue, but also contribute to the local dialogue.

More opportunities for in-depth, quality environmental journalism from mongabay.org are on the horizon. Applications are currently open for two more reporting opportunities, one of which is also on the topic of the social and environmental impacts of foreign development finance in the Amazon. The Amazon is fed by many watersheds in the Northern Andes, but with the rise of large-scale infrastructure projects in the region–including several hydroelectric dams–the ecological stability of much of the Amazon basin is at stake. This new SRI will explore how foreign financing–both from Brazil and China–is changing the landscape of the Western Amazon. This award also offers an increased prize for teams that plan to publish in both English and Spanish. Photo by Rhett A. Butler / mongabay.com

The other SRI opportunity currently accepting applications will look at the current food-waste situation in Sub-Saharan Africa. A recent report estimated that up to half of the world’s food ended up in the waste-basket. In wealthy countries this food is often thrown away at the consumer and retail level due to over-buying, huge portions, or cosmetic food appearance standards. But in poorer countries, such as many in Sub-Saharan Africa, food ends up being lost before it even reaches the table due to lack of infrastructure, poor refrigeration, or unreliable transportation. The reporting will highlight potential improvements in bringing food to the table in these countries. These changes could go a long way toward solving the world’s most intractable and long-standing food crisis, while greatly improving the quality of life–and the future prospects–of the region.

Journalists are encouraged to apply for these awards by the deadline: Sunday, August 24th, 2014. Learn more about about how to apply here.