Uganda’s Kafu River, which is about 180 kilometers (110 miles) long, is part of a vast chimpanzee habitat that includes Budongo and Bugoma Forest Reserves, as well as several unofficial protected areas. However, this region is losing a significant portion of valuable chimpanzee habitat, with Global Forest Watch data showing at least 20 percent of the forest cover along the Kafu River in western Uganda has disappeared since 2001.

The region as a whole accommodates at least 5,000 endangered eastern chimpanzees (Pan troglodytes schweinfurthii), with about 600 inhabiting the River Kafu basin. 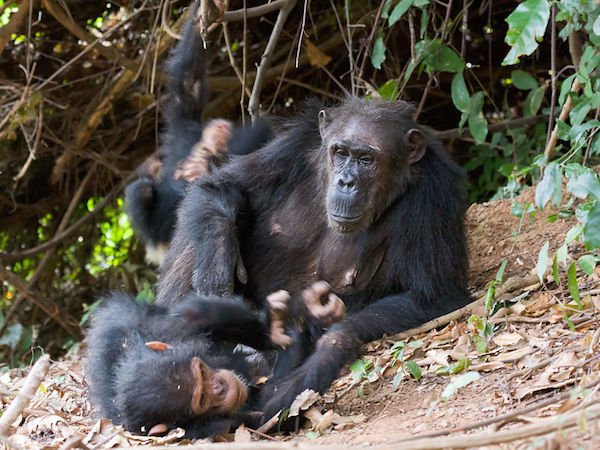 Eastern chimpanzees (Pan troglodytes schweinfurthii) have experienced recent declines throughout their range. In Uganda, they are restricted to the west, where much of the country’s deforestation is occurring. Photo by Ikiwaner.

According to the deputy director for conservation at the Uganda Wildlife Authority, Charles Tumwesigye, the loss of forest cover along its basin is largely due to population pressure on the land. He said a significant amount of forested land in this region has been cleared by migrant communities from southwest Uganda.

“A lot of migrants have come from the southwest and they just clear forests for agriculture,” Tumwesigye said. “People easily move there because they say it is free land. That is causing a huge problem.”

Additionally, according to Tumwesigye, much of the land along the Kafu River is privately owned. That amount of control allows locals to fell trees whenever population pressures compel them to clear more land for cultivation.

However, humans aren’t the only apes that live in the basin and depend on its forests.

“Chimps have been there from time immemorial but because of pressure from the increasing human population, people are cutting all the forests to create land for cultivation and settlement,” he explains.

Forests along rivers provide especially good habitat for chimpanzees. A survey conducted in Uganda in 2012 found the density of fruit trees to three times higher along rivers than further inland, which, researchers believe, leads to the higher numbers of chimpanzees observed living near rivers.
However, fewer and fewer chimps are found as their habitat is destroyed. Matthew McLennan of Oxford Brookes University in the United Kingdom, who has studied western Uganda forests, lamented “the extent of recent, ongoing and seemingly unregulated forest clearance” in the area.

“All forest was highly degraded,” he writes in a report describing the region. “Along the Rwamatonga, Hoima and Waki rivers forest was being burnt and cleared completely by farmers planting cash crops such as tobacco and rice, exposing wide stretches of riverbank. Men engaged in pit-sawing, charcoal production and distilling were encountered inside the forest throughout the survey area.”

As forests are fragmented by clearing, chimp populations are becoming more isolated from one another, according to wildlife scientists. Such isolation prevents mixing, which, in many species, leads to inbreeding depression, a condition in which harmful genes eventually crop up due to the mating of related individuals. However, instead of inbreeding, chimpanzees simply stop reproducing.

“These forests used to be connected in the past but with the influx of human activity, a lot of fragmentation has been going on,” Dr. Pantaleon Kasoma, Executive Director of the Jane Goodall Institute in Uganda, told mongabay.com. “Once certain populations [of chimpanzees] get isolated, because of [their dislike for] inbreeding, their viability reduces.”

Of the approximately 90,000-hectare area of the upper Kafu River basin, more than 17,000 hectares of forest were lost between 2001 and 2013, according to data from Global Forest watch. 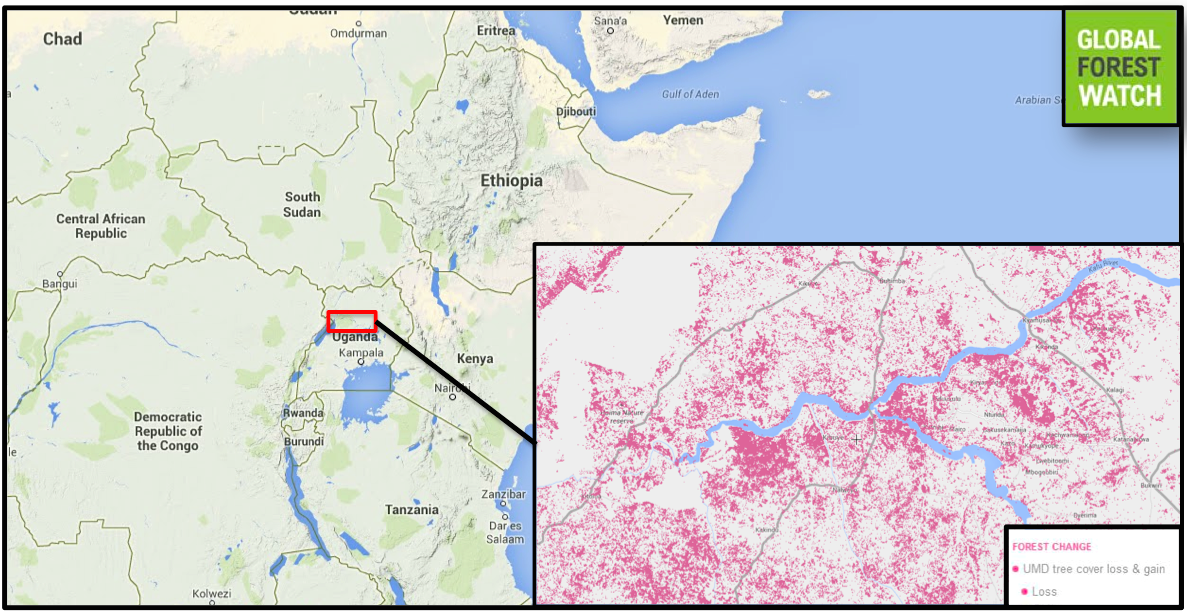 Some portions of Kafu’s riverbanks have lost almost all of their forest cover. Deforestation also impacts the health of rivers themselves; without tree roots to bind the soil, sediment is eroded into rivers, sullying their water and absorbing heat, making them inhospitable for species that evolved to live in cold, clear water. Click to enlarge.

The deforestation along the Kafu River is not isolated. Throughout western Uganda, as in most parts of the country, deforestation rates have been high over the last decade. According to the Food and Agriculture Organisation (FAO), Uganda loses 2.2 percent of its forest cover annually, one of the highest annual deforestation rates in Africa.

According to Tumwesigye, authorities in Uganda have not been able to stem deforestation in the river basin because their hands are tied.

“These areas are privately owned,” he said. “Because these areas are not gazetted, we don’t have strong mechanisms to stop that destruction.”

However, efforts to reforest some of the lost forest cover between Budongo and Bugoma forests lend hope that perhaps some of the deforestation along the Kafu River can be remedied.

Over the last two years, two organizations – the Jane Goodall Institute and the Chimpanzee Sanctuary and Wildlife Conservation Trust (CSWCT) – have worked to re-establish a series of “forestry corridors” to link separated populations of chimpanzees.

“The idea is to maintain some sort of connectivity between the forest blocks so that the movement of some females and males enables genetic mixing among the chimpanzees,” Kasoma said.

In one of the initiatives, called the Sustainable Livelihoods Project, wildlife conservation groups established tree nurseries in local villages and encouraged community members to plant them within 30-meter (100-foot) buffers on either side of area rivers such as the Rwamatonga and the Waki.

However, some locals initially resisted the idea. According to Kasoma, they argued that planting the trees would deprive them of the land on which their livelihoods depend. 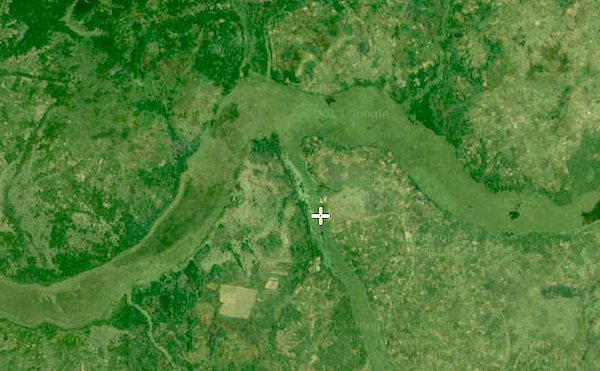 Finding a win-win solution required some ingenuity. The two organisations partnered with Heifer Project International to offer high quality goats and pigs to local farmers who agreed to plant trees along riverbanks on their land.

“It was some sort of trade off,” Kasoma said. “We told them, ‘If you behave responsibly, we will give you improved goats.’ It worked. After three years, we did notice a difference.”

Other incentives the two organizations offered to locals included drilling boreholes and protection of water wells, provision of facilities for bee-keeping, and education of farmers on better farming methods.

According to Kasoma, although the results of such initiatives have generated mostly positive results, they had to end some programs due to lack of funding. Resource constraints also meant the organizations could not extend the reach of the projects to other affected areas, such as the Kafu River basin.

“It is not that we didn’t want to work in the River Kafu basin,” Kasoma said. “It is just that the resource envelope could not permit us to spread out so wide so we tried to concentrate around the major forest blocks.”

(12/02/2013) The image of a rare dormouse has won the fourth annual BBC Wildlife Camera-Trap Photo of the Year award. Photographed in Turkey, the Roach’s mouse-tailed dormouse (Myomimus roachi) is listed as Vulnerable by the IUCN Red List with its habitat rapidly disappearing for agriculture. The photo took the grand prize out of 850 entries from around world in a contest that takes into account the scientific importance of submitted photos.

(11/25/2013) There are many ways in which people practice conservation. The most well-known are working to save species in the field or setting up protected areas. But just as important—arguably more important for long-term conservation success—is conservation education, especially with children. Anyone who grew up watching David Attenborough documentaries, reading Gerald Durrell books, or simply exploring ecosystems on their own can tell you how important it is to encounter the wonders of wildlife at a young age. And for many of us most of our first encounters with wild animals are in illustrated books. Eric Losh’s new book, The Chorus of Kibale, not only provides an educational opportunity for children to become acquainted with the many animals in Kibale National park in Uganda—through wonderful pictures and sounds—but proceed also go directly to two conservation groups working in the region, U.N.I.T.E. for the environment and the Primate Education Network (PEN).