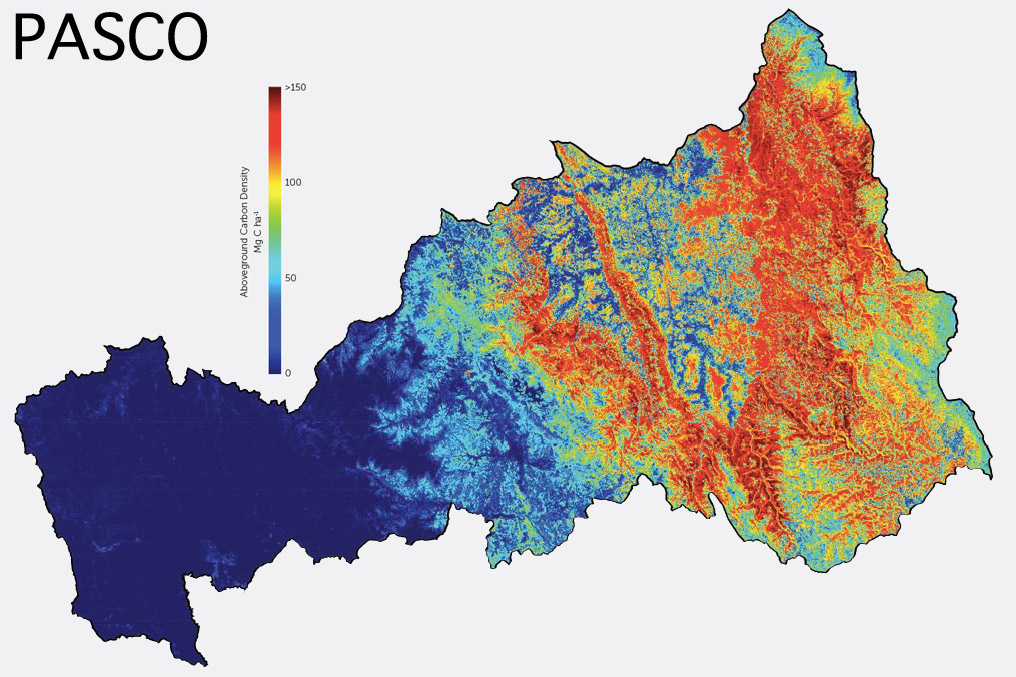 Peru’s landmass has just been mapped like never before, revealing important insights about the country’s forests that could help it unlock the value healthy and productive ecosystems afford humanity.

The research — involving scientists from the Carnegie Institution for Science at Stanford University, Wake Forest University, and Peru’s Ministry of Environment (Minam) — assessed the aboveground carbon stock of all vegetation types across the country using a combination of data from satellites and Carnegie’s advanced laser-based carbon detection system, ground-truthed with data from field studies.

The resulting map is a stunning kaleidoscope of color, ranging from deep red in carbon-dense forests of the Amazon to the cold dark blue of areas devoid of vegetation like heavy gold mining areas and Andean peaks. 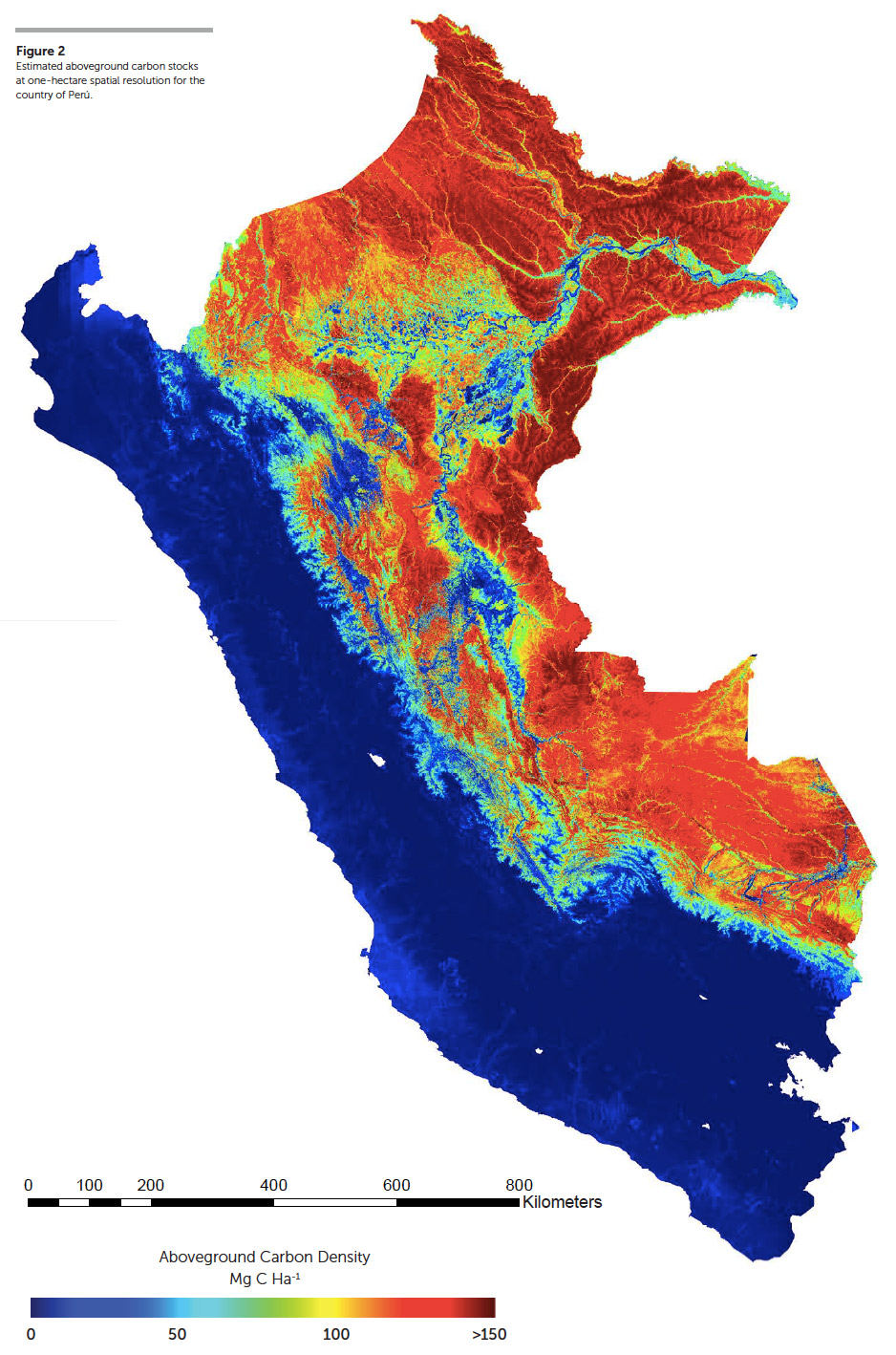 The new report maps all of Peru’s ecosystems.

But beyond its visual appeal, the map provides critical information at a one-hectare scale relevant for policymakers and scientists. The study found that vegetation in Peru stores some 6.9 billion metric tons of aboveground biomass, or roughly equivalent to nearly twice the combined annual carbon emissions of the U.S. and China, and documented ecosystem gradients that underpin the country’s rich biodiversity. For example, it found that the lowlands of southern Peru harbor significantly less carbon compared with other rainforest areas due to extensive areas of bamboo. Terra firme forests store more than twice as much carbon as active floodplain forests. 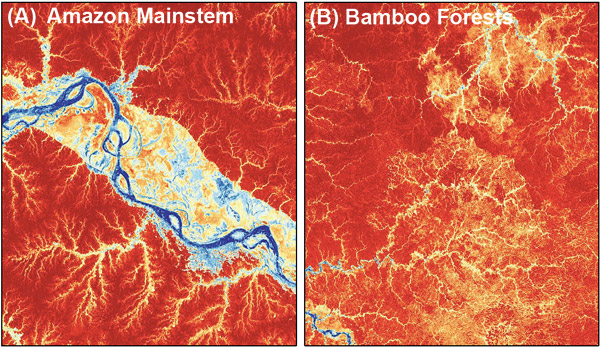 The report compares the carbon storage of different vegetation types.

The research tied vegetation data to administrative units and protected areas, including national parks and communal reserves. It found that Loreto contains more than half the country’s total aboveground carbon stock, while Peru’s protected areas store a combined 26 percent of its carbon. That means nearly three-quarter’s of Peru’s carbon is found outside protected areas, underscoring the importance of maintaining those carbon stocks, according to the authors.

“The international community wants to use a combination of carbon sequestration and emissions reductions to combat climate change,” said Carnegie’s Greg Asner, the study’s lead author, in a statement. “Our cost-effective approach allows us to accurately map the carbon in this incredibly diverse country for the first time. It opens Perú’s door to carbon sequestration agreements and is an enormous boon to conservation and monitoring efforts over vast areas for the long term.” 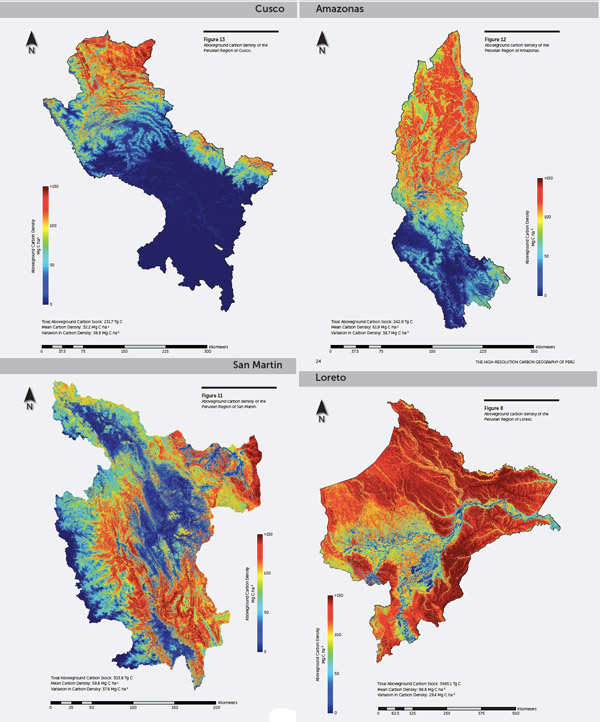 “Now every person in private enterprise and decision makers in regional, local, and national government has an estimate of carbon content for every place in Perú. It should ignite the imaginations of ecologists and earth scientists, and provide a road map for decision makers,” Silman said. “The report also adds another exclamation point to the value of protected areas. If you choose carbon as your currency, parks in Amazonian Perú are the banks, and the bigger the area, the closer it gets to being Fort Knox.”

CITATION: Gregory P. Asner et al (2014). The High-Resolution Carbon Geography of Perú. A Collaborative Report of the Carnegie Airborne Observatory and the Ministry of Environment of Perú. July 2014.