In recent years the evidence has piled up that neonicotinoids—a hugely popular group of pesticide—may be at least partly responsible for ongoing bee and pollinator collapse. But new research in the journal Nature find that these pesticides could also be taking a heavy toll on other species, in this case common birds.

Using longterm data of bird populations in the Netherlands, researchers found that where water samples showed high contamination levels of imidacloprid, a neonicotinoid pesticide, bird populations plunged. The scientists could find no other explanation—including habitat loss—for the decline in birds that are abundant elsewhere.

According to lead author, Hans de Kroon from Radboud University, their research took an unusual approach on the impact of neonicotinoids.

“All the other studies build up from toxicology studies. But we approached this completely from the other end. We started with the bird population data and tried to explain the declines,” de Kroom told the Guardian. “Our study really makes the evidence complete that something is going on here. We can’t go on like this any more. It has to stop.” 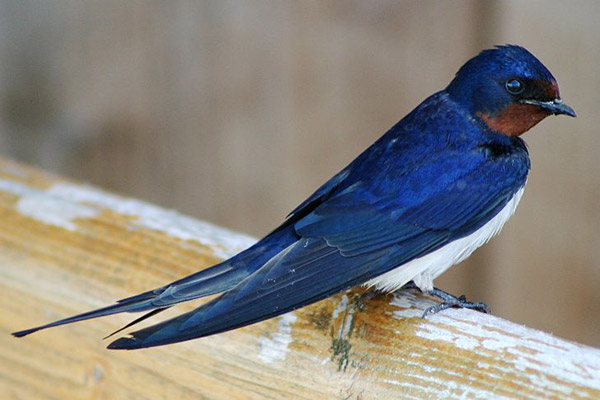 The barn swallow was one of 15 birds studied by the scientists. Photo by: Malene Thyssen/Creative Commons 3.0.

The researchers believe that at such levels the pesticides are wiping out many of the insects the birds depend on, especially for reproduction, essentially starving out the population. Although it’s possible the pesticides are harming the species in other ways, though more research would be required. In all scientists measured declines in 14 insect-eating birds out of the 15 species surveyed.

The researchers note that if vanishing insects are hurting bird populations, the trend would likely also impact other animals, such as bats and other insectivores. However, whether or not the pesticides are directly impacting the birds would require more research.

The most heavily used pesticides in the world today, neonicotinoids employ a nerve agent similar to nicotine to tackle crop pests. While the pesticides don’t usually kill pollinators outright, scientists are increasingly convinced that they have longterm impacts on them, affecting behavior to such an extent that populations collapse over time. Neonicotinoids are commonly spread on the seeds of plants and it is thought the chemicals linger in the soil and water for years after use.

“One after another, new studies are revealing the extreme hazards these poisons pose for pollinators and the environment,” said Jonathan Evans with the Center for Biological Diversity in response to the new research. “It’s time we learn from the mistakes in our past with these dangerous pesticides and stop recklessly approving toxics at the behest of chemical companies.”

The pesticides may also be unsafe for humans. A research review by the European Food Safety Authority (EFSA) last year found that neonicotinoids may harm human learning and memory. The pesticides have long-been billed as being both environmentally-safe and less hazardous to mammals than older pesticides, but rising evidence suggests longterm impacts that were never thoroughly tested in trials. 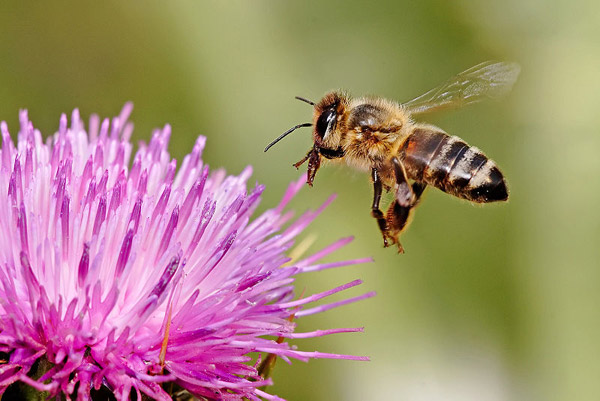 Honeybee on a milk thistle flower. Photo by: Fir0002/Flagstaffotos/GFDL v1.2.

Last year, the EU installed a partial ban on the use of neonicotinoids for two years, a decision that pesticide companies have condemned. Meanwhile, last month President Obama issued an Executive Order to investigate pollinator health, including reviewing the impact of neonicotinoids. Unlike the EU, the U.S. has not banned the chemicals use on any crops and any federal review is likely to be years away from completion.

Yet, a recent independent review by 29 scientists via the International Union for the Conservation of Nature (IUCN) found sufficient evidence of neonicotinoid harm to warrant urgent action. Looking at 800 studies, the researchers found that not only were neonicotinoids harming bees, butterflies, and other pollinators, but also earthworms, birds, snails and other invertebrates.

“The evidence is very clear. We are witnessing a threat to the productivity of our natural and farmed environment equivalent to that posed by organophosphates or DDT,” said one of the researchers, Jean-Marc Bonmatin with the National Centre for Scientific Research. “Far from protecting food production, the use of neonicotinoid insecticides is threatening the very infrastructure which enables it.”

Pesticide companies continue to deny that neonicotinoidsare harming pollinators or birds for that matter. A spokesperson for Bayer said the chemicals are “safe to the environment when used responsibly according to the label instructions.”

However, increasingly scientists are attacking such claims.

“We need to identify when [neonicotinoids] are important [to crop yields] and restrict use to those sites; it’s not difficult,” Dave Goulson from the University of Sussex, who was unaffiliated with the study, told the BBC. “You need to do field trials, and try not using the neonicotinoid seed dressing. If you don’t get a reduction in yield then stop using the bloody things; its not rocket science!”

(12/23/2013) Neonicotinoid pesticides, which have been increasingly blamed for the collapse of bee populations, may also impact human’s developing nervous system, according to a review of research by the European Food Safety Authority (EFSA). The EFSA says that current safety guidelines for two pesticides—acetamiprid and imidacloprid—may be too lax to protect humans, especially the developing brains of unborn children

(08/21/2013) As the world’s population increases and agricultural frontiers expand into native tropical habitats, researchers are working furiously to understand the impacts on tropical forests and global biodiversity. But one obvious impact has been little studied in these agricultural frontiers: pesticides. However a new study in the journal Philosophical Transactions of The Royal Society B seeks to shine a light on the problem.

(05/29/2013) On 15 April more than 100 fishermen demonstrated in the streets of Fort de France, the main town on Martinique, in the French West Indies. In January they barricaded the port until the government in Paris allocated €2m ($2.6m) in aid, which they are still waiting for. The contamination caused by chlordecone, a persistent organochlorine pesticide, means their spiny lobsters are no longer fit for human consumption. The people of neighboring Guadeloupe are increasingly angry for the same reason. After polluting the soil, the chemical is wreaking havoc out at sea, an environmental disaster that now threatens the whole economy.