Commentary by Daniel Stiles on 9 July 2014

In what appears to be corruption in high places, the international body charged with protecting endangered species has turned a blind eye to massive illegal trade of endangered Great Apes. This was my distinct impression on reading the Great Apes report prepared by the Convention on International Trade in Endangered Species (CITES) Secretariat for the 65th CITES Standing Committee meeting, which will take place in Geneva in early July this year.

CITES is charged with regulating trade of live wild animals and plants, or their derivative products, in order to protect them from overexploitation. Too much trade could threaten certain species with extinction, which occurred recently with the West African black rhino, shot into oblivion for illegal trade in its horn. 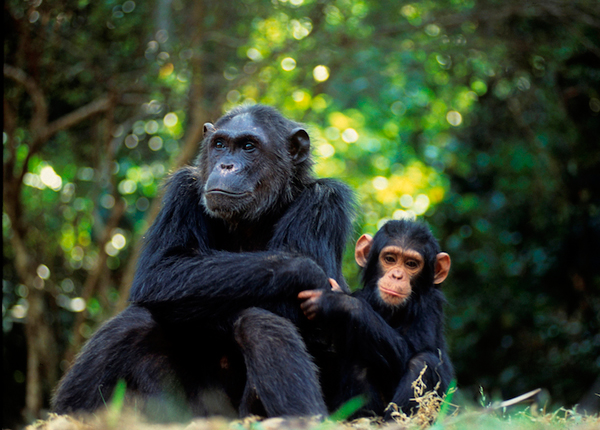 Approximately 22,200 great apes were lost in trafficking related incidents. The report estimates that every year approximately 5% of the total great ape population on Earth is lost due to trafficking. CITES aims to keep endangered great apes in the wild. Photo courtesy of Karl Ammann

The Standing Committee is an important body in the functioning of CITES. It “… provides policy guidance to the Secretariat concerning the implementation of the Convention and oversees the management of the Secretariat’s budget. Beyond these key roles, it coordinates and oversees … the work of other committees and working groups; carries out tasks given to it by the Conference of the Parties; and drafts resolutions for consideration by the Conference of the Parties.”

The Standing Committee also initiates action to suspend trade as a sanction against Parties (i.e. countries) that egregiously break the rules.

Great apes – chimpanzees, bonobos, gorillas and orang-utans – are listed in Appendix I of CITES precisely because they are threatened with extinction. CITES does not allow them to be traded commercially, and any export for other purposes (e.g. scientific research, education, etc.) is strictly controlled. 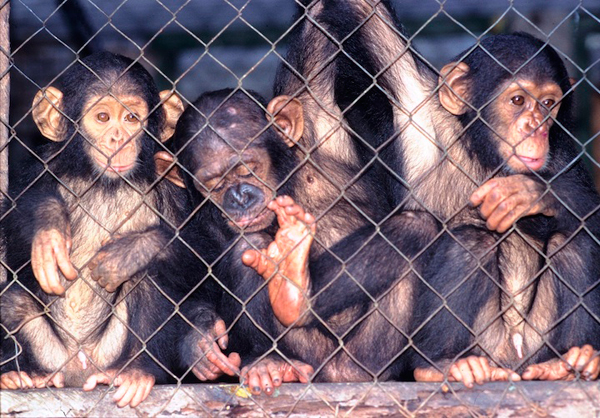 Ape traffickers only want the young, as they are easy to handle and can be trained. Photo courtesy of Karl Ammann.

The key words in this statement are “data from official sources,” which apparently consist of its own Trade Database and reports compiled by INTERPOL and the World Customs Union. “Official sources” seemingly do not include its sister organization within the UN Environment Programme, Great Apes Survival Partnership (GRASP) Great Apes Survival Partnership (GRASP), which is charged with great ape conservation. At the last CITES Conference of the Parties, held in Bangkok in March 2013, GRASP released a report entitled Stolen Apes. This report found that between 2005 and 2011, approximately 22,200 great apes were lost in trafficking related incidents. The report estimates that every year approximately 5% of the total great ape population on Earth is lost due to trafficking. Is that really “limited” and “very little”?

The situation has not improved since then. In June this year GRASP released a press statement asserting that “The illegal trade in live chimpanzees, gorillas, bonobos and orangutans showed no signs of diminishing – and may actually be getting worse.”

How could the CITES Secretariat discount this?

Investigations carried out by Karl Ammann and associates have uncovered and documented several great ape trafficking networks that span many countries in Africa, the Middle East, Russia, and East Asia. Most of the great ape trafficking involves corrupt national CITES officials in Africa selling fraudulent CITES export permits to traffickers, with colluding or inept national CITES officials at the importing end.

Great apes are in huge demand to act as performers in amusement and safari parks, to attract customers to private commercial zoos, and to enhance the prestige of business potentates in private menageries. The key import countries are located in East Asia, the Middle East, and the former Soviet Union. 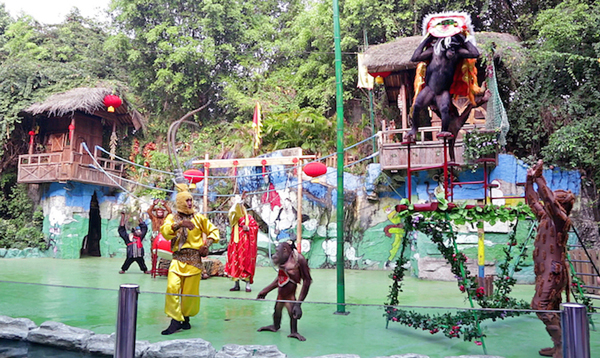 The Guinea trafficked ape orphans ended up in Chinese amusement parks, trained to perform before a fee-paying public. Photo courtesy of Karl Ammann

It appears that the CITES Secretariat is trying to sweep the real extent of great ape trafficking under the carpet in order to avoid the arduous and costly action that would be necessary to clean up the corrupt practices of the various national CITES Management Authority offices.

The biggest headache would be the China office. I worked closely with Karl Ammann over the past two years to unravel the complex evidence trail contained in various CITES reports, the CITES Trade Database, and email communications with both the CITES Secretariat and the China CITES office. We concluded that China was knowingly complicit in attempting to use fraudulent CITES export permits from Guinea to illegally import well over one hundred chimpanzees and ten gorillas since 2007. Thanks in large part to Ammann’s efforts, CITES hit Guinea with a suspension of trade sanction in 2013. No action was carried out against China, however. This is comparable to prosecuting the illegal arms dealer while letting the arms buyer go free.

In spite of Guinea being sanctioned, Ammann has gathered evidence that Guinea wildlife traffickers continue to advertise Appendix I species for sale – including great apes – with CITES export permits, and China continues to import great apes.

There are 32 Party members of the Standing Committee. Will at least one challenge the Secretariat’s biased and self-serving report to initiate serious action to stop the illegal great ape trade?