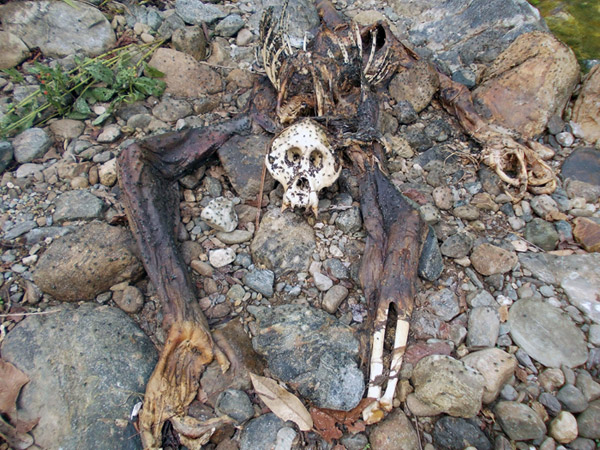 Decomposing carcass of an adult orangutan in the forest of Southwest Aceh. Photos by Leuser Conservation Forum.

The Leuser Ecosystem in Aceh, Indonesia is gaining the attention of international animal traffickers, according to the Leuser Conservation Forum (FKL). From the beginning of 2013, FKL patrols have dismantled 282 makeshift traps targeting high value threatened species, and the situation is getting worse.

“This is a crisis for Leuser,” said Dediansyah, Director of FKL, “We have found many wild animal traps in the forest installed by hunters. Their major targets are tigers and elephants.”

The snares are typically constructed from simple materials of varying size and design depending on the animal. In 2013, FKL patrols dismantled 127 such devices: 43 set for tigers, 32 for birds, 20 for deer, 19 for elephants, and 13 for rhinoceroses. In the first six months of 2014, patrols found 160, suggesting an marked increase in hunting activity.

In addition, FKL patrols have found several orangutan and elephant carcasses, which investigators believe were the victims of hunting. 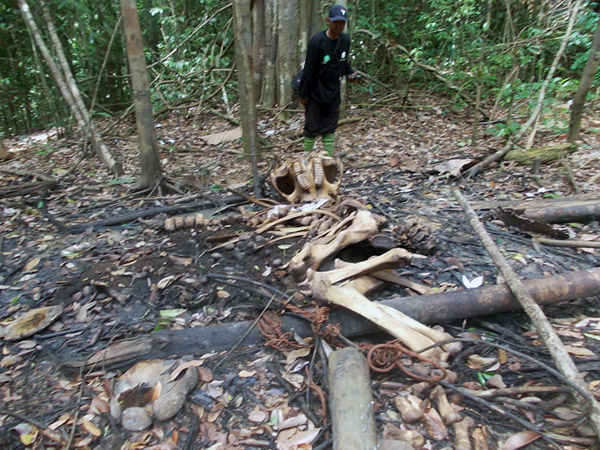 On the south end of Gunung Leuser National Park, FKL investigated four separate elephant carcasses found with their tusks removed. The team discovered large steel cable snares, pit traps, and poison in the surrounding areas. Near one elephant, a large number of bent and broken trees indicate that the animal was caught by its leg, and thrashed about trying to escape until it presumably died from exhaustion.

“[The hunters] seem to know where the elephants migrate,” said Dedi, “and install traps along that route and wait for the elephant to stumble across them.”

According to Dedi, more hunters are coming from outside the region, working in cooperation with wildlife traffickers. In addition to regular hunting for meat and the pet trade, an increased demand for body parts on the international Chinese Medicine market has put pressure on Leuser. Unlike most other forests in Indonesia, Leuser’s wild animal population is still relatively intact and abundant.

In addition to tigers and elephants, other commonly hunted animals include hornbills, deer, and orangutan, while songbirds are regularly trapped for sale in the pet markets.

During the last year, porcupine hunting in particular has seen a sharp increase, with the price for a single animal reaching Rp 300,000 ($26). It is believed that bezoar stones (masses of undigested organic and inorganic material) found inside the digestive tracts of some of these animals have medicinal or magical powers. Reportedly, stones sell in the city of Medan in Indonesia for Rp 5-10 million ($430 – $860) apiece.

Currently, FKL has only eight patrol teams working in cooperation with the Forestry Department to monitor only four of the 13 regencies that comprise the 2.6 million hectare Leuser Ecosystem.