The governing body was formed a mere 13 years ago—a staggering fact for a country made up of two-thirds water where many of the 250 million people depend on fish for both protein and income.

So why has it taken so long for seagoing Indonesians to get their own ministry? For the 35 years of deposed dictator Suharto’s rule, all power and status was concentrated in Java’s urban and military elite. Outer islands and coastal villages, where most seafarers dwelt, stood neglected. Now, nearly one in two Indonesians live on less than $2 a day, according to Asian Development Bank estimates, and the poorest of this population lives in the reef-bound regions of Maluku and Papua.

But, since its establishment in Indonesia’s post-Suharto wave of decentralization, the newly fledged MMAF has been making up for lost time.

So far this “decentralization,” as applied to fisheries, has translated into such measures as augmenting the government’s own over-stretched coastal patrols with locally recruited deputies; building artificial reefs in bombed-out coral patches; restocking seabeds with giant clams; and fronting loans to fishermen for building larger, GPS-equipped vessels, allowing them to venture deeper into the Indian Ocean to chase bigger schools of fish.

All very commendable, says University of Hong Kong marine biologist Yvonne Sadovy. But it’s hardly enough to get to the root of the crisis: species depletion and environmentally destructive fishing practices.

Yet, Sadovy and other experts are convinced that only through a holistic ecosystem-based management approach can Indonesia’s fisheries be restored to sustainability. And the Ministry itself is starting to get the message, as seen in a series of more sweeping recent initiatives undertaken with international and NGO collaboration.

To systematically tackle the problem entails a three-step process. First, the government needs to size-up the extent of overfishing and habitat-destruction with reliable baseline statistics. Next, it should place these numbers in context with a more nuanced understanding of different species interactions in the overall web of oceanic life; Lastly, managers must draw up prudent, effectively enforced harvest limits and no-catch zones. 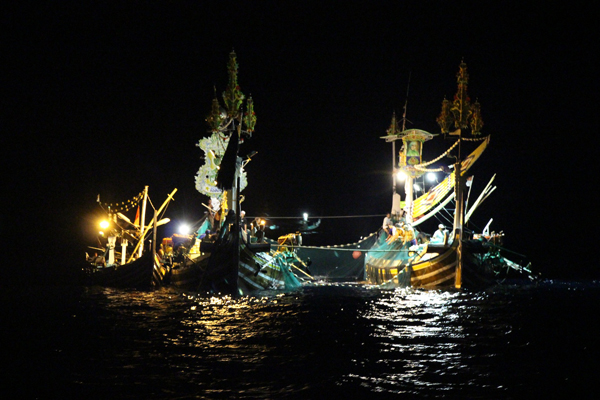 Paired purse seiners make a late-night haul in the Bali Strait with a support boat strapped alongside. Regional fishery ministry officials say they are trying to crack down on the practice of holding multiple boats under a single license. Photo copyright © 2014 Melati Kaye.

Easy enough to list, but each of these steps is daunting in its own right. For example, consider the baseline data on Indonesia’s important sardine fishery, centered in the East Javanese seining port of Muncar. To really get a handle on understanding the sardine population, researchers would need to probe the sea with fish sounders or sample nets. Yet, so far, such scientific government field surveys are rarer in Muncar than the El Nino—decennial at best.

In between such intermittent surveys, official estimates of the sardine catch rely on the fishermen’s own reports and single plates of fish that port officials scoop from wicker baskets of sardines en route to local canneries. So if a fish-transporting pedicab doesn’t happen to pass by the port office, the fish never get tallied.

Neither do all the live-caught wrasse and groupers that are rushed from the reefs of Sulawesi to the banquet tables of Hong Kong, often mislabeled “rock fish” so as to avoid import restrictions, according to Sadovy.

These omissions matter more than just economically. Equally important are their broader impact on the whole complex web of oceanic life: item two on the three-step path to sustainable fishery management. By lopping off either the “trash-fish,” like sardines, at the bottom of a food chain or the “apex predators,” like groupers, at the top, fishermen risk setting off cascading effects throughout the ecosystem. 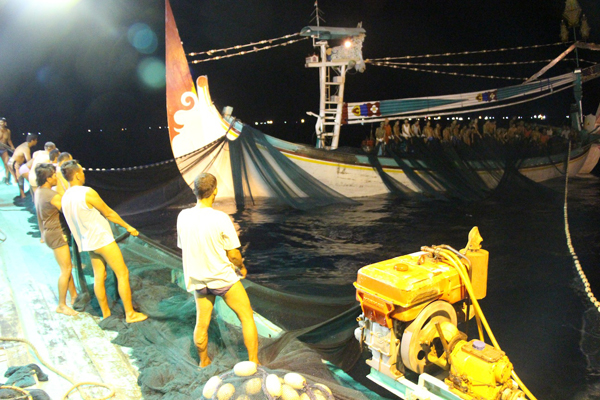 Paired purse seiners in the Bali Strait are usually manned by 55-men-crews. Only after each man has received a plastic bag’s worth of the catch will the remainder be sold to canneries. Photo copyright © 2014 Melati Kaye.

Not to mention the “collateral damage” to the environment. Cyanide used to stun reef fish to bring them in live (and therefore exponentially more expensive) also makes coral-dwelling symbiotic algae abandon their shell-building polyp hosts.

No easy task, though, to curb such destructive fishing techniques throughout Indonesia’s eight million square kilometer exclusive economic zone (EEZ), and no one knows this better than Johnny Banjarnahor. He heads up MMAF’s 27 anti-illegal fishing patrol boats, a key component of enforcement that is the culminating phase in Indonesia’s threefold path to fishery sustainability.

“We just don’t have enough boats and the ones we have are too small,” Banjarnahor sighs. “When waves are calm, we patrol the outer waters of the EEZ, on the lookout for illegal foreign trawlers and long liners. And when the weather is rough, we hug closer to the islands, targeting cyaniders and reef-bombers. But we’re no match for the bigger foreign vessels who can still head to sea in rough waters. And domestic fish poachers know our boats, they disappear whenever we get close.”

All the more counter-productive, then, is Indonesia’s self-contradictory bid to equip its domestic fishermen with bigger and farther-ranging vessels to compete with international interlopers, according to Jeremy Prince, the Nature Conservancy’s lead scientist on fish stock assessments. Instead of trying to “increase seafood production through building more boats,” Prince says, Indonesia’s only paradoxical path, at this stage, to higher long-term yields is “if the amount of fishing is reduced and stocks are allowed to recover”—the maritime equivalent of fiscal “austerity” retrenchment. 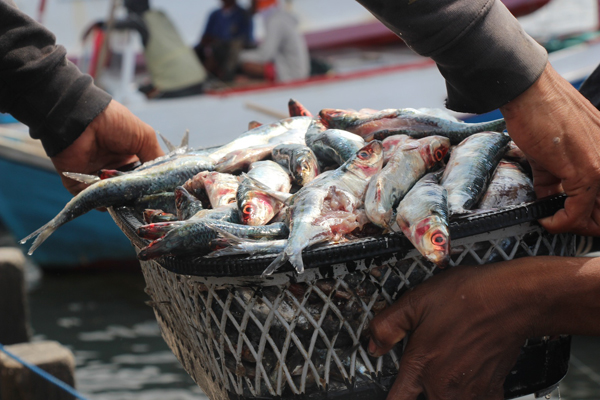 Fish landed using dynamite get unloaded at a harbor in Makassar, South Sulawesi. Local wisdom has it that the telltale signs of dynamited fish are torn stomachs and the red around a fish’s eyes. Fishermen working with bombs can land exponentially more fish in much less time than fishermen working with traditional nets or hook and line. Photo copyright © 2014 Melati Kaye.

And, Prince concedes, much like the widely reviled fiscal austerity, maritime retrenchment would be easier to achieve in flush, rather than lean, times.

“It is much easier to do when fishermen are wealthy and can survive a period without fishing, or of catching less, or where there is a strong welfare system,” he notes. “But no democratic government can ask people to starve so that there will be more fish in the future.”

Nevertheless, this was the main prescription arrived at by Indonesia’s government Center for Research of Fisheries Management and Resource Conservation in its first-ever regional ecosystem-based stock assessment, conducted for the Bali Strait off Muncar last year.

Purwanto, a veteran researcher on the ministry’s survey team, makes no bones about the first imperative of the sardine fishery: “control fishing effort and develop alternative sources of income during lean fish years.”

The report is held at the MMAF’s library in Jakarta, where it will provide ample talking points for the upcoming annual fishery negotiations between the two provinces that flank the sardine-bearing Strait, Java and Bali.

Its findings have not yet filtered down to grass roots officials like Pujo Hartanto, who heads the fisheries division in Banyuwangi, just up the coast from Muncar. But, just by instinct and long experience, he well knows that he must diversify production to prepare for lean times as well as flush.

“Fish production fluctuates, we can’t control that,” he allows. “But if fishermen don’t go to sea, they can at least rear shrimp in aquaculture operations.” He hopes, at the local level, to limit use of floodlights and temporary shelters to lure fish, while retrofitting abandoned local shrimp ponds to lease to fishermen for alternative income. 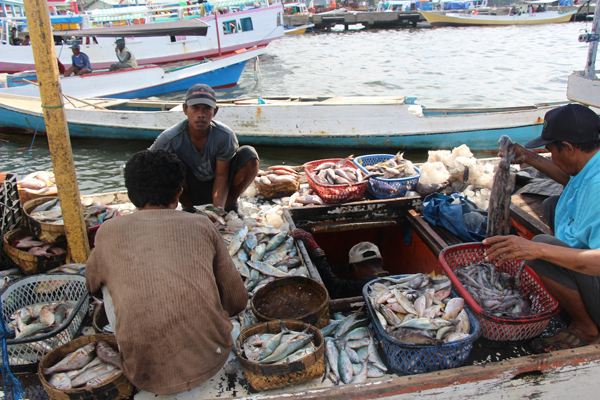 His Balinese counterparts have come up with an even more “holistic” solution in Jembrana, on the other side of the sardine-bearing Strait: they’ve replanted abandoned shrimp ponds with mangroves to jump-start a restoration of species diversity. To the same end, villagers in Pemuteran, up the coast in North Bali, have built (with German and American technical assistance) one of the largest artificial reef systems in the world.

Guarding the reef and the Pemuteran Bay are some of the world’s most eclectic-looking sea patrols. They ride the seas in fiberglass boats, wearing the kind of wrap-around sunglasses that seem to be universal to cops everywhere. But these are combined with the vermillion headbands and checkered sarongs traditional to Balinese pecalang, or temple guardians.

They’re part of an MMAF initiative to supplement the ministry’s own limited patrol capacity with locally recruited irregulars. Similar bands of auxiliary deputies ply the coasts of the Malukus and Lombok, with more planned for elsewhere in the archipelago.

Early indicators suggest that Pemuteran’s seagoing pecalang must be doing something right. Dolphins, who had abandoned the bay after the onset of reef-bombing, have been coming back in numbers over the past five years.