Human-elephant conflicts on the rise, some conservation initiatives planned by government

In 1983, Sri Lanka became embroiled in a 26-year-long civil war in which a rebel militant organization fought to establish an independent state called Tamil Eelam. The war took an enormous human toll; unknown numbers disappeared and millions more were displaced. Economic development stagnated in the rebel-held north and east of the country, while foreign investment shied away from the country.

During the latter half of the war, between 1990 and 2005, Sri Lanka suffered one of the highest rates of deforestation in the world, losing about 35 percent of its old growth forest and almost 18 percent of its total forest cover. However, some parts remain relatively unscathed.

“There has been destruction of much forest and mangrove areas to provide less cover for the antagonistic parties,” Ranil Senanayake, an ecologist and chairman of Rainforest Rescue International in Sri Lanka, said in a previous interview with mongabay.com. “However, many wetlands and other critical ecosystems in the ‘war zone’ have been spared the pillaging that follows the ‘economic development’ agents, who treat all land as a commodity to be exploited for instant economic gain.” 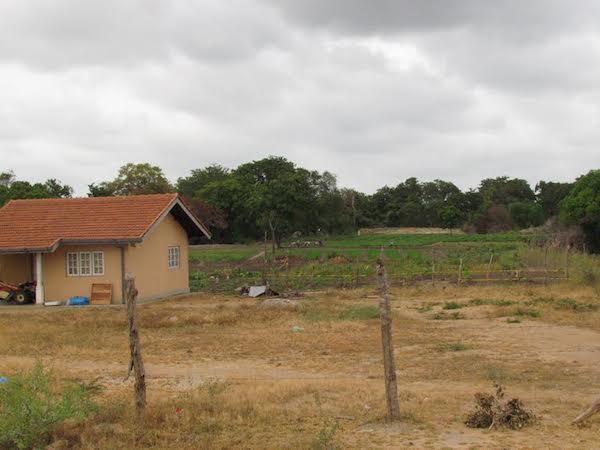 A legal resettlement near a forest in Sri Lanka. Photo by Manori Gunawardena.

The conflict ended in 2009, and while deforestation has slowed somewhat, Sri Lanka is still losing forest cover at a fast clip. Global Forest Watch figures show 49,652 hectares were lost between 2009 and 2012.

Sri Lanka, a small island nation located off the southern tip of India, has one of the highest biodiversity densities in all of Asia, and is regarded as one of the world’s biodiversity hotspots. Together with India’s Western Ghats, the region once had nearly 200,000 square kilometers (77,000 square miles) of important wildlife habitat, of which less than seven percent remains intact today. Because of its isolation and tropical climate, Sri Lanka is home to many unique species and subspecies found nowhere else, such as the purple-faced langur (Trachypithecus vetulus) and the Sri Lankan elephant (Elephas maximus maximus), both of which are listed as Endangered by the IUCN.

People displaced by the war returned to their old homes to find the jungle and wildlife had taken over. When they cleared the land and started to farm, elephants lost secondary forest habitat. In response, the giant herbivores helped themselves to nutrient-rich cultivated crops, leading to escalating conflicts between farmers and elephants.

“The government ought to have had a conservation plan overlapping with the resettlement plan,” wildlife biologist Manori Gunawardena told mongabay.com. “Much of the loss suffered by people and elephants could have been minimized.” Belatedly, the administration is now working on such a plan.

The families of returning refugees had also grown over the past three decades and they needed more land. The government has marked zones for settlement and is creating infrastructure such as roads and railways, leading to further deforestation. For instance, between Vavuniya and Trincomalee, the 48,451-hectare Padaviya Forest Reserve shows telltale signs of deforestation. In 2013, 12,900 hectares – more than a quarter of the reserve – were handed over to the Sri Lanka Mahaveli Authority for human resettlement.

In May 2014, environmentalists accused the government of illegally seizing almost 1,000 hectares from forested areas in the Northern Province for resettlement. 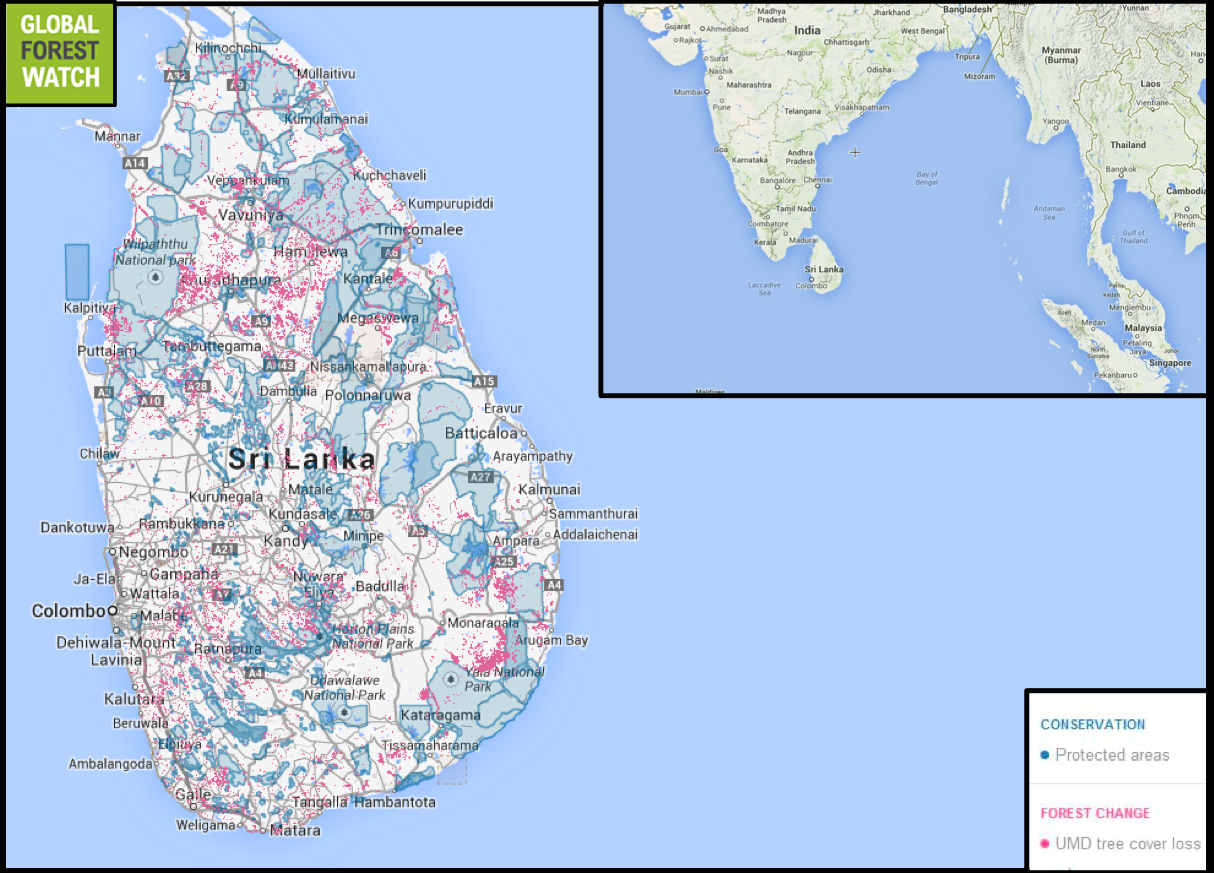 Additionally, individuals themselves have also cleared forests and created homesteads. Some of these are illegal, such as settlements in Wilpattu North Sanctuary.

In one case, the administration opened to the public a dirt road running through Wilpattu National Park in the country’s northwest. When challenged by environmentalists, officials claimed it was the Old Mannar Road that had been in use before the war. However, Environmental Foundation Limited (EFL) filed a case in 2011, providing evidence the Old Mannar Road was prevoiusly defunct and replaced by forest, with a new road created by the Sri Lankan military to facilitate movement of its forces during the war. While the road cannot be surfaced with asphalt until further judicial orders, people continue to use the road.

In the hilly center of the country, expansion of cardamom cultivation threatens the Knuckles Forest Reserve, a UNESCO World Heritage Site. In the south, forest clearance for growing tea endangers the Kanneliya Forest Reserve. 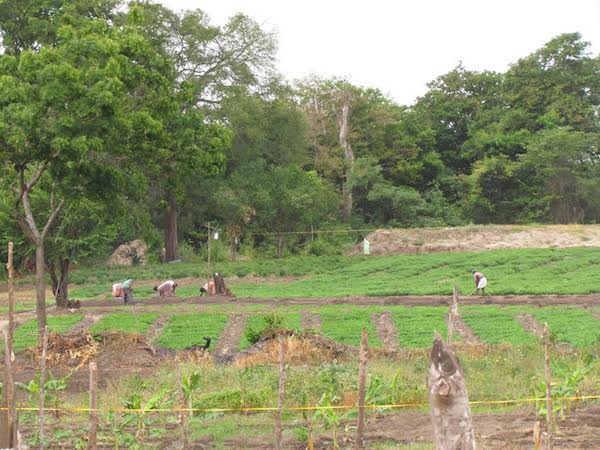 A resettlement farm recently cleared from the surrounding forest. Photo by Manori Gunawardena.

But of more immediate concern are the concessions granted to agricultural companies to grow bananas, soya, and corn near forests. Environmentalists threatened to sue Dole Food Company for clearing more than 200 hectares of Somawathie National Park to grow bananas, its biggest fruit crop. Although the company abandoned this plantation in November 2011, it has other holdings near the forests of Chunnakkadu, Lunugamvehera, and Buttala. The company was also accused of clearing 1,214 hectares of Lunugamvehera National Park.

Dole is just one of Sri Lanka’s many banana growers. According to the Food and Agriculture Organization, more than 50,000 hectares – nearly one percent of Sri Lanak’s land area – were used for banana cultivation in 2000, a number that has likely only increased as the industry expanded from small-scale family farms to large, industrial plantations.

Energy projects are also taking a toll on Sri Lankan forests. Right on the edge of Ruhunu National Park (popularly called Yala), an area inhabited by several herd of elephants, United Dendro Energy Private Limited clear-felled 500 hectares of forest land without getting the necessary approvals. In this freshly cleared area, the company planted rows of Gliricidia (Gliricidia sepium) saplings. Once mature, the trees will be harvested and ground into wood chips to feed a supposedly sustainable energy project. Other dendro-power companies intercrop Gliricidia with rubber trees and rice on agricultural land. 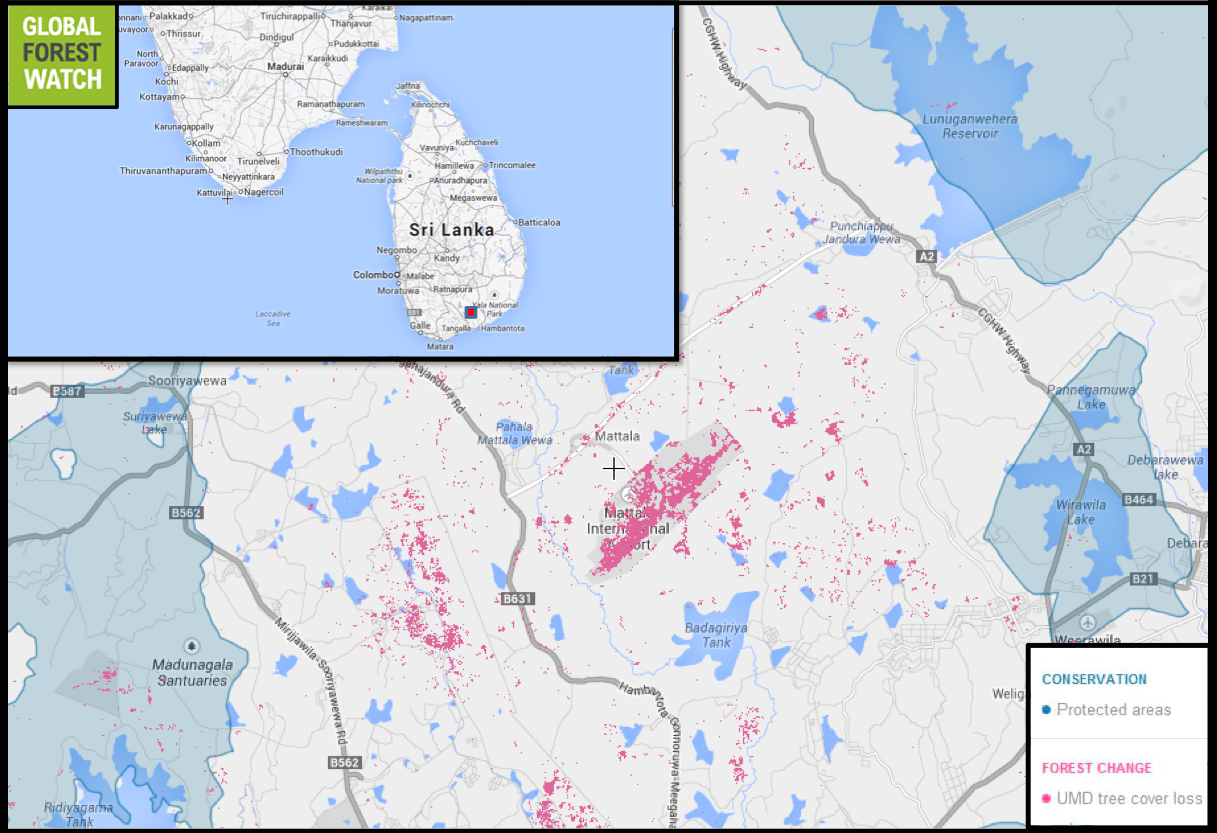 Perhaps the most egregious case of deforestation involves the area near the Mattala International Airport, Hambantota. In 2006, the Department of Wildlife drove 250 elephants out of a 60,000-hectare forest slated for development. The animals were herded into the nearby Lunugamvehera National Park and their exit blocked by electric fences. However, the elephants had difficulty acclimating to the move, and many calves and adults died of starvation as they paced the fence looking for a way out instead of looking for food. Half of their once-forest home was replaced with irrigated banana fields, tsunami rehabilitation settlements, a flashy international conference center, and the new international airport.

In the other half, around 300 to 400 elephants remained. However, growing influxes of people led to mounting conflicts as the elephants became accustomed to human presence and lost their fear. Formerly shy, retiring animals were now quick to lose their temper with any farmers who had the temerity to chase them.

To see how the elephants were moving through their habitat, biologists Prithviraj Fernando and Jennifer Pastorini tracked two bulls and seven cow elephants using satellite transmitters. They found some ranged right up to the walls of the airport, and their data has been used to set up protected areas for the animals.

“We have identified important areas for elephants in the south,” Fernando told mongabay.com. “This informs management and development decisions so detrimental effects on elephants can be minimized. Based on elephant tracking data, the government has recognized approximately 300 hectares as the first Managed Elephant Reserve outside protected areas.”

Additionally, Fernando and Pastorini advise local communities where to erect electric fences to guard settlements and crops from elephants. 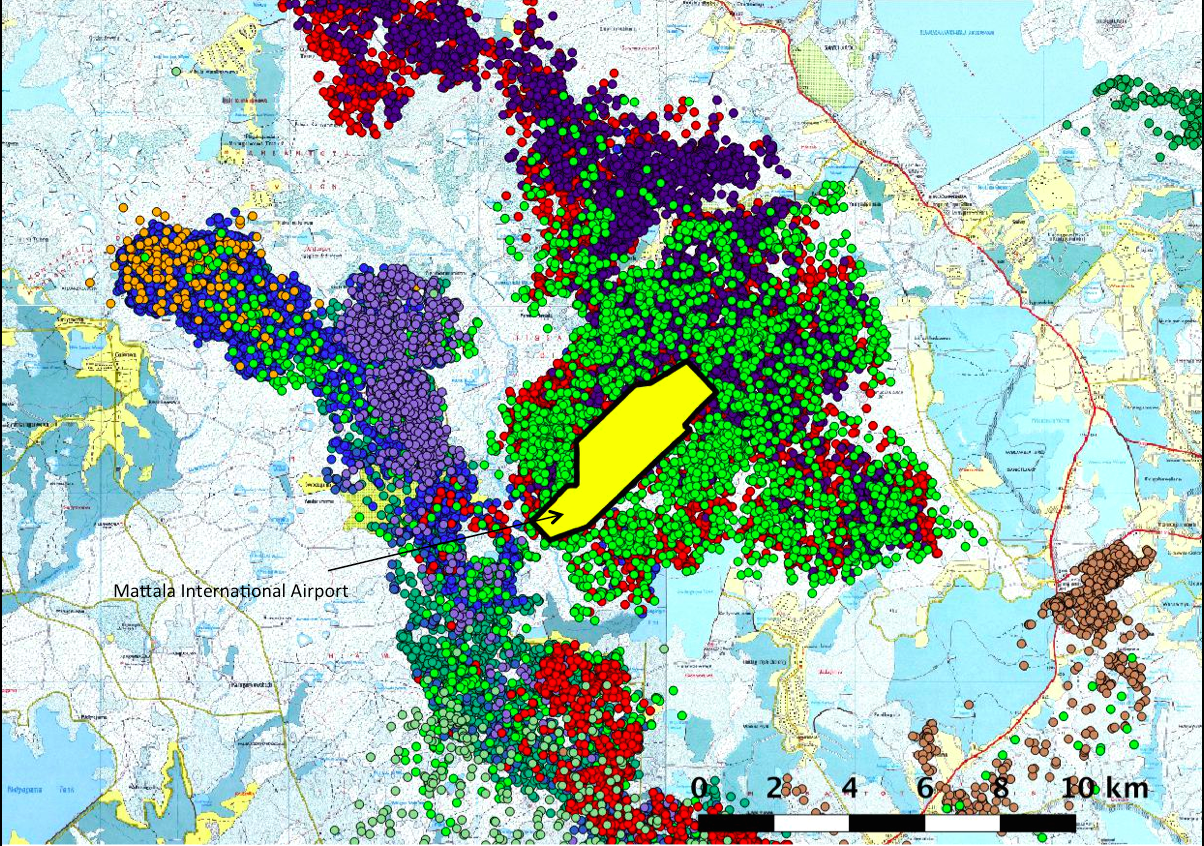 Elephant movement around Hambantota, where the new airport was recently built. Each color represents an individual elephant, with each dot representing a location where it traveled. Courtesy of Jennifer Pastorini/Centre for Conservation and Research. Click to enlarge.

On June 19, 2014, the Minister for Environment and Renewable Energy, Susil Premajayantha, announced plans to increase the country’s forest cover to 35 percent by the year 2020. However, he did not mention whether this will be done though reforestation or plantation expansion.

“At this rate of deforestation, our forest cover will go beyond the critical point when it will affect everything,” Rukshan Jayawardene, a conservationist based in Colombo, told mongabay.com. “We can already see the changes in the wet zone [on the west coast of the country], which has little forest cover left.

“Forests are the common resources of this country and can never be replaced. The current developments will squander them in a few years.” 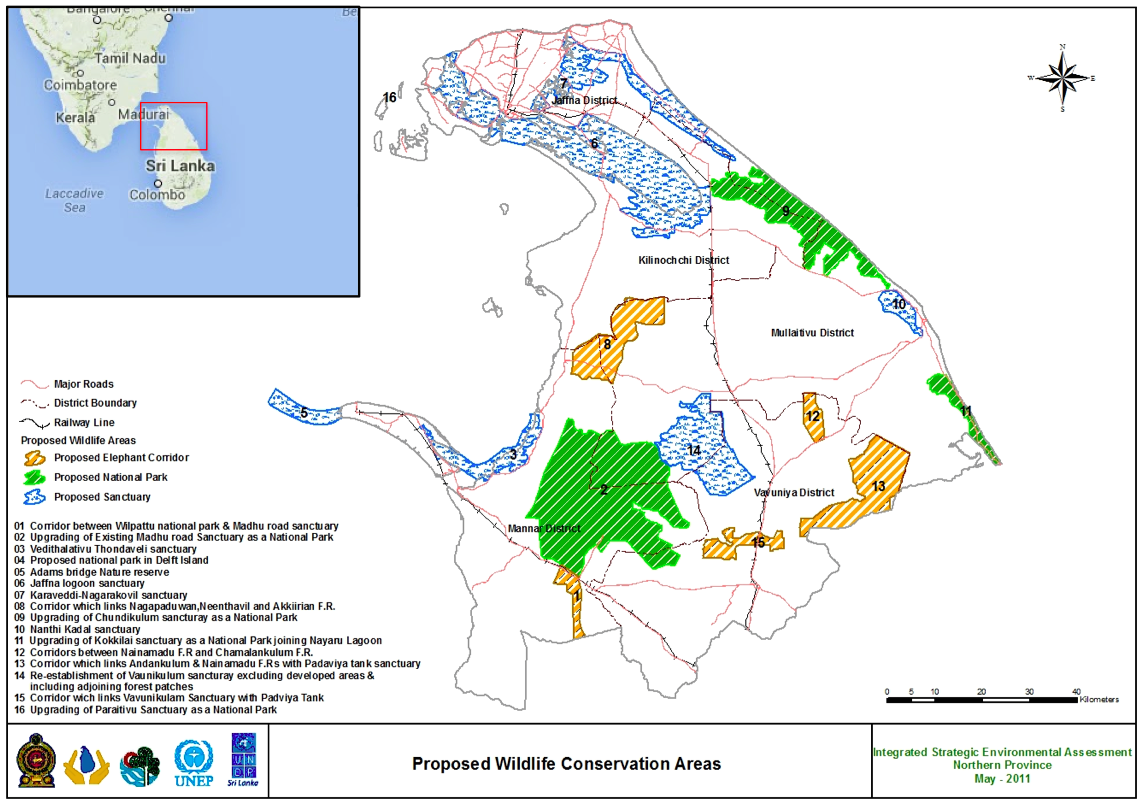 (06/03/2014) Authorities in Singapore have made the largest-ever international seizure of rosewood logs, providing further evidence that industrial-scale smuggling of Madagascar’s rainforest timber continues despite an official ban on the trade. Details of the seizure remain sparse since the investigation is still active, but leaked correspondence between officials in Madagascar indicates that the shipment amounts to 3,000 tons, or more than 29,000 illicit rosewood logs.

(05/21/2014) In Sri Lanka, an underground wildlife racket has been simmering for a while. And a recent incident has brought it to a boil. On the night of May 1st, a gang attempted to kidnap a wild elephant calf out of the Uduwalawe National Park in Sri Lanka. But tipped off by alert villagers, police and wildlife officers foiled the abduction.