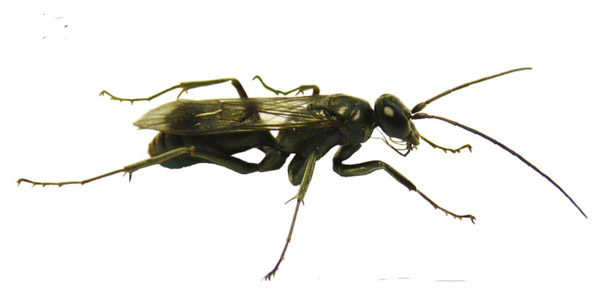 Deuteragenia ossarium) in a paper released today in PLOS ONE. But the reason it fills a nest chamber with dead ants is even more surprising: baby proofing.

“Our discovery demonstrates in an impressive way, what fascinating strategies of offspring-protection have evolved in the animal kingdom,” said lead author Michael Stabb with the University of Freiburg.

Here’s how this works: spider wasps (in the family Pompilidae) build large nests usually constructed out of plant debris, soil, and resin. Each nest contains several cells where the mother wasp lays her eggs. Once the nest is constructed and the eggs are laid, however, she abandons them, leaving them vulnerable to predation and parasites, such as parasitical wasps.

But the bone-house wasp from Southeast China has done something novel, which the authors describe as “a surprising nesting behavior that was previously unknown in the entire animal kingdom.” It builds a final outer layer cell around its brood in which it piles dead ants, sealing them up in a seeming bug-recreation of Poe’s “The Cask of Amontillado.” Yet the wasp doesn’t do this out of vengeance, but to better-safeguard its nest.

Close-up of the dead ant chamber. After killing the ants, the bone-house wasp encloses them in a cell. Photo courtesy of Staab et al.

In other words, even though they are dead, the ants still emit telltale chemical compounds. These compounds could potentially camouflage what’s really inside the nest, for example keeping parasitical wasps away. It could also scare away possible predators, since “most ant species ferociously defend their colonies against intruders,” the scientists explain, who discovered the behavior in the tropical forests of China’s Gutianshan National Nature Reserve.

The most commonly found ant in these murder-cells is the Pachycondyla astuta, which the research call “an aggressive, large-bodied, and common species in the study region that has a powerful sting.”

They hypothesize that the dead-house wasp targets this ant species not just because of its well-known ferocity, but also because of its abundance in the area: potential nest-raiders have likely already had bad encounters with this particular ant species. Moreover, as this is a big ant, the wasp only needs a few individuals to fill its macabre cell.

The scientists found that the construction of the ant bone house is, indeed, an effective strategy. In the nests they inspected the researchers never found the parasitic wasps that commonly invade other nests. Instead, the bone house wasp’s nests were “only attacked by parasitoids which entered the nest prior to the construction of the ant chamber.” 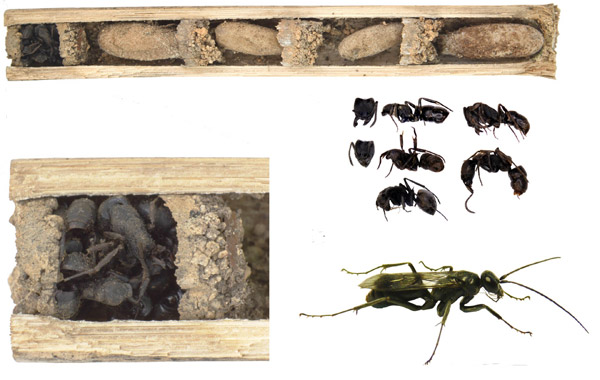 Top: overview of nest showing brood cells closed off by the dead ant cell. Left: close-up of dead ant cell. Middle right: most ants in cells were Pachycondyla astuta, but other ants were used as well, including the bottom ant, which is a Polyrhachis illaudata. Bottom right: Adult female bone-house wasp. Photos courtesy of Staab et al. Click to enlarge.

Close-up of the ant cell adjacent to a brood cell. Photo courtesy of Staab et al. 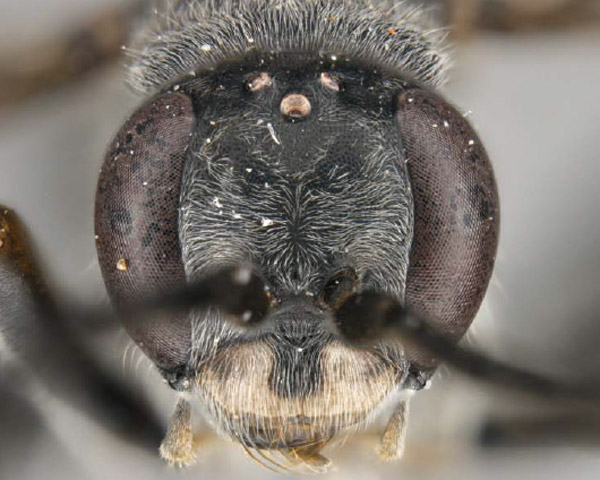 (06/18/2014) Entomologists working in Peru have revealed new and unprecedented layers of diversity amongst wasps and flies. The paper, published in the journal Science, also describes a unique phenomenon in which flies actually fight back and kill predatory parasitic wasps.