Fifty-five crewmen, stripped to their briefs, sing Madurese sea shanties to synchronized gestures as they haul in giant seine nets, hand-over-hand, onto the swaying wooden deck of the M/V Sinar Indah out in the middle of the Bali Strait.

This morning they had offloaded a bumper haul at their homeport of Muncar: seven tons of lemuru sardines (Sardinella lemuru), the local specialty, for which dockside cannery agents offered $3,500.

While securing their purchase, the cannery agents, in turn were overwhelmed by the crewmen’s own neighbors and relatives, each haggling for a share of the catch. Fishwives hectored the brokers while urchins snatched at wicker baskets full of lemuru. In the end, the crewmen had to ring their haul with a human cordon to prevent the sardines from disappearing, untallied, into the melee. 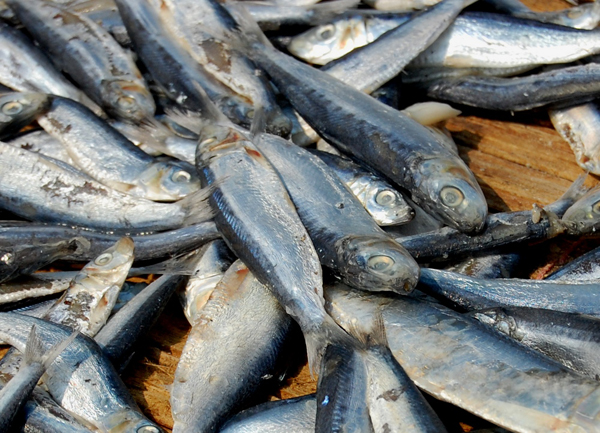 A batch of lemuru. Photo courtesy of Wibowo Djatmiko under a CC BY-SA 3.0 license.

But that was then. Tonight, the chanties falter as the seine nets come up empty—not just on the Sinar Indah, but on most of the other boats in what’s left of the Muncar fleet. The horizon is ablaze with the lights of other vessels, so dazzling and overcrowded that captains can no longer spot silvery sardine schools on the black surface of the ocean just by sight, as they once did. Instead, they must rely on rumors via text-message and radio, which so far have come to naught tonight.

So it goes in the Muncar fishery: feast or famine. The accent, the last few years, falls increasingly on famine. But there’s just enough tantalizing prospect of feasting to keep fishermen scouring the Strait ever more desperately for sardines; an endeavor that only hastens the vicious cycle of species depletion.

Imploding lemuru populations have knock-on effects throughout the ecosystem. The humble sardine forms the basis of an extensive food chain of higher predators including, ultimately, humans. Two out of every three Muncar townsmen either fish for lemuru or work in associated industries. 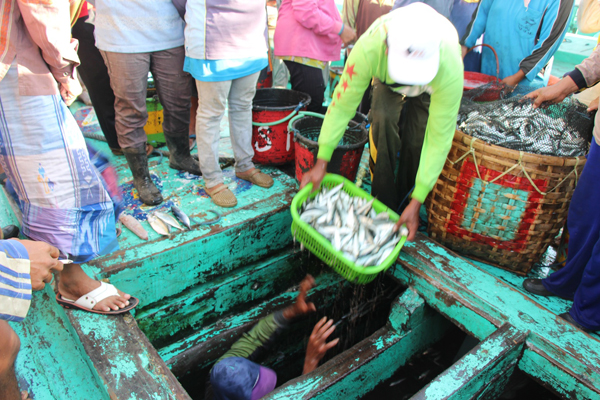 Purse seine crewmen load up wicker baskets with lemuru sardines to be delivered to a cannery as neighborhood fish traders watch, hoping to get a portion of the catch. Photo copyright (2014) Melati Kaye.

“It was normal to make 100 million rupiah ($8,371) in a single evening,” recalls Abidin SP, who heads the regional government’s Fisheries Office in Muncar. “In March, 2010, for six consecutive days, 175 tons of fish were thrown away daily because processors had already hit their full capacity!”

It’s a classic boom/bust cycle: this superabundance of sardines spurred surges of capital investment, both by fishermen and especially by processors. Then the lemuru population collapsed, leaving fishermen and factories scrambling to make any sort of return on their investment.

When Madurese elder Zainullah Baijuri started fishing, back in the late 1970s, a paired set of seiners could contain 40 tons. He wound up buying four of them, before eventually going bankrupt. Now, he says, “a pair of boats can hold 60 tons but the oceans just aren’t as productive.” 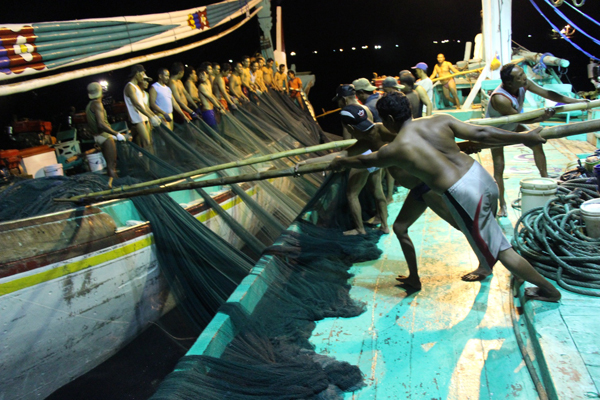 Men use bamboo poles to edge their partner boat away from the seine net. The average crew on a paired set of purse seiners in the Bali
Strait consists of fifty-five men. Photo copyright (2014) Melati Kaye.

Indeed, the entire fleet-wide catch nowadays runs to rather less than 30 tons a day, according to Abidin of the Fishery Office. And that gets divided among the 78 boats that remain active (out of a peak fleet of 190). At going rates, returns average out to less than $200 per vessel, an amount that doesn’t cover even half of a seine boat’s nightly operating cost.

“We must leave the Straits and head to the Indian ocean if we want to land fish,” Baijuri sighs.

But for a cannery or a pellet factory, there’s no option to just up stakes and move. There are existing facilities to be maintained, payrolls to meet, debts to pay, and established foreign markets to service.

“We are international players,” boasts Edy Sukanto, general manager for Pasific Harvest cannery. “Our customer base isn’t in Indonesia. So, to stay in the game, we need steady supplies.”

So, in the second half of 2013, according to Muncar port records, Sukanto imported 118,560 kilos of sardines from Pakistan and the Czech Republic, and 37,000 kilos of mackerel from China – fully half the feedstock for his plant. “Anywhere there is fish, we find it and import it,” he grimly resolves. 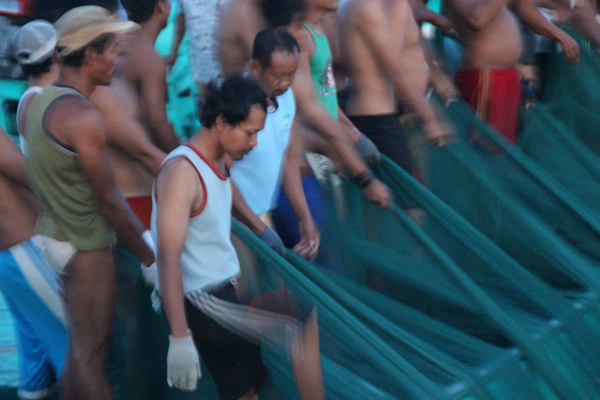 The crew of the Sinar Indah drawing their third empty net of the evening. Photo copyright (2014) Melati Kaye.

Muncar processors have had to source sardines from as far afield as India, Yemen and Peru. Despite these overstretched supply lines, local industrialists are doubling down on fish processing, with nearby Banyuwangi Port even contemplating the addition of an international-scale harbor to expedite exports out of Muncar.

Any player in the lemuru industry has long since learned how to ride out cycles. Sardine populations are intrinsically cyclic. Normally the maximum fish run comes a month and a half after the peak of the June-September southeast monsoon. During the rainy season, easterly winds blow surface water offshore, creating a vacuum into which cold, nutrient-rich water upwells from down below. This spurs phytoplankton blooms, which in turn nurture the zooplankton on which sardines feed.

This occurs once, maybe twice, in a normal year. But every 7-12 years or so—intermittently and unpredictably—an equatorial atmospheric pressure system called the El-Niño Southern Oscillation prolongs this ocean-churning process, causing plankton blooms during any period between November and January, sparking random explosions in the sardine population. 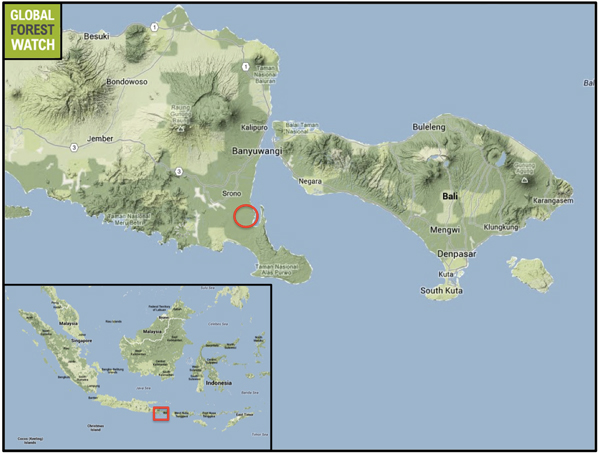 Muncar on the island of Java, Indonesia. Map courtesy of Global Forest Watch. Click to enlarge.

“All small pelagic fish do well in El Niño years,” says Alan Koropitan, lead scientist for the marine policy program at the Surya Research and Education Center outside Jakarta. The danger, though, is that overinvestment to scale up to El Niño boom-time proportions forces factories and fishermen to over-exploit sardine populations in the lean years.

What’s more, Koropitan adds, even when El Niño returns—which will likely happen more erratically and with greater intensity due to global climate change—it could now pack much higher winds and increased storm threats, bad conditions for fishing. So Muncar captains might not get to take full advantage of rebounding lemuru populations after all.

In such a dynamic environment, authorities urgently need to adopt a science-based fisheries management regime that considers the ecosystem holistically. In 2011, Indonesia finalized an Ecosystem-based Approach to Fishery Management System , in line with the country’s commitment to the Coral Triangle Initiative, an international pact including six other Pacific Ocean countries. However, the Fishery Ministry is still ironing out details of what the new system will mean for regional fisheries in the Bali Strait among other places. 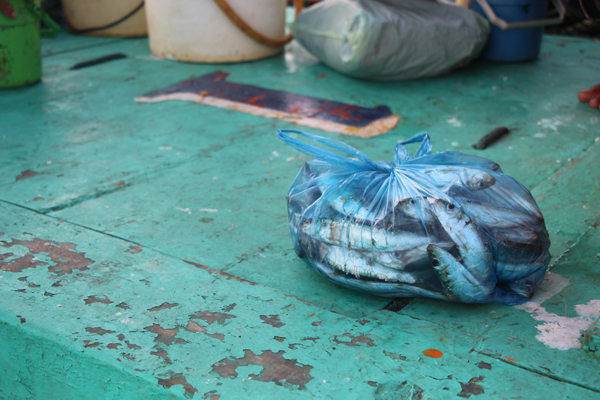 At the end of every fishing trip, each crewman gets a plastic bag worth of fish to take home. On poor fishing nights, boats may not have enough fish to sell to a cannery but every crewman will have fish to take home. Photo copyright (2014) Melati Kaye.

But scientific management requires solid data on the scale and health of the fishery. Remember the dockside melee when the Sinar Indah pulled in with its catch? There’s no telling exactly how much fish was landed in such a chaotic scene. Multiply that over hundreds of vessels and decades of fishing seasons.

Muncar Fishery Office Chief Abidin admits that a lot of sardines never get entered into official tallies. In her 2010 dissertation, University of British Columbia PhD, Eny Buchary tried to put a number to this uncertainty. She estimated that for over 50 years (between 1950-2001) only 50-66 percent of Muncar’s lemuru landings were officially tallied.

Analyzing two decades’ worth of numbers from Muncar, Buchary went on to project five “harvest scenarios under various El Niño effects. She concluded that to keep sardine catches sustainable, the fishing effort would have to be reigned back to half the magnitude the local fleet had in 2001. To achieve this, boats would have to be smaller than they were in 2001, spend fewer days on the water, and using much less light and horsepower.

That would mean a lot of local fishermen would need to change professions. In fact, some are already “out-placing” themselves voluntarily. Captain Mastur Sowi, for instance, is trying to rear lobsters and carp in offshore net pens. But, he sighs, “the quality is not good enough, so we haven’t been able to export.” If things don’t improve, he’ll have to join the many others who now travel away from home to find migrant labor jobs. Many have already pawned their wives’ jewelry to feed the family.

U.S. raises $800 million for oceans, including $7 million from Leonardo DiCaprio

(06/19/2014) A U.S. State Department conference on the oceans raised an impressive $800 million for marine conservation this week. The conference was also notable for the announcement by President Obama of an intent to significantly expand the Pacific Remote Islands Marine National Monument.

(06/18/2014) President Obama announced yesterday he intends to drastically expand the Pacific Remote Islands Marine National Monument making what will likely be the largest marine protected area on the planet. While the full extent of the ocean park has yet to be determined, it could potentially protect over two million square kilometers, an area larger than Mexico.