Attack of the killer vines: lianas taking over forests in Panama

Researchers from the University of Wisconsin-Milwaukee, Stanford University and the University of Pittsburgh, and led by Dr. Stefan A. Schnitzer, studied the impacts of liana-tree competition in central Panamanian treefall gaps. Treefall gaps, known as the “engines of regeneration” in tropical forests, are sites of high growth, carbon accumulation and tree recruitment. However, they are also sites of high liana-tree competition. The researchers studied 17 treefall gaps, regularly cutting all lianas in eight of the gaps while leaving the other nine to grow naturally, thus giving a basis for comparison between the two types of gaps. 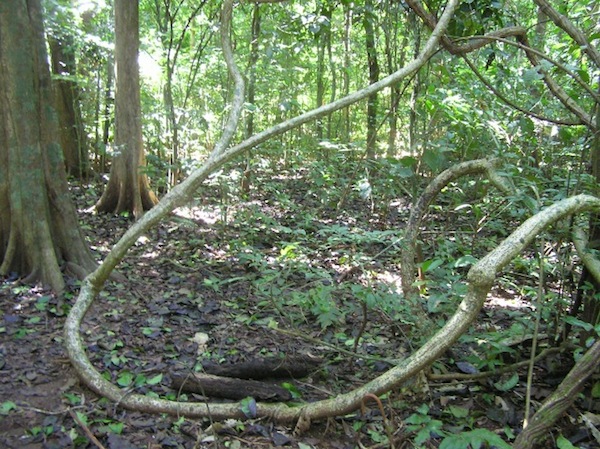 Lianas are woody vines, and are found in both temperate and tropical forests. Photo by Schnitzer et al.

The study, recently published in Ecology, found several detrimental effects of increased liana presence. First, lianas compete with trees for sunlight, soil, water and nutrients, negatively impacting the trees’ reproductive, growth and survival rates. At the end of the study, liana-free treefall gaps were found to have an average tree biomass of nearly three times that of gaps where lianas were allowed to grow naturally.

Second, while lianas do have biomass, their presence in treefall gaps did not make up for the absence of trees. In fact, the lianas in the treefall gaps ultimately displaced 76 percent more tree biomass accumulation compared to the amount that they contributed to woody plant biomass regeneration. This was due to their relatively low wood volume, low wood density, and high rate of mortality and hence, turnover.

“Competition for resources is often considered a zero-sum-game, meaning that, in the terms of carbon, one plant takes the same amount of carbon that its competitor loses,” Schnitzer said. “ Our study showed very clearly that this is not the case.”

Third, because of these two findings, the researchers calculated that in the forest they studied, lianas in treefall gaps displaced 8.9 to 17.8 percent of the forest-level annual biomass accumulation. Considering the enormous role tropical forests play in carbon sequestration, even a small loss in carbon storage capacity translates into a huge amount that stays in the atmosphere. It does not help that the researchers believe their calculated range to be conservative; the actual amount could be much higher. 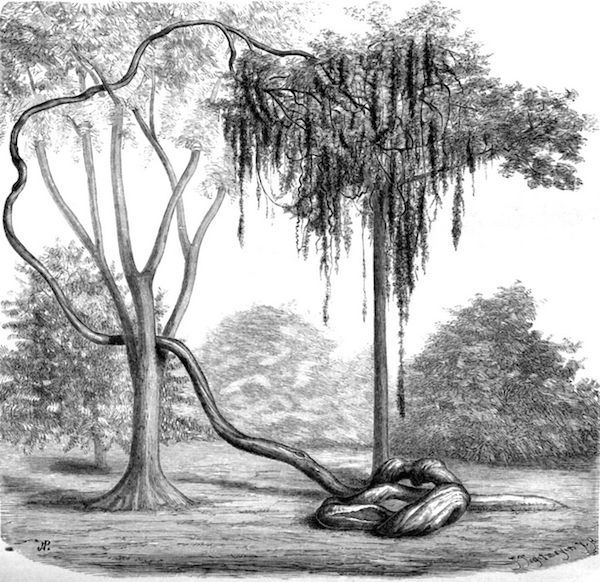 Lianas can offer benefits to the trees they grow on, such as increased structural stability. However, usually these are outweighed by the drawbacks, and many tree species have evolved mechanisms to fight liana colonization.

And yet, there are many unknowns

Perhaps the most important question, however, remains unclear: why are the lianas slowly conquering the forests? According to Schnitzer, the reasons for the liana increase are still speculative. However, climate change seems to be the most likely culprit, with factors such as more severe seasonal droughts coming into play (lianas seem to prefer the dry and hot conditions found in seasonal forests and treefall gaps compared to ever-wet forests).

Furthermore, while the researchers’ data indicates that the rate of liana growth is still increasing compared to trees, there is not sufficient evidence to see how these rates differ between forests. For instance, liana increases have been documented in Latin American forests and in one North American subtropical forest, but there is not enough information on forests in Africa and Asia.

So what can we do? Should we intervene directly in liana growth? Schnitzer cautions against this, as the long-term effects of liana cutting are still unknown. In addition, removing lianas may reduce the numbers of animal pollinators and seed dispersers, eventually harming tree reproduction.

Rather, he says that we need to fully understand the causes of the increase in liana numbers, what he describes as “a key question that will inform management action.”