Unregulated mining ended lives, trashed environment, may be up for renewal in August

Meghalaya, a state in India’s northeast, has thick forests above ground and valuable minerals below. Coal occurs in a narrow belt from the lower western end of the state across to the eastern end. Uncontrolled mining in the area has cleared forests, degraded rivers, and led to many accidents and deaths as few health and safety standards exist for mine workers. A ban effected earlier this year halted all mining in the state, but is set to be reconsidered at a hearing scheduled for August.

The All Dimsa Students’ Union and Dimsa Hasao District Committee of Assam filed a petition before the National Green Tribunal (NGT) on April 2, 2014. They alleged coal mining upriver in Meghalaya had polluted the River Kopili, affecting people downriver in Assam. On April 17, the NGT stopped all coal mining and transport of coal within the state. 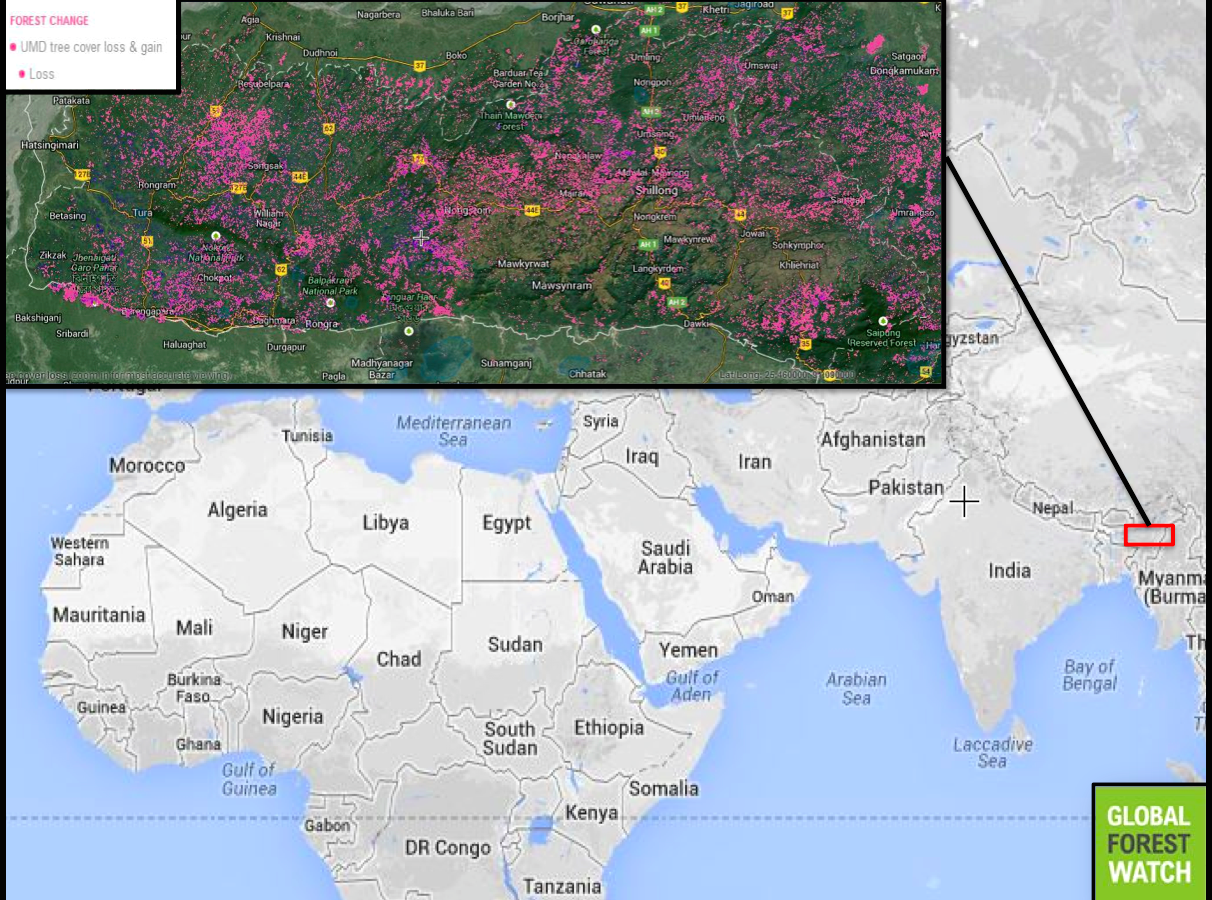 Beginning in the 1970s, coal has been a major state export. Since the turn of the 21st century, the state government has collected taxes on five million to six million tonnes of the substance every year.

However, the actual amount of coal that was exported from the state may be much higher. Rajkamal Goswami, a researcher from Ashoka Trust for Research in Ecology and Environment (ATREE), told mongbay.com, a “lot of discrepancy happens at the weighing bridges thereby undervaluing the royalty/duties. Such malpractices are more blatant in Garo Hills where law enforcement is almost nonexistent. Thus even the official estimates might not really reflect the true ground situation.”

None of Meghalaya’s coal mines are officially registered, so there are no accurate data on production. Nobody even knows how many mines exist, as landowners who discover coal on their property often started mining without any paperwork. Because of these unregulated underground excavations, entire hills are riddled with deep mine shafts, land has caved in, and roads have cracked. Monsoon rains carry away mine waste to rivers, turning water acidic. Every year since 2007, River Lukha turns a surreal toxic teal due to sludge runoff washed from the mines. 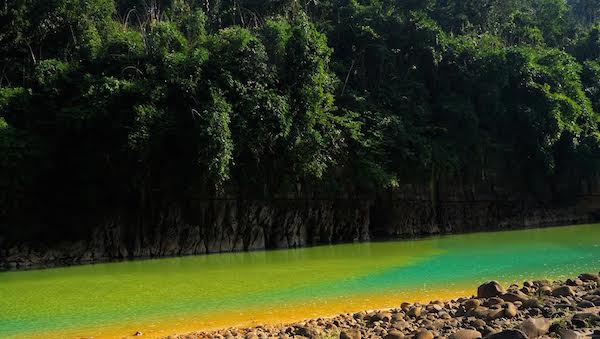 A post-monsoon river with runoff from mine waste. Photo by Rajkamal Goswami.

Coal is indiscriminately mined and dumped on forested lands, leading to widespread degradation. To truck coal out, roads are cut through forests. Global Forest Watch figures show 60,914 hectares of forest loss between 2001 and 2012, representing almost 3 percent of the state’s geographic area.

The burning of coal leads to air pollution. Due in part to coal, a 2014 report issued by the World Health Organization found that India has overtaken China for the world’s worst air quality. Another report issued in 2013 by the Conservation Action Trust and Greenpeace-India found that burning coal in India likely led to 80,000-115,000 deaths annually, including 10,000 children under five.

In addition to causing local air pollution problems and degrading land, coal mining has global repercussions; coal is the most carbon-intensive fuel source, and is playing a big role in global warming.

Immigrants brought from Nepal, Bangladesh, and other parts of India toil to extract coal under dangerous conditions. Because the mines are unregulated, they’re not subject to laws ensuring worker safety. This consequential lack of health and safety standards has led to accidents and deaths. In one of many instances, four miners were buried alive when the walls of a box mine in the Garo Hills collapsed earlier this year.

The mines were also exempt from child labor restrictions. The organization, Human Rights Now, discovered 70,000 children were working in the hazardous mines of Jaintia Hills in eastern Meghalaya alone. 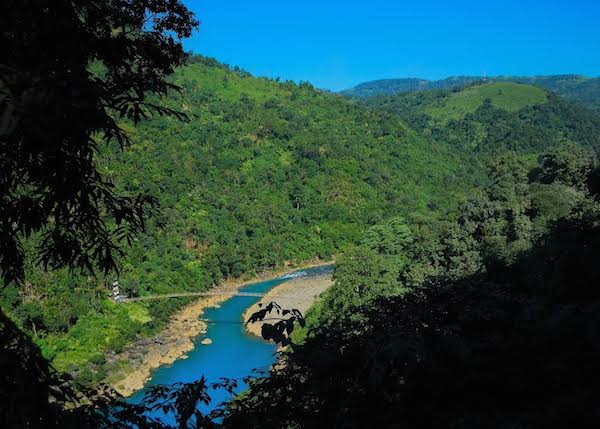 The Lukha River in Meghalaya. Photo by Rajkamal Goswami.

The tribal inhabitants of the state enjoy administrative autonomy to a degree unknown in the rest of India. Under the provisions of the Sixth Schedule, three District Councils have the power to legislate laws to safeguard customary tribal practices, basically allowing their absolute control of mineral extraction. While absolute control is still held on a federal level, nothing appears to have been done before the ban to regulate the industry in Meghalaya.

“The tribal areas of Meghalaya are governed by the Sixth Schedule of the Constitution of India, which recognizes the primacy of the District Councils to protect the cultural identity and tradition of the tribals,” Shilpa Chohan, a partner at Indian Environment Law Offices and a Supreme Court advocate who is familiar with the coal mining industry in Meghalaya, told mongabay.com.

“The schedule further stipulates that the President of India can exempt or modify any Parliamentary enactment (Central Law) for the state. But until an exemption is issued, all parliamentary enactments, including mining, environment and forest, are applicable to the state like the rest of the country.”

The state’s Mines and Minerals Policy of 2012, acknowledges coal mining requires a mineral concession from the state, as well as clearances from the State Pollution Control Board and the State Environment and Forest Department. However, these clearances were often bypassed as red tape.

“Meghalaya has become like America’s Wild West, with the state completely derelicting its regulatory function,” Arpan Sharma of the non-profit Samrakshan told mongabay.com.

Tribal chiefs oppose any move to regulate mining, for fear their traditional powers may be eroded. They also argue that coal mining is a customary practice.

However, coal has no traditional use in homes in the state, nor is it used to smelt iron to make implements. The British began coal mining in the 19th century, and it is primarily exported to Assam and Bangladesh. Recently, cement factories have been established in Meghalaya that use coal to generate electricity. 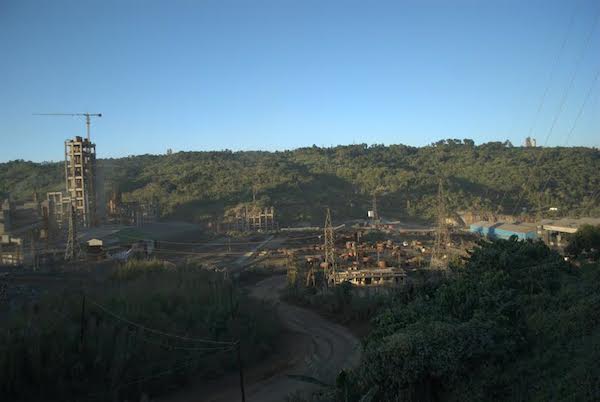 The building of a cement factory, which will be powered by coal-generated electricity. Photo by Rajkamal Goswami.

While the ban has shut down mining in the state and improved local environmental conditions, processing is still active. In Meghalaya alone, approximately 30 coke plants that convert mined coal to fuel, five thermal units, and seven cement factories have been starved of coal as a result of the ban. However, they simply source coal from elsewhere, such as from the neighboring state of Nagaland.

Early in June, the NGT formed a committee to decide how to transport coal that had already been mined. The next hearing of the coal mining ban is scheduled for August 1 in Shillong, the state’s capital.

Conservationists expect stiff opposition to the ban from local mine operators at the hearing. But citizen groups from neighboring states and activists will also have a say, demanding improved health and safety measures for miners, cleaner air and water for the local populace, and better forest management.

“Firstly, there has to be a moratorium on all illegal coal mining – and today all mining is illegal [in Meghalaya],” Sharma said. “Secondly, [if the ban is lifted,] the state should identify Ecologically Sensitive Zones where no mining can be allowed. Areas falling outside these zones can be mined, provided they follow all the laws and best practices.”

(05/12/2014) Breathing in urban India is hard: of the world’s top twenty cities with the worst air, 13 of them are found in India, according to a new analysis by the World Health Organization (WHO). Despite the attention recently given to Chinese cities for atrocious air pollution, many of India’s cities are actually worse when comparing annual averages of fine airborne particulates.

(04/29/2014) For many years, Ramesh Agrawal has worked to spread awareness of the environmental repercussions of India’s coal industry to local residents, empowering them with information and speaking out on their behalf. In 2012, his tireless efforts shut down development of a major coal mine, which would have been the largest in the state of Chhattisgarh.