Inches away from being passed, a new regulation on peatlands management in Indonesia is drawing protests from civil societies that claim it may increase land tenure conflicts among local people.

The Government Regulation on Peatland Ecosystem Protection and Management, initially drafted by the Ministry of Forestry in 2013, is getting mixed acceptance from civil society. On one hand, the regulation would offer more protection to the country’s vast peatland areas. However, on the other, some NGOs have slammed the draft as a potential source of new conflicts for local people.

“The draft only categorizes peatlands into two functions, as protection areas and as cultivation areas,” Zenzi Suhedi, forest and plantation campaigner of Indonesian Forum for the Environment, also known as Walhi, recently told Mongabay-Indonesia. “It does not touch on the ownership issue at all which brings out the question, what will happen to local people who are already in the areas?” 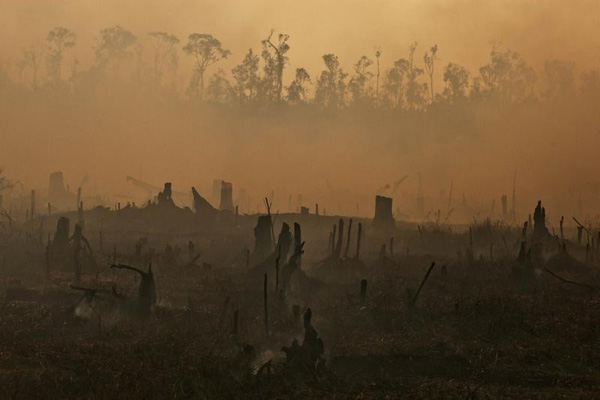 Nearly 20 percent (40 million hectares) of Indonesia is classified as wetlands, slightly more than half of which are peat swamps. These areas are found mostly on the islands of Borneo (Kalimantan), Sumatra, and Papua. Papua alone contains one-third of Indonesia’s peat. Peat swamps are made up organic matter that doesn’t fully decompose, instead accumulating and holding in moisture. They can take thousands of years to form, and can be very deep – the deepest ever found was 20 meters (65 feet). They are important reservoirs of biodiversity, and a recent study found 45 percent of mammal species and 33 percent of bird species that inhabit peat swamps are considered to be at risk of extinction by the IUCN.

Of all types of rainforest in Indonesia, with the possible exception of mangroves, peat swamps have the highest deforestation rates. Of the 49 percent of Indonesia’s remaining forested peatland, less than 10 percent is considered pristine. Most has been selectively logged, partially drained, or otherwise degraded.

Suhedi criticized the peatland management plan put forth in the draft regulation as it relies heavily on physical inventory, pertains only to the country’s larger peatlands, and does not consider social aspects.

“It will bring confusion to local people when they are suddenly being informed that their homes are protected areas,” he said, adding that only legal institutions or groups would be allowed to manage peatlands.

The new regulation was also criticized by Anggalia Putri, Climate Change and Community Rights Program Coordinator of HuMa. Putri underlined the fact that community rights are not considered in the draft, saying that they are simply regarded as “local wisdom.”

“[The government] can easily claim that they have included this local wisdom, but without field monitoring and mapping out which communities are already living in the areas, it would instead bring more conflicts for local people,” she said.

According to Suhedi, the regulation contains a law enforcement loophole as it allows local governments to evaluate damage caused by mismanagement of peatlands.

“It’ll open negotiations for local governments and companies to [argue damage extent and establish fines out of court] instead of settling them in court,” he said. “This is a step back from the progressive 2009 Environmental Protection and Management Law which ensures legal steps for environmental destruction.”

Suhedi said there is one advantage to this draft regulation – it expands criminal offenses to include peat fires, which had previously been classed under administration sanction.

“But, this is still a high price to pay,” he cautioned. “We do believe that peatlands need to be regulated for their protection, but it would not be enough through this regulation. It might even get worse.”

“We have regulations on emissions cuts and are also now planning government regulation on peatlands,” said Yuwono.

He added that peatlands are very influential when it comes to Indonesia’s contribution to global warming since their destruction releases 10 to 12 times the amount of carbon dioxide as compared to destruction of other forest types in the same areas.

Currently, the draft regulation is awaiting the signature of the Minister of Forestry, whereupon it will go back to the president for his final sign-off.

(07/20/2014) Long considered an unproductive hindrance to growth and development, peat swamp forests in Southeast Asia have been systematically cleared, drained and burned away to make room plantations and construction. Now, as alternating cycles of fires and flood create larger development problems, while greenhouse gas emissions skyrocket, it is time to take a closer look at peat, and understand why clearing it is a very bad idea.

(06/26/2014) Just over a year ago, the Indonesian government officially approved the country’s first REDD+ forest carbon conservation project: Rimba Raya, which aims to protect more than 64,000 hectares of peat forest in Central Kalimantan. The approval came after years of delays from the Ministry of Forestry and a substantial reduction in the project’s concession area. But InfiniteEarth, the firm behind the project, pressed on. Now a year later, Rimba Raya’s is not only still in business, but is scaling up its operations.

(06/17/2014) An Indonesian logging company says that clearing of peat forest on an island off Sumatra is ‘in line with its Sustainable Forest Management Policy’ because the area wasn’t found to be of high conservation value. In a letter responding to concerns raised by environmental groups, Asia Pacific Resources International Holdings Limited (APRIL) said its forest policy applies to all its concessions, including the Pulau Padang concession where Greenpeace documented deep peat clearance last month.

‘Borne by the rest of the world’: deforestation has global impact, reduces food security

(06/13/2014) Research indicates that areas with more forest cover tend to have superior food resilience compared to areas with less. In addition, the loss of forest cover to deforestation has long-term impacts not only locally, but also globally. These topics were discussed by international experts during the 2020 Conference on Building Resilience for Food and Nutrition Security, held last month in Addis Ababa, Ethiopia.