The UNESCO World Heritage Committee today unanimously rejected a controversial proposal by the Australian government to strip 74,000 hectares of temperate rainforest from a World Heritage Site in Tasmania. In an embarrassing setback for the Australia government, it took the committee less than ten minutes to unanimously reject the proposal, according to the Guardian.

The 74,000 hectares in question were a part of a so-called “peace deal” between environmentalists and loggers in Tasmania, which added 170,000 hectares to an existing World Heritage site. The government contended that much of the forest was degraded, yet experts disagreed. In fact, the IUCN found that 85 percent of the 74,000 hectares was natural forest and nearly half of the whole was old-growth forest. The IUCN recommended that the committee reject the proposal.

“Today is vindication for every Australian, and people around the world, who love Tasmania’s forests and want to see them protected,” said World Heritage expert Alec Marr in response to the decision. “The World Heritage Committee has today upheld the integrity of the Convention and Australia needs to respect its obligations to the Convention.”

The former leader of Australia Green party, Bob Brown, blasted the current government for its attempt to shrink the World Heritage Site.

“[Prime Minister] Tony Abbott lied about the forests being degraded. That lie has been rejected at international level. It is a diplomatic fiasco for the Prime Minister and Australia. However, it is a win for global diplomatic propriety,” Brown said in a statement adding, “This is the lowest point in the history of Australian environmental diplomacy. Abbott’s failed mission has sullied the nation’s great history of upholding the World Heritage Convention.”

Environmentalists and conservationists have decried a number of proposals put forward by the Abbott government, including a controversial shark cull, an attempt to kill the country’s carbon tax, a moratorium on new protected areas, and dumping coal dredge in the Great Barrier Reef. 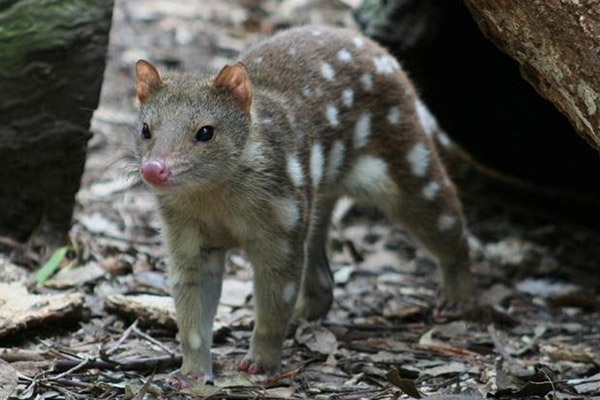 Tiger quolls (Dasyurus maculatus) are found in the region’s forests. These are the longest carnivorous marsupials on the planet and are listed as Near Threatened by the IUCN Red List. Photo by: Joshua Cunningham/Creative Commons 2.0.

(06/13/2014) Australia is seeing a rise in groups that purport to champion environmental causes but are actually actively undermining them as front organizations for industrial interests, argues an op-ed published in The Ecologist.

(05/27/2014) The International Union for Conservation of Nature (IUCN) has roundly criticized Australia’s proposal to remove 74,000 hectares of temperate rainforest from the World Heritage Committee. In a report to the global organization, the IUCN argues that the removal of these forests would “impact negatively” on the site’s overall value.