Around 11 AM on Thursday, 27 February 2014, Angoulou Enika was lying hidden in the tall grass on the side of a large water hole in the Sahel region of Niger. He was staying as quiet as he could while aiming his custom-made rifle at an Egyptian vulture which had landed nearby to drink from the water. He took a breath, held it and fired. The large bird fell to its side.

Content with his haul, he jumped up, grabbed the animal and started skinning it. He piled the feathers to one side, carefully separated the eyes and the brain, cut and laid out the meat to dry and cleared the skull and skeleton. He found a strange cell-phone like devise attached to its back but put it aside also planning to sell it. The only piece he threw away were the intestines. Every body part of the vulture is valuable where he comes from—Nigeria.

Rich people in Niger’s southern neighbor are willing to pay a lot of money for vulture body parts. They believe that keeping a vulture’s head or feather in their home would bring them an even better fortune. Some even eat their eyes and brains to obtain clairvoyant powers to, for instance, predict who to bet on for winning the World Cup.

This month’s hunt has been really successful for Enika. He managed to killed eight vultures and 42 crows (another bird considered a valuable fetish). He was ready to head back to his village in Nigeria—84 miles south.

Little did he know that the bird he killed that Thursday was Paschalis—an Egyptian vulture tracked via satellites by scientists in the LIFE+ “The Return of the Neophron” project—a $3.4 million conservation initiative funded by the European Union. Unaware, he had removed the still functioning transmitter from the back of the bird and carried it along all the way to his home country, triggering a two-month long international investigation into his tracks. 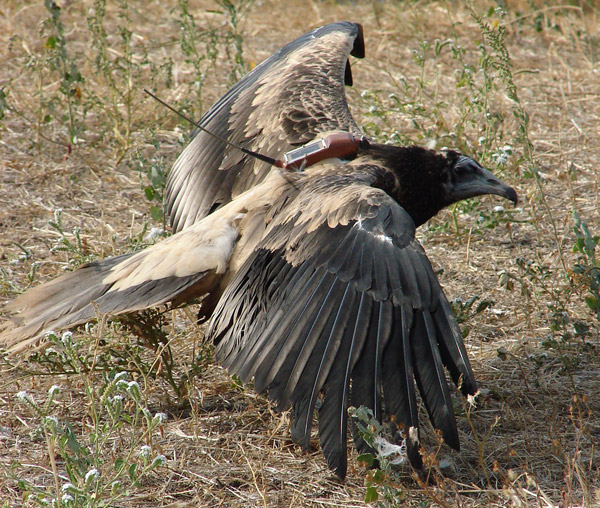 Hundreds of miles north from Niger, in Bulgaria’s capital Sofia, ornithologist Volen Akumarev from the Bulgarian Society for the Protection of Birds first noticed that Paschalis’ signal had stopped moving. Akumarev and his colleagues from LIFE+ are used to losing birds and quickly recognize what the stationary signal meant. Only one of ten newly-hatched Egyptian vultures (Neophron percnopterus) survives to adulthood.

The rare vulture species has an interesting lifestyle: they hatch in Europe and as juveniles make their way to Africa where they spend the winter season. True cosmopolitans, they fly back to their summer homes in Europe and spend the rest of their lives migrating hundreds of miles between the two continents.

“They are not just ours,” often says Stoyan Nikolov, manager of the LIFE+ conservation project. “They spend half of their lives in Europe, half in Africa. They are black and white after all.”

Paschalis was only seven months old when he was killed. He had hatched in Dadia National Park in Greece and the ornithologists from WWF Greece had fitted him with a leg ring and a satellite transmitter on the back.

Paschalis was only one out of eight young Egyptian vultures tagged with satellite transmitters that tried to cross the Mediterranean along its migration to Africa. The other seven either drowned (because they didn’t have an adult to show them the right route to fly over the sea), or fell prey to predators. The sole survivor of the long trip, he had settled by a water hole near Damou Kadi village in Niger—the same waterhole where the hunter’s bullet finally reached him.

The LIFE+ project team (by BSPB, HOS, WWF Greece and RSPB) observed on their computer screen as the signal from the detached satellite transmitter travelled from the hunter’s hide out, to a house in the nearby village, and finally down the main road crossing the border into Nigeria. They contacted colleagues from two local NGOs: Sahara Conservation Fund in Niger and A. P. Leventis Ornithological Research Institute in Nigeria.

In March, just a few weeks after the incident, the NGOs dispatched their staff to the last-received satellite coordinates in the two African countries. The ensuing investigation revealed an extensive commercial network for trading wild animal body parts worth thousands of dollars. 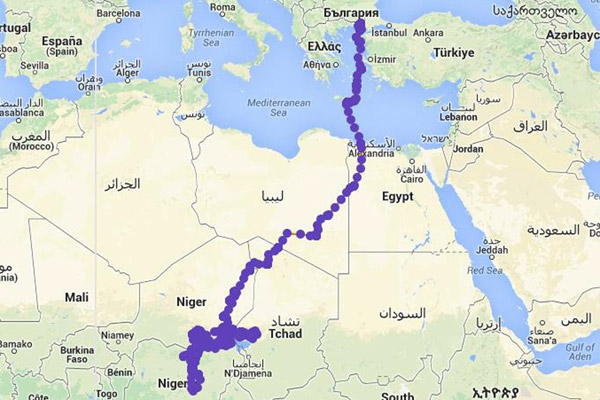 Sahara Conservation Fund investigators found out that Enika hunts near Damou Kadi village in Niger every three months. Very few vultures remain in his home country Nigeria where locals have pursued them to near-extinction.

“This hunter is small fish,” said Nikolov. “We should aim to get to the heart of the problem, reveal the entire illegal network.”

Egyptian vultures are listed as Endangered in the IUCN Red Book. National laws and international conventions such as CITES signed by both Niger and Nigeria protect them on paper. These are rarely enforced, though, as prices of body parts have tripled in past few years.

“There is a spike in the market demand for vulture brains during sports competitions,” said Nikolov. The conservation scientist explains that years ago only shamans performed traditional ceremonies for seeing into the future on special occasions. “Now it’s just fashionable to do it for self-enriching reasons.”

Many Nigerians also consume the vultures’ meat and even their excrement hoping that these will cure disease. 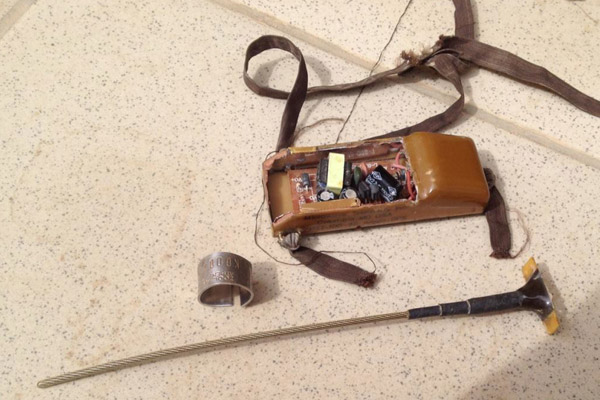 The broken transmitter of Paschalis. Photo by: APLORI/Lifeneophron.eu.

“Some African cultures believe that vultures have magical powers because they are in touch with death daily yet get away unharmed,” added Nikolov.

There is no scientific prof, however, that vulture body parts have any healing effect whatsoever.

The Bulgarian scientists believe the most valuable body parts are exported to European countries as expensive fetishes. The African diaspora in England, Netherlands, and other places still maintains traditional beliefs and may provide a market for the fetishized body parts.

“Importantly, though, these people can afford to pay a lot higher price than local shamans,” said Nikolov.

“I feel like a hound dog,” noted Nikolov. “I want to make sure Paschalis didn’t die in vain so we are trying to use this case to learn as much as we can about the threat and how to counter it.” 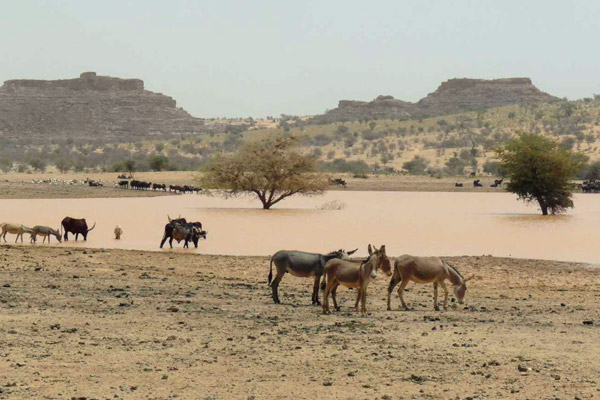 The wetland where cattle and vultures concentrate during the dry season in Sahel zone. Photo by: SCF/Lifeneophron.eu.

“Forbidding vicious practices is not sufficient,” said Nikolov. “Such problems can only be resolved by offering alternatives.” Consequently, law enforcement is the last priority on the conservationist’s mind.

One idea LIFE+ scientists want to pursue is organizing informational campaigns in Sahel countries targeting nomads and farmers. Many of them do not realize what an important role vultures play in the local ecosystems. Vultures eat dead livestock and in that way help prevent the spread of disease. Without them, the herders could lose their animals.

“The elders know that,” said Nikolov from his interviews with locals in Chad and Djibouti. “The young generation has lost this wisdom though.”

Another idea is to organize healthcare campaigns offering vaccinations and basic treatment to families. Access to modern medicine would hopefully deter people from the practice of eating vulture body parts recommended by dubious healers.

Conservationists do not have sufficient funds, though, to work remotely in Africa.

“Our project spends millions to protect 75 vulture couples on the Balkan peninsula,” said Nikolov. “Yet there are thousands of vultures in Africa. It would be a lot more cost-effective to invest conservation funds directly there.”

The Bulgarian scientist emphasizes that only a very small part of the money goes into the birds themselves (for tracking devises, supplementary food etc).

“Practically all the money is invested in people offering environmental education and conservation jobs to locals along the way of the vultures’ migration,” he said.

The name of the hunter has been changed while the investigation is still ongoing. 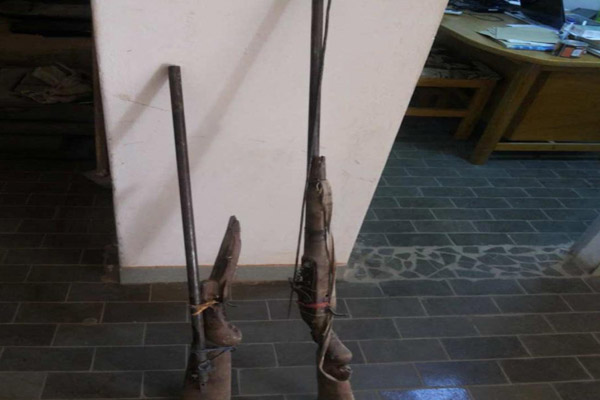 Hand made fire guns of the vulture hunter. Photo by: SCF/Lifeneophron.eu. 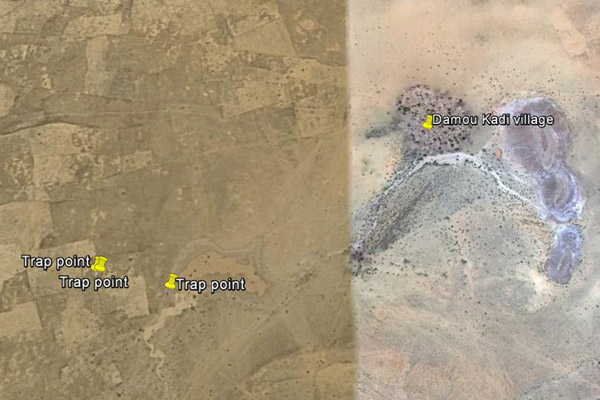 The site where Paschalis was killed and the village where transmitter was kept for several days. Photo by: Lifeneophron.eu.

(06/17/2014) When a massive road project connected the ports of Brazil to the shipping docks of Peru in 2011, conservationists predicted widespread impacts on wildlife. Roads are a well-documented source of habitat fragmentation, interfering with access to available habitat for many terrestrial and tree-dwelling species. However, it wasn’t clear whether or not birds are able to fly over these barriers.

(05/01/2014) In a three week hunting safari between January 11th and 31st of this year, Saudi Arabian Prince Fahd bin Sultan bin Abdulaziz Al Saud and his party allegedly shot down 2,100 Asian Houbara bustards (Chlamydotis macqueenii) in Balochistan, Pakistan. Scientists aren’t certain how many Houbara bustards survive today, but their best estimate is around 100,000 and declining.