In 1890 Lamberto Loria collected 45 specimens—all female—of a small bat from the wilds of Papua New Guinea. Nearly 25 years later, in 1914, the species was finally described and named by British zoologist Oldfield Thomas, who dubbed it the New Guinea big-eared bat (Pharotis imogene) after its massive ears. But no one ever saw the bat again. Some conservationists believed it had gone extinct—possibly even wiped out during that first collection—while others maintained hope. The species was categorized as Critically Endangered by the IUCN Red List, and listed as number 32 in the world’s top 100 most imperiled and genetically distinct mammals compiled by the Zoological Society of London’s EDGE program.

Fast forward to 2012. During an expedition to Papua New Guinea, PhD students Catherine Hughes and Julie Broken-Brow with the University of Queensland were busy collecting bats in a harp trap, a specially-designed stringed trap for catching bats without injuring them. After several weeks they documented nine species, and one female bat they couldn’t identify.

“But we were certain we’d stumbled upon a great discovery,” Broken-Brow told mongabay.com of the mystery female.

The pair ethically euthanized the female and placed her in the Papua New Guinea National Museum and Art Gallery. Two years later, another researcher, Harry Parnaby, requested the specimen and after careful examination discovered that the New Guinea big-eared bat was back, detailing the discovery in the Records of the Australian Museum. 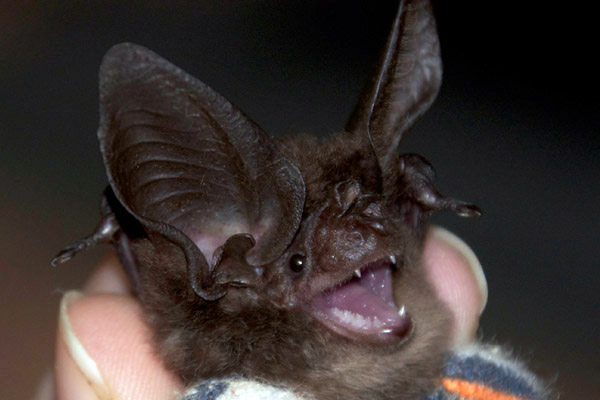 “We were absolutely thrilled,” noted Broken-Brow.

Jack Stewart with EDGE said the group was also “very excited” about the discovery.

“It is extremely rare that a species that has not been recorded for such a long period of time is rediscovered and we are glad that a species so high on the EDGE mammals list is no longer considered extinct,” he told mongaaby.com, adding that the group was “very keen to assist with future conservation and research not only of the rediscovered species but across Papua New Guinea, as it contains a number of top priority EDGE species.”

Now that the researchers have confirmed that the species is not extinct, Broken-Brow says its imperative for researchers to begin learning more about this species that avoided attention for over a century.

“Nothing is known of it’s ecology or biology, only what we can assume based on it’s morphology,” she said. “We need to determine its actual distribution, habitat preferences, foraging preferences, roosting requirements and breeding cycle. Only once we know these things can we undertake active conservation. The main issue with this goal is funding, Papua New Guinea is extremely remote and costly to survey.”

Although the species is listed as Critically Endangered—and to date no male has ever been recorded—Broken Brow said it’s possible the species is more common than expected.

“The reason the species has not been found in 120 years is because no one has harp trapped in the region—ever! Harp traps are not commonly used in the tropics because they are difficult to transport and many species can simply be caught in lightweight mist nets. However, I think our survey has proven the value of lugging around a big heavy harp trap in the rainforest.”

She added that scientists should now conduct more systematic trapping for bat in different habitats in the region. Interestingly, the specimen was captured in the district of Abau on the coast, 120 kilometers east from where Loria collected his bats in 1890, meaning its range may not be too small. It was also collected from recently logged rainforest as the scientists were conducting studies on how bats fare in sustainably-managed logging concessions, in this case the Cloudy Bay Forestry Management Area. 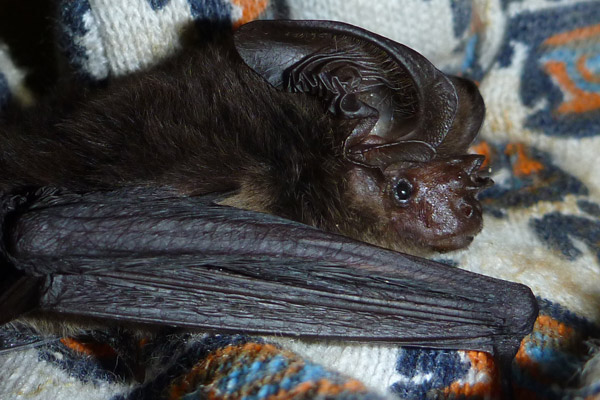 “Because we have scientifically proved it’s presence, logging and development companies must now accept that there is a chance the species is present and allow for this. This will hopefully result in the protection of further habitat, not only for [the New Guinea big-eared bat], but also other species,” Broken Brow said.

However, the rediscovery also opens up a sensitive topic in conservation circles today. Recently, a study in Science argued that over-zealous collecting of endangered species could be putting them at further risk of extinction. The study, headed by Ben Minteer, argued that non-lethal technologies—such as DNA analysis, digital photography, and audio recording—should be employed instead of euthanizing animals for museum collections.

For her part, however, Broken-Brow says she doesn’t regret the decision to euthanize the female bat, saying that given the circumstances it wasn’t “unnecessary vouchering.”

“We took long and careful thought before we decided to voucher the specimen…There is certainly arguments for and against, and I fully acknowledge this. However in this case, I stick by our decision. As some readers may know, DNA is not the ‘magic solution’ for every situation. Because the previous specimens were so old (and preserved in formaldehyde) it is almost certain that DNA analysis would be extremely difficult, if not impossible,” she said, adding that photos wouldn’t have been enough either as distinguishing microbats usually depends on measuring the skulls.

“There was also a strong chance we may have discovered a completely new species to science, this also was a contributing factor to our decision,” she noted.

Finally, having a body on file means no one can dispute that the bat has been rediscovered, which Broken-Brow says could lead to more urgent conservation measures. 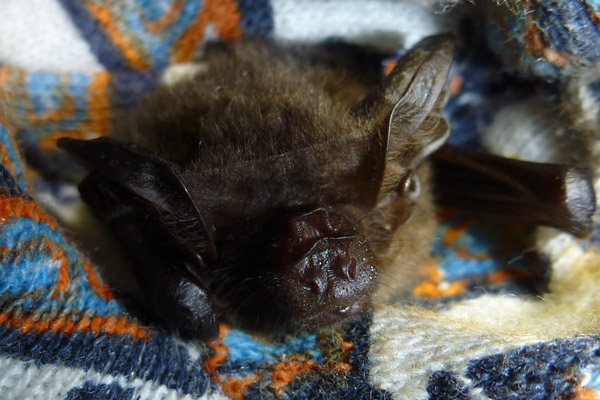 Another view of the female New Guinea big-eared bat. Photo by: Julie Broken-Brow.

“If this was one of the last individuals left in the species—I hope that its death will actually serve to save other individuals of the species, and other bat species in general. No longer can loggers [and] developers etc. pretend the bat is extinct and destroy [or] alter its habitat. They now MUST recognizes its possible presence and protect habitat for it.”

Stewart with EDGE agreed that collecting a body in this case was vital.

“It is always unfortunate that an individual of such a rare and endangered species must be euthanized however sometimes it is a necessary measure,” Stewart with EDGE added. “As the species has only been recorded once over a century ago it was important to categorically confirm that this was a New Guinea big-eared bat.”

The paper in Science, published this April, has created significant debate, including a major response paper published just over a month later. This paper, signed by 126 scientists from 66 institutions, argued for the importance of the millions of specimens maintained in scientific collections. For instance, many specimens are used hundreds of years later for data and research never-imagined by the original collectors.

One thing that can’t be disputed, however: the re-discovery of the New Guinea big-eared bat has garnered a lot of attention having been covered by dozens of media outlets.

“We are surprised at the amount of interest this has generated and it’s been great for bat awareness and conservation around the world,” said Broken-Brow, adding that “insectivorous microbats (such as Pharotis imogene) are extremely important species in any ecosystem. Microbats are found on every continent on earth, except Antarctica, and play a vital role as insect population regulators. This keeps the balance between invertebrates and plants, and also serves human interest as they control agricultural pests too.”