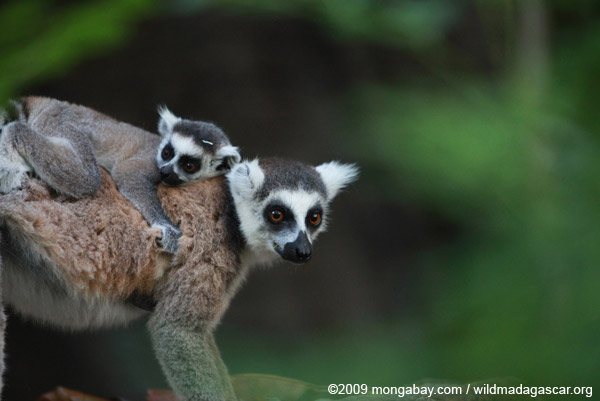 The famous ring-tailed lemur (Lemur catta) is now listed as Endangered, one of 90 lemur species currently considered threatened with extinction. Photo by: Rhett A. Butler.

Experts have added 817 species to the threatened categories of the IUCN Red List in the latest update. Those added include 51 mammals—mostly lemurs—and over 400 plants. The new update finds that over 90 percent of lemurs and 79 percent of temperate slipper orchids are threatened with extinction.

“What was most surprising about this assessment was the degree of threat to these orchids,” said Hassan Rankou, the IUCN Species Survival Commission’s (SSC) Authority for the Orchid Specialist Group, “Slipper orchids are popular in the multimillion-dollar horticultural industry. Although the industry is sustained by cultivated stock, conservation of wild species is vital for its future.”

Temperate slipper orchids are found in Europe, North America and temperate Asia, but have become hugely imperiled due to habitat loss and over-collecting.

As for lemurs, the new update found that a stunning 94 percent of this primate group—only found on the island of Madagascar—is at risk of extinction, making them one of the most imperiled groups on the planet. In fact, experts moved 36 species of lemur from a Data Deficient ranking (meaning there is not enough information to make a determination) to one of three threatened categories, i.e. Vulnerable, Endangered, and Critically Endangered. Another eight were moved from lower categories to threatened.

“Past successes demonstrate that collaboration between local communities, non-governmental organizations and researchers can protect imperiled primate species. We urgently invite all actors to join our efforts to ensure the continued existence of lemurs,” said Christoph Schwitzer, Vice-Chair for Madagascar of the IUCN SSC Primate Specialist Group.

Lemurs are most imperiled by deforestation and habitat loss, but also face poaching for bushmeat.

This year also marks the 50th anniversary of the IUCN Red List; however, to date, the list has only managed to evaluate around four percent of the world’s total described species. While some taxonomic groups—like mammals and birds—have seen all their members assessed, many have been neglected. For example, less than half of the world reptiles have been evaluated, while only 8 percent of molluscs and 0.5 percent of insects have been assessed. Perhaps, most shockingly, only one mushroom has been evaluated out of the world’s 31,000-plus described species.

“Very little positive action happens without the Red List as a starting point…but so much more needs to be done” noted IUCN Director General Julia Marton-Lefèvre. “We need to continue to expand our knowledge about the world’s species to better understand the challenges we face, set global conservation priorities and mobilize concrete action to halt the biodiversity crisis.”