Total profit from environmental crime may exceed $200 billion per year

Deforestation has many harmful consequences, from loss of wildlife habitat to degradation of water and air quality, and many more. Now, a new report adds another repercussion to the list: the funding of terrorist groups and other crime networks. 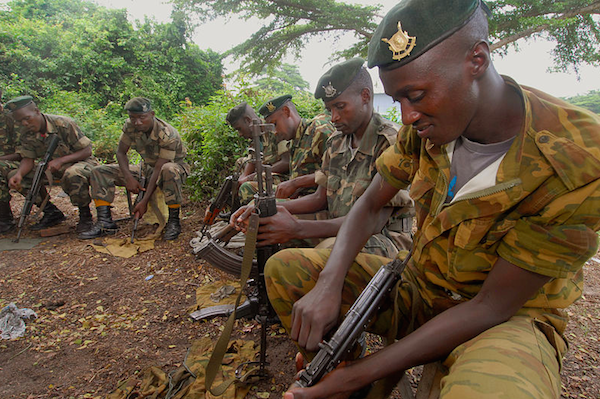 Burundi peacekeepers prepare for next rotation to Somalia to fight Al-Shabaab insurgents. Photo by US Army Africa.

The report pegged the total worth of environmental crime, including logging, fishing, mining, wildlife trafficking, and waste, at $70 billion to $213 billion per year. Illegal logging alone was worth between $30 billion to $100 billion annually, while wildlife trafficking was worth $7 billion to $23 billion. As if the situation weren’t nightmarish already, organized criminals, militias, and terrorist groups reaped a significant amount of this ill-gotten lucre, especially in some African countries.

In many parts of the world, wood smugglers are not prosecuted as stringently as wildlife poachers. Unlike dealing in illegal drugs, piracy, or wildlife crime, the probability of getting caught and convicted is low, while profits are high. Even worse, many conflict zones are in the vicinity of forests where governments have little reach. Illegal timber trade is a made-to-order industry for criminal and armed gangs.

In parts of Africa, trees are often burnt to make charcoal. Some armed gangs plunder trees even from protected areas in countries like Tanzania, Uganda, and the Democratic Republic of Congo (DRC). Others levy tax – up to 30 percent of the sale value of the burnt wood – at road blocks. In the DRC, militias make $14 million to $50 million per year from taxes. Trade in charcoal is suspected to fund the operations of the terrorist organization, Boko Haram, made infamous most recently for the abduction of more than 200 girls from a school in the eastern part of Nigeria.

In Somalia, the Al-Shabaab militant group makes an estimated $8 million to $18 million per year from just one road block in Badhadhe District, Lower Juba Region. Such road tax on charcoal shipments appears to be the militant group’s primary income.

A report issued by the United Nations Security Council Committee’s Monitoring Group on Somalia and Eritrea notes charcoal produced from the aromatic wood of Acacia trees (Acacia bussei) is a sought-after luxury item for grilling meat in Dubai, Oman, Saudi, and Yemen. Kismayo, a key seaport in Al-Shabaab territory in southern Somalia, is especially renowned for high-quality charcoal.

According to Global Forest Watch, Somalia lost 7,554 hectares of forest between 2001 and 2012, equaling approximately 0.02 percent of its total land area. While that may not seem like much loss, Somalia’s total illicit charcoal export is estimated to be worth $360 million to $384 million per year. 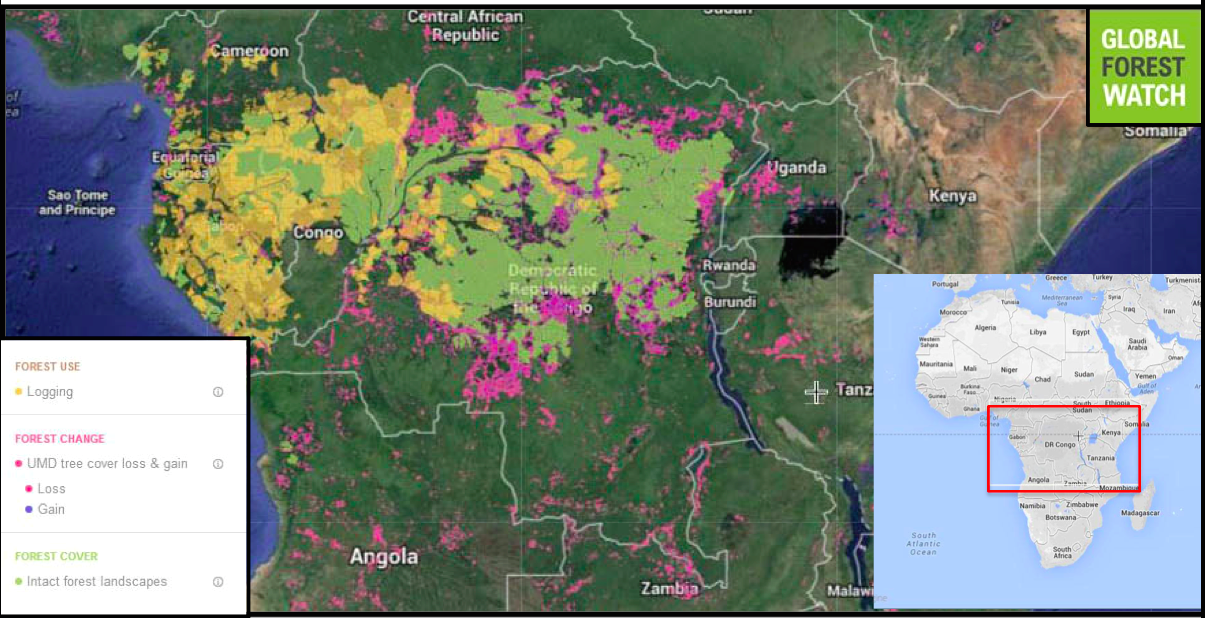 After Brazil, the DRC has the world’s largest intact swath of tropical forest. But logging has reduced it by six million hectares over the past 13 years. Map courtesy of Global Forest Watch. Click to enlarge.

While trade in charcoal appears to be restricted to within the neighborhoods of its countries of origin, wood pulp has a global market.
Of all the suspected illegal tropical wood entering the U.S. and E.U., 62 to 86 percent arrives in the form of paper, pulp, and wood chips. Once wood is processed into pulp, only laboratory analysis of fibers can reveal the species of tree and country of origin. To further confound authorities, illegally obtained pulp is often mixed with legally produced plantation wood.

The report recalls that Charles Taylor, the former President of Liberia and a convicted war criminal, funded his country’s civil war with timber. Similarly, logging fueled the Khmer Rouge rule of terror in Cambodia.

Forest crime benefits cohorts of armed militias and terrorist groups. If they suffer military defeat, their economic clout enables them to regroup and resurface. They buy arms and get advanced training, enabling them to undertake larger and more complicated military operations. They take control of roads, rivers, ports, and border crossings, where taxes offer a significant source of income. Conflicts near forested areas can destroy natural resources and cause severe human rights abuses.

While little is happening to change the situation in Africa, Latin America offers a brighter picture. Since monitoring began in 1988, Brazil enjoyed the sharpest decline in deforestation in the world in 2012, a reduction of 64 to 78 percent. 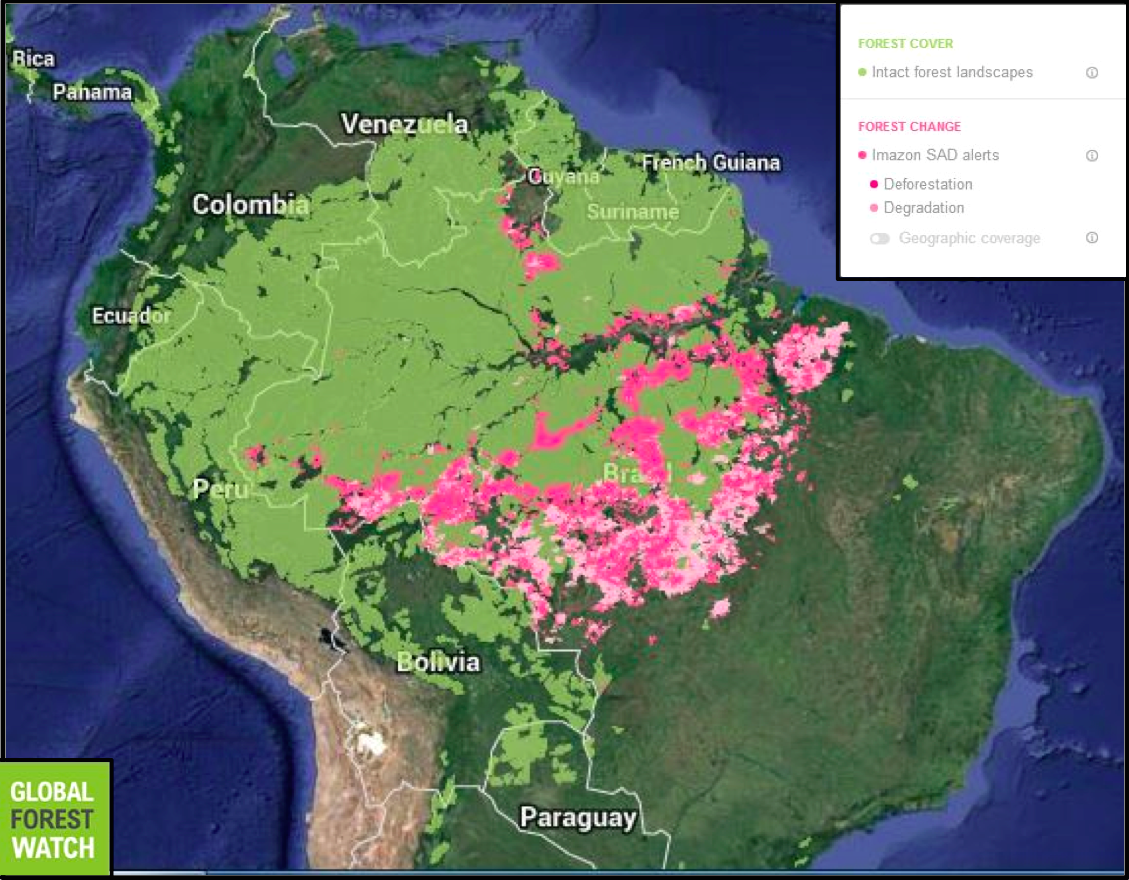 According to a study published in Science earlier this month, Brazil lost less than 500,000 hectares in 2012. To put that in perspective, the country’s average annual rate of deforestation hovered around two million hectares between 1996 and 2005, representing the loss of an area of forest the size of Israel or the U.S. state of Massachusetts every year. Global Forest Watch figures show a loss of about 36,028,000 hectares between 2001 and 2013, representing more than four percent of Brazil’s total land area.

This dramatic improvement was the result of coordinated enforcement, using satellite imagery and targeted police operations, as well as large-scale engagement with communities in REDD+ and other initiatives. However, in 2013, Brazil’s rate of forest loss rose slightly to 600,000 hectares.
In 2013, a coordinated effort by INTERPOL resulted in the seizure of 292,000 cubic meters (11 million cubic feet) of wood and wood products in Costa Rica and Venezuela. The volume of wood seized was equivalent to 19,500 truckloads and worth about $40 million.

Indonesia, the country currently experiencing the largest percentage of forest loss in the world, is also combating environmental crime. Trained by the United Nations Office of Drugs and Crime, investigators prosecuted a suspected timber smuggler from West Papua on money laundering charges; $127 million passed through his account. In May 2014, he was sentenced to eight years in prison.

The “Environmental Crime Crisis” concludes by stating the urgent need for much more to be done. It recommends that countries take certain measures to reduce their rates of crime-induced deforestation in the long-term, including acknowledging the threats forest crimes pose to sustainable development, promoting consumer awareness to reduce demand, and strengthening certification programs and legislation. In the short-term, the report underlines the importance of sharply increasing the scale and coordination of operations to tackle illegal logging. 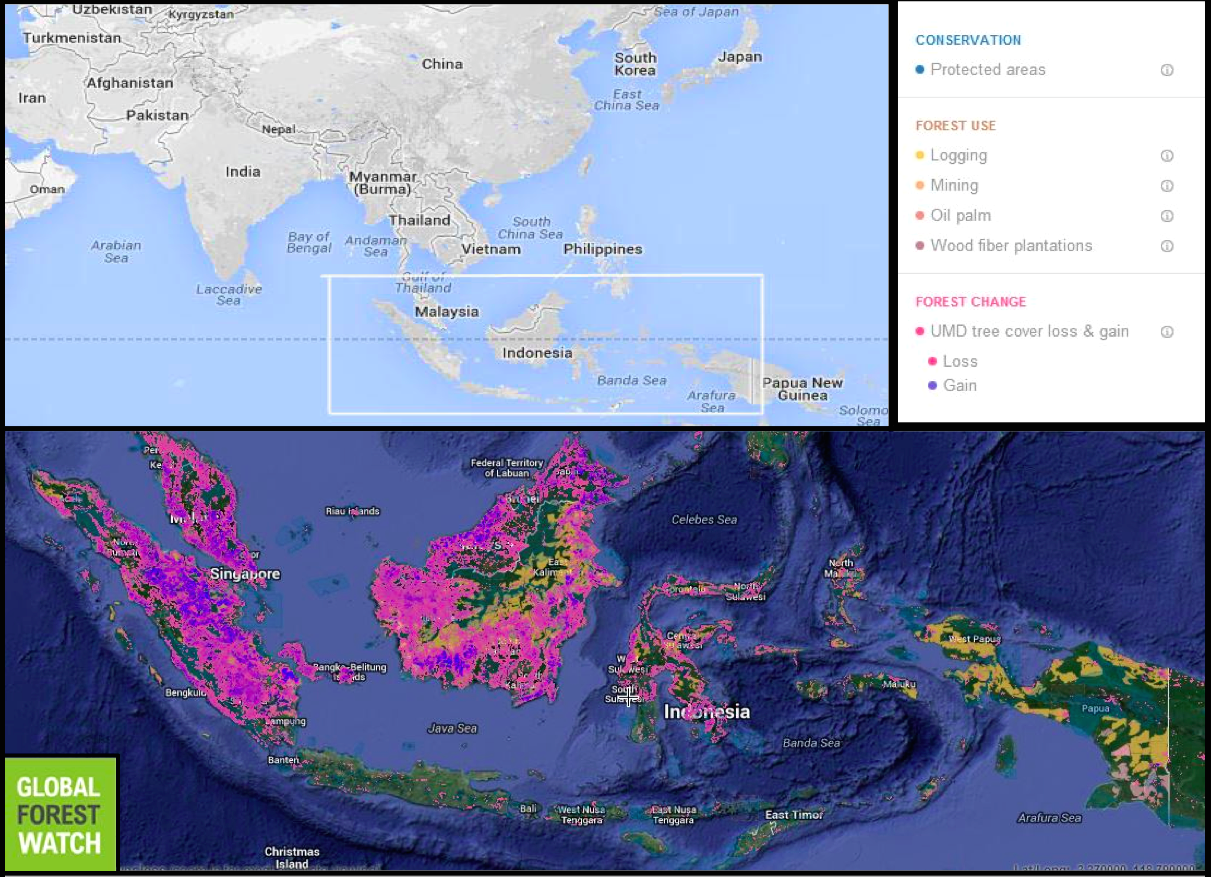 Indonesia has lost six million acres of forest since 2001, a level of deforestation that is equivalent to nearly 10 percent of its total land area. Map courtesy of Global Forest Watch. Click to enlarge.