Is the banteng making a comeback? Researchers find new population in Cambodia

Researchers have discovered a new population of banteng (Bos javanicus), a species of wild cattle, in northwestern Cambodia. The discovery was announced June 4, 2014 by Fauna and Flora International (FFI), and efforts are underway to implement conservation initiatives to protect the area and its newfound banteng, which are listed as Endangered by the IUCN.

Camera trap images of six banteng were taken in a 9,500-hectare community forest in Siem Reap Province, where the species was previously believed to have gone extinct. The area is not currently officially protected. 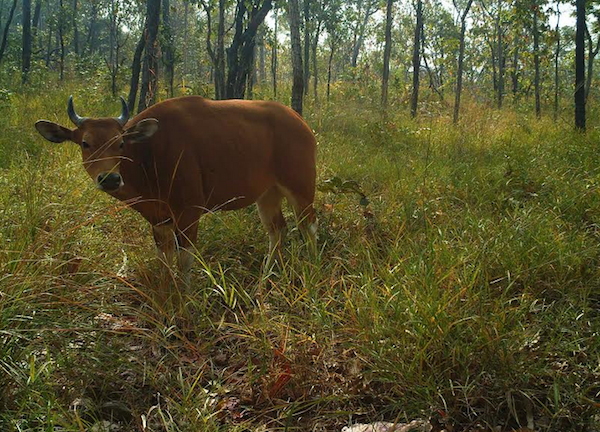 Banteng are similar in size to modern domestic cattle. There are an estimated 5,000-8,000 individuals worldwide, but populations are generally small and fragmented. Photo by Caleb Jones, ISAC.

According to WWF, Cambodia is believed to hold the largest population of banteng in the world – between 2,000 and 5,000 individuals. Many of these animals are found in the eastern plains of Mondulkiri Province and the deciduous forests of northern Preah Vihear Province. According to the IUCN Red List, the species has declined 95 percent since the 1960s. A significant number of animals are believed to live in forests outside Protected Areas, as illustrated by the population near Siem Reap Province.

Unlike domestic cattle that feed on open pastures, the banteng’s survival is linked to forests.

“Historically, banteng would have inhabited dry deciduous forest and mixed/semi-evergreen forest,” Caleb Jones, of the Angkor Centre for Conservation of Biodiversity (ACCB), who set up the camera traps in Siem Reap, told mongabay.com. “They particularly like mosaic habitats with areas of open grassland and herbaceous bamboo alongside denser habitat where they can move when threatened or to sleep. On site, we found most evidence for banteng (dung, hoof prints, sleeping sites, and camera records) in areas of mixed forest and in evergreen forest. There was little evidence for banteng [at lower] elevations, closer to areas of human disturbance.”

The dramatic decline in banteng numbers is exacerbated by the accelerating loss of forests. According to data from Global Forest Watch, Cambodia lost approximately 1,259,480 hectares of tree cover between 2000 and 2012, representing nearly seven percent of its total land area. Siem Reap Province has been hit even harder, with 128,640 hectares, or more than 10 percent, of its area deforested over the past 13 years. 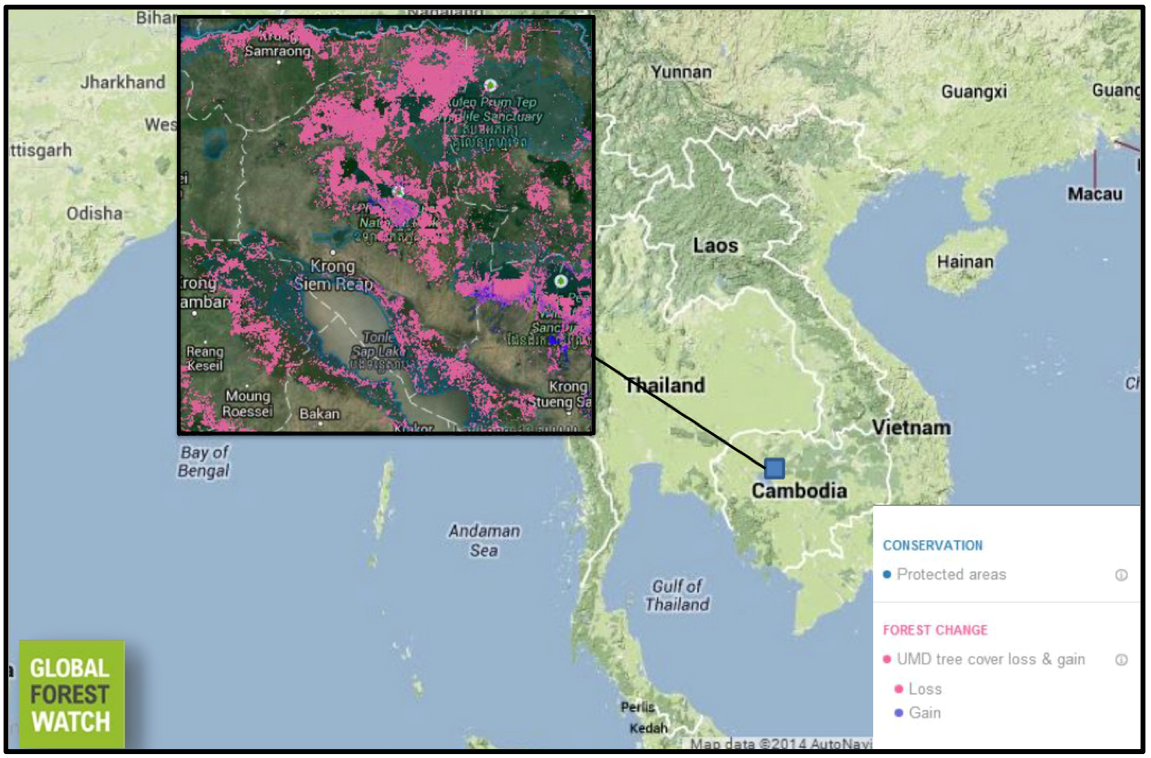 “One of the primary goals of the Programme is to conserve and enhance biodiversity for both environmental and community benefits,” Rob Harris, Programme Manager of the Asia-Pacific Community Carbon Pools and REDD+ Programme, told mongabay.com. “FFI and Forestry Administration [of the Cambodian Government] officers trained community members in the basics of Global Positioning System (GPS), and how to record waypoints, forest crimes (illegal logging and animal poaching), and wildlife movements. GPS is cited as a very effective forest monitoring tool that has aided in the prosecution of people involved in forest crime. Until the community forest is officially legalised, local villages are playing a key role in forest protection as its guardians.”

Since January 2014, trained community members have patrolled the forest, accompanied by district, provincial, and local authorities. They use GPS points to mark any forest crimes, such as the location of animal traps. This information is shared with district authorities and the Forest Administration. Community monitoring appears to have reduced instances of illegal land clearing and logging.

The Siem Reap community forest has a defined boundary and is largely surrounded by cassava plantations. A few farms, or “chamkars,” had already been cleared within the forestry area before it was designated. These have been allowed to operate under the condition that they don’t expand their operations. 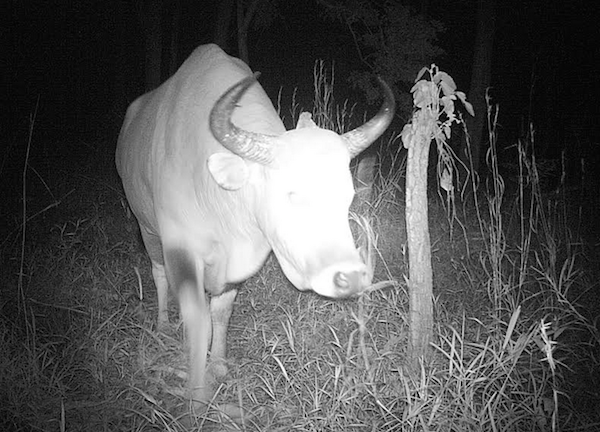 A photo of a member of the recently discovered population, taken by a camera trap. Photo by Caleb Jones, ISAC.

According to the IUCN, areas with the best banteng habitat in Cambodia face an “uncertain future with the possibility of [de-gazettement] of conservation status of parts of them, the possible loss of adequate external funding necessary to maintain high standards of management, the possible loss of political support necessary to uphold high protection standards, and the uncertainties of maintaining a motivated and well-trained staff.”
Empowering communities to take responsibility for their forests may address many of these problems.

A study published earlier this year in Conservation Biology reported the success of a similar community forestry program.

“Our research…used both ground-based surveys and analysis of satellite imagery,” co-author Daniel Bebber of University of Exeter told mongabay.com. “[It showed] conclusively that community forests are better protected than those managed by the government. Local people have a stake in their natural environment, and our work found that the more active the villages are in organising patrols, the better the protection works.”

According to the study, community forests are most successful when members are allowed to sustainably harvest forest produce to augment their income.

The community forest in Siem Reap may provide such an opportunity, too. The oily resin tapped from the numerous trees of hairy-leafed apitong (Dipterocarpus alatus) is used to waterproof baskets and boats, as well as in paints, varnish, and lacquer. The money earned is likely to act as an incentive for people to protect the forest and the wild cattle of this part of Cambodia.

According to Bebber, action on the part of the government is needed to stem environmental degradation on the national scale.

“Unfortunately, Cambodia still faces serious illegal logging and corruption, and the government must do more to curb the onslaught on Cambodia’s natural heritage,” Bebber said. 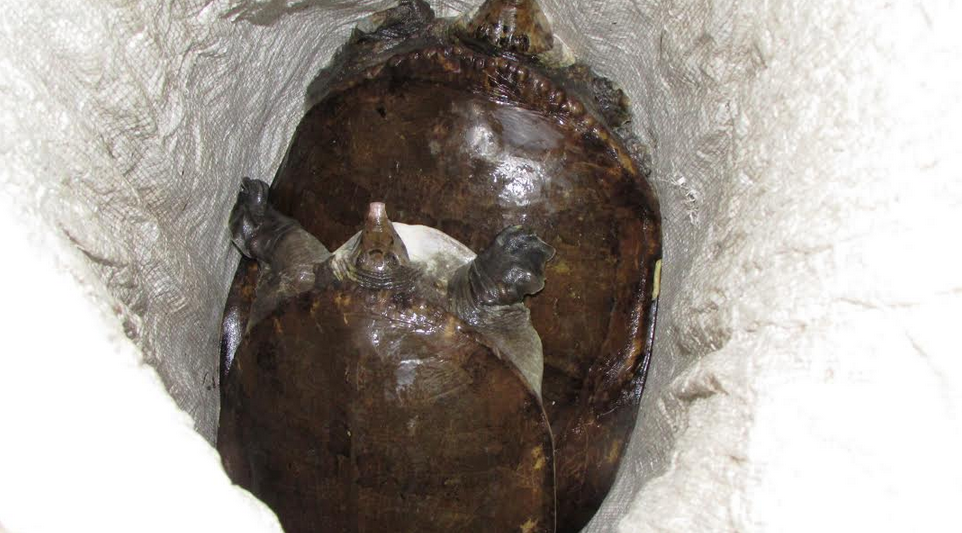 The region where the banteng were rediscovered is home to many other threatened species, such as these endangered Asiatic softshell turtles (Amyda cartilaginea). Photo by Ou Samon, FFI.

Besides forest loss, the banteng face other threats such as hunting, diseases transmitted by domestic cattle, and hybridization.

“Due to the high risk of hunting in Siem Reap Province, FFI has chosen not to disclose the exact location at which banteng were photographed,” Harris said.

In addition to declines in their numbers, banteng behavior has also been changing as the animals adapt to a changing world.

“Human disturbance is also thought to be the main factor causing the banteng’s switch from diurnally active to nocturnal across most of its remaining range,” said Jones. “Local guides said they remember seeing herds of banteng active during the day at lower levels more than 10 years ago. If human disturbance could be reduced at this site, potentially banteng would make more use of the low-level, dry deciduous forest for grazing in the future.”

The Siem Reap community forestry program must walk a fine line between reducing disturbance to the forest so banteng may thrive, while fulfilling human livelihood concerns. If it succeeds, it may well foster not only the success of the banteng, but other endangered species such as the prime predator of these jungles, the Indochinese tiger (Panthera tigris corbetti). 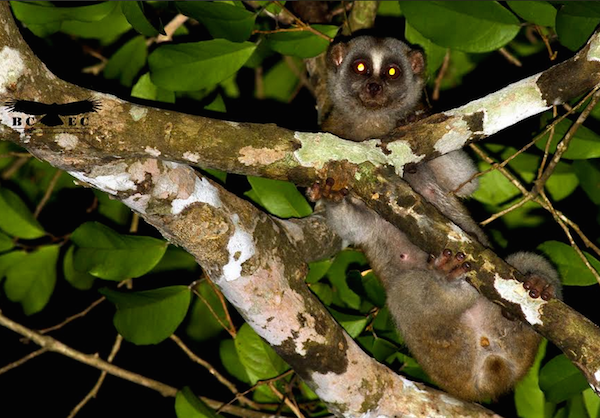 Bengal slow lorises (Nycticebus bengalensis), listed by the IUCN as Vulnerable, are declining due to habitat loss and the exotic pet trade. They are also hunted for traditional medicine. Photo by Senglim Suy, Birds of Cambodia Education and Conservation. 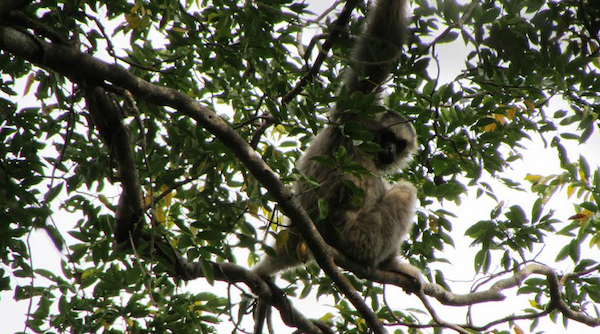 (01/30/2014) Forest disturbance in Madagascar and Vietnam increased significantly in the aftermath of cyclones that hit the countries last year, according to a forest tracking tool developed by a team of NASA researchers.

(01/22/2014) A study on deforestation in Cambodia has found that forests are better protected when local communities are given the responsibility to manage them locally. Cambodia has one of the highest rates of deforestation in the world, losing 1.2 per cent each year from 2005-2010. The loss of forests due to illegal logging, commercial agriculture, and other factors can have a devastating impact on local communities, as well as contributing to global climate change. In a country beset by corruption and ineffectual state forest management, alternative models of forest protection are clearly needed.