‘Hope springs eternal’: the anniversary of the death of Lonesome George

Today marks the two-year anniversary of the death of Lonesome George, the world’s last Pinta Island tortoise. The occasion calls attention to the declines of many turtle and tortoise species, which together form one of the most swiftly disappearing groups of animals on the planet.

Since he was discovered in 1972, Lonesome George had always been the last of his kind. Pinta Island tortoises (Chelonoidis nigra abingdonii), a subspecies of Galapagos tortoises, were wiped out when goats were introduced to the island and decimated their food supply. To ensure his survival, Lonesome George was transferred to a research facility on another island. 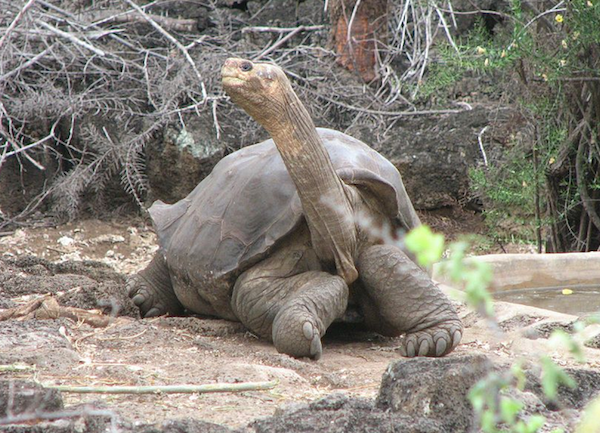 For much of his life, Lonesome George was considered the rarest creature in the world. Photo by Mike Weston.

There, he was housed with two females of another subspecies in the hopes of continuing at least part of the legacy of the Pinta Island tortoise. However, no Lonesome George Juniors ever came of their time together.

Researchers even offered a reward of $10,000 to anyone who found a viable mate, to no avail.

“An attempt was made to have him mate with a close relative but he seemed uninterested,” Eric Goode, founder of the Turtle Conservancy, told mongabay.com.

Turtles and tortoises are an ancient line of animals that stretches back more than 200 million years, to before the appearance of lizards, snakes, crocodiles, and even dinosaurs. As a group, they have survived multiple mass extinction events and climatic upheavals. But today, nearly half of the world’s 350 species are threatened with extinction.

Currently, the most significant threats affecting turtles and tortoises include habitat destruction, hunting for food and other uses, and collection for the exotic pet trade.

“Turtles and tortoises are amongst the most threatened group of animals worldwide,” Goode said. “They are especially in trouble in South East Asia. In addition to habitat loss turtles are subjected to massive poaching for Chinese food and traditional medicine.” 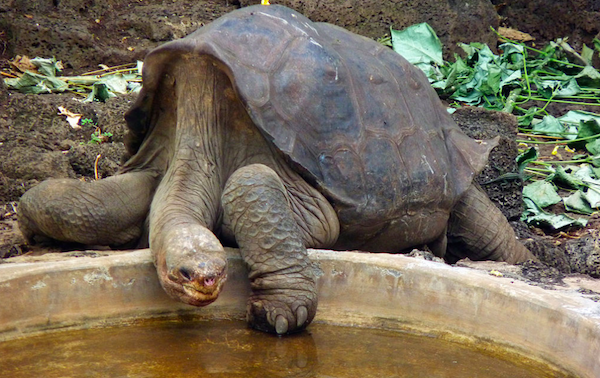 Lonesome George gazes into a pool of water, his only option to see one of his own kind. Photo by Magnus Manske.

In addition, unlike most mammals and birds whose sex is determined by their genes, the sex of turtles is controlled by temperature. For leatherback sea turtles (Dermochelys coriacea), the largest turtle in the world and one of the most threatened, any deviation below 29.5 Celsius (85.1 Fahrenheit) will cause a clutch of eggs to produce mostly females; above 29.5C, the hatchlings will be mostly male. As the earth’s temperatures fluctuate in response to global warming, researchers are concerned that baby turtles will be skewed towards either one sex or the other, which may further reduce the chances of long-term survival of many populations.

Lonesome George was found dead in his pen on June 24, 2012, by Fausto Llerena, his caretaker of 40 years. Llerena was part of the original expedition that found the tortoise and helped relocate him to Santa Cruz Island, where he spent the remainder of his life.

“He came toward me and he stopped and stretched his neck out, opened his mouth like a greeting, welcoming me,” Llerena told the New York Times. “He was like a member of the family to me. To me, he was everything.”

No one knows exactly when Lonesome George was hatched, but most estimates place his age at death at around 100 years. A necropsy revealed he died of old age. However, other Galapagos tortoises have been known to live far longer; one individual lived at least 170 years. The giants grow slowly as they age, topping out at nearly 900 pounds (400 kilograms). 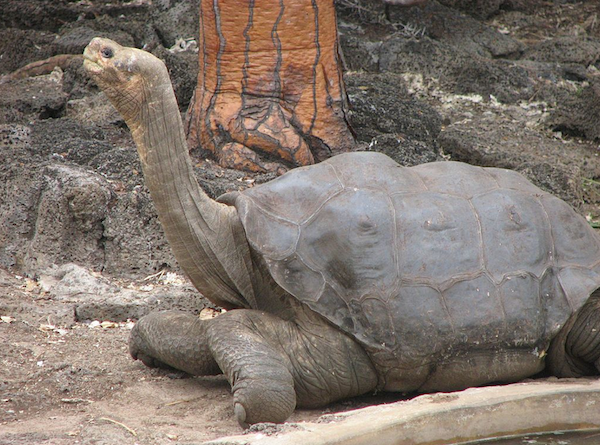 The Galapagos tortoise is the largest living tortoise species and the 13th-heaviest reptile. Photo by Mike Weston.

Galapagos tortoises have been affected by human exploitation and disturbance for centuries. They were popular food sources on 17th century voyages as they could be taken aboard boats and allegedly survive for up to two years without food. By 1974, the total population of Galapagos tortoises had plummeted from an estimated 250,000 individuals to just 3,000.

Today’s conservation efforts have brought the number of Galapagos tortoises up to nearly 20,000, due primarily to enforced protections, island restoration, and captive breeding. In particular, the Hood Island subspecies has seen a dramatic comeback. Reduced to just 14 individuals in the 1970s, their population now stands at 860.

“The Galapagos Islands national park and its many collaborators have a long tradition of breeding other kinds of Galapagos tortoises and of managing their habitat and eliminating invasive species such as rats,” Goode said. “The breeding and reintroduction of the Hood Island tortoise is one of conservation’s great successes.”

For Pinta Island tortoises, conservation attention came too little too late. But technological advancements may lend potential – if speculative – options.

“Hope springs eternal,” Goode said, “and it is possible that Lonesome George could be cloned in the future.”

(06/11/2014) A recent survey conducted by researchers from the U.S. and Mexico has uncovered staggering levels of biodiversity in the delicate desert environment of Cabo Pulmo in Baja California. Their findings have stymied construction of a proposed $3.6 billion resort, but developers are not giving up.

(02/11/2014) Biologists recently documented one of nature’s least-known, big events. On the banks of the Purus River in the Brazilian Amazon, researchers witnessed the mass-hatching of an estimated 210,000 giant South American river turtles (Podocnemis expansa). The giant South American river turtle, or Arrau, is the world’s largest side-necked turtle and can grow up to 80 centimeters long (nearly three feet).