‘Exciting implications’ for conservation: new technology brings the lab to the field

Advancements allow on-the-ground genetic analysis, can be used by scientists and novices alike

For decades, genetic analysis has been limited to the laboratory domain. It required heavy, expensive equipment, and careful, sterile techniques that would have been impossible to carry out effectively outdoors. And so, the researchers who collected DNA in the field would have to store their samples carefully and hope they wouldn’t degrade during the long journey out of the wild and back to the lab, sometimes taking many weeks and thousands of miles.

But times have changed. Technological advancements have scaled down scientific equipment in terms of both size and cost. Among these are the tools and procedures needed to conduct molecular genetic analysis. A study published this week in mongabay.com’s journal Tropical Conservation Biology explored the potential applications of this new technology, and found that it allows both researchers and novices alike to analyze DNA in the field easily, cheaply, and effectively. 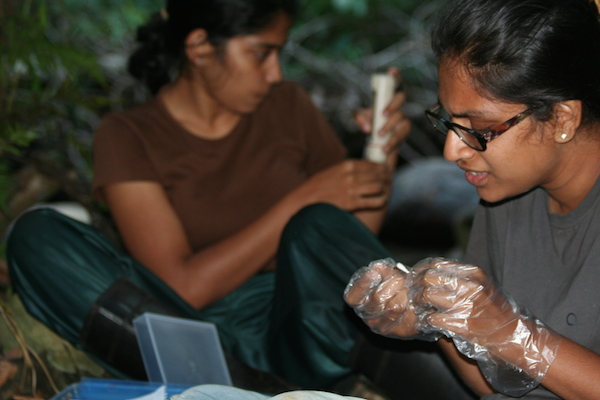 Researchers swab frogs for chytrid fungal infection in Karnataka, India. They had to send their samples to a lab for processing, which often takes weeks or even months. But with on-the-ground genetic analysis possible, they soon may be able to do all their testing in the field. Photo by Morgan Erickson-Davis.

According to the researchers who are from institutions in the U.S. and U.K., the applications of this technology could revolutionize field biology.

“These findings have exciting implications for work that can be done in remote locations, often areas of the greatest conservation significance,” the authors write.

Genetic information is important for many aspects of conservation. It allows researchers to determine how related animals and plants are both to others in their own populations, as well as to outside populations, and thereby determine which populations are most at-risk of extinction.

“As more conservation theoretical work incorporates genetics, conservation practitioners in expedition groups increasingly require more information about the genetics of the organisms they work with,” the study states.

“Therefore, the goal of this study was to develop effective and inexpensive methods for novice expedition volunteers to perform accurate genetic analyses while in remote locales.”

To test the equipment and procedures, the researchers traveled to Cusuco National Park, a 23,400-hectare protected area carved out of mountainous Honduran forest. The park boasts many habitat types – from pine forest to tropical cloud forest – and contains significant biodiversity. Indeed, it is home to six species of amphibians and seven species of reptiles that are found nowhere else in the world.

“It is part of the Meso-American biodiversity hotspot,” the authors write, “and was recently ranked as the 25th most irreplaceable of all the world’s 173,461 protected areas…for conserving threatened amphibian species.”

Because experienced field scientists are relatively few and far between, the researchers conducted their tests using local volunteer naturalists who were novices when it came to genetics techniques. The team collected tissue samples from different animal and plant species, extracted DNA, and analyzed it for specific genetic markers that are used to determine relatedness. Their results were then compared to those produced by tried-and-true lab analysis.

The researchers found the field analysis techniques and equipment were successful for all 20 species tested, and could be used quickly and at low cost. In addition to reducing the risk of DNA sample degradation from its journey to the lab, the team suggests that field analysis will allow for the development of more effective conservation studies.

“A major advantage of being able to conduct molecular analyses rapidly at remote sites is the ability to respond/change experimental design or collection patterns because of molecular genetic data” they write. “This is particularly useful for research that is conducted in relatively short field seasons, or where urgent conservation action is required.”

One specific application of this technology is the detection of the chytrid fungus (Batrachochytrium dendrobatidis), a deadly pathogen that is wiping out frog populations around the world. In-situ genetic analysis could allow for the detection of the fungus within days of sampling, as opposed to the weeks or months it currently takes.

“These results allow real-time modifications of sampling regimes,” the study states. “Our work documents that field conservation genetics can be done by novice researchers, and greater familiarity with molecular biology may increase genetic sampling in remote regions with high biodiversity.”