‘Borne by the rest of the world’: deforestation has global impact, reduces food security

Research indicates that areas with more forest cover tend to have superior food security compared to areas with less. In addition, the loss of forest cover to deforestation has long-term impacts not only locally, but also globally. These topics were discussed by international experts during the 2020 International Food Policy Research Institute (IFPRI) Conference on Building Resilience for Food and Nutrition Security, held last month in Addis Ababa, Ethiopia.

“[The direct connection between food resilience and forest cover] is not very clear, but there are facts that people are taking food from the forest, hunting, collecting food, shifting cultivation systems,” Robert Nasi, a scientist with the Center for International Forestry Research (CIFOR), told Mongabay-Indonesia. “People [are] taking these from forests. What we see that in regions that have more forests, people are better nourished than anywhere else.”

Deforestation for an oil palm plantation in Central Kalimantan in 2013. Photo by Rhett A. Butler.

In southern Africa, people who have trees on their farms were three times less likely to have hunger problems during the year rather than those without trees, according to Nasi.

“If you plant trees, you can’t go wrong,” he said.

Furthermore, he highlighted the importance of educating local people to diversify crops and thereby reduce the risk of food scarcity.

“Don’t put your eggs in one basket. If you lose the basket, you’ll lose everything,” Nasi said. “You’ll have [to cope with more change] if something wrong happens. The problem is that [crop diversification is] not the type of design that brings you money. But if you only have oil palm and something goes wrong, then you’ll have a problem. It’s the same if you only have rice and you don’t have forests.”

Every day, approximately 50,000 hectares of forest are lost. The effects of forest loss are echoing beyond local vicinities, to the global community. Ephraim Nkonya, a senior research fellow at the International Food Policy Research Institute (IFPRI), warned these effects will only become more pronounced with time.

“Indonesia has large tropical forest and also large expansion of tropical forest,” he said. “In Indonesia, there is a time when they burn tropical forest. That is one problem that once those forests are burning, the cost is more to the world than to the local people because of the emission of the carbon dioxide and also the loss of the carbon sequestration the forest [would otherwise provide],” said Nkonya.

Based on the 2009 National Council on Climate Change report, Indonesia is the third largest emitter of greenhouse gases originating from the degradation and destruction of peatlands (45 percent) and forests (35 percent), releasing a total of 1.8 billion tons of greenhouse gases every year. Indonesia is also responsible for emitting eight percent of the global carbon dioxide emission load.

“Yes, there is also loss locally but the largest loss, about 62 percent, is borne by the rest of the world,” said Nkonya, adding that oil palm plantation development is the largest source of deforestation in Indonesia. “Now, if you replace the forest, you cut the forest and you plant palm oil, the loss again is more to the world than to Indonesians.”

According to Nkonya, the loss of ecosystem services due to human alteration of the environment costs the planet $3.52 trillion every year. 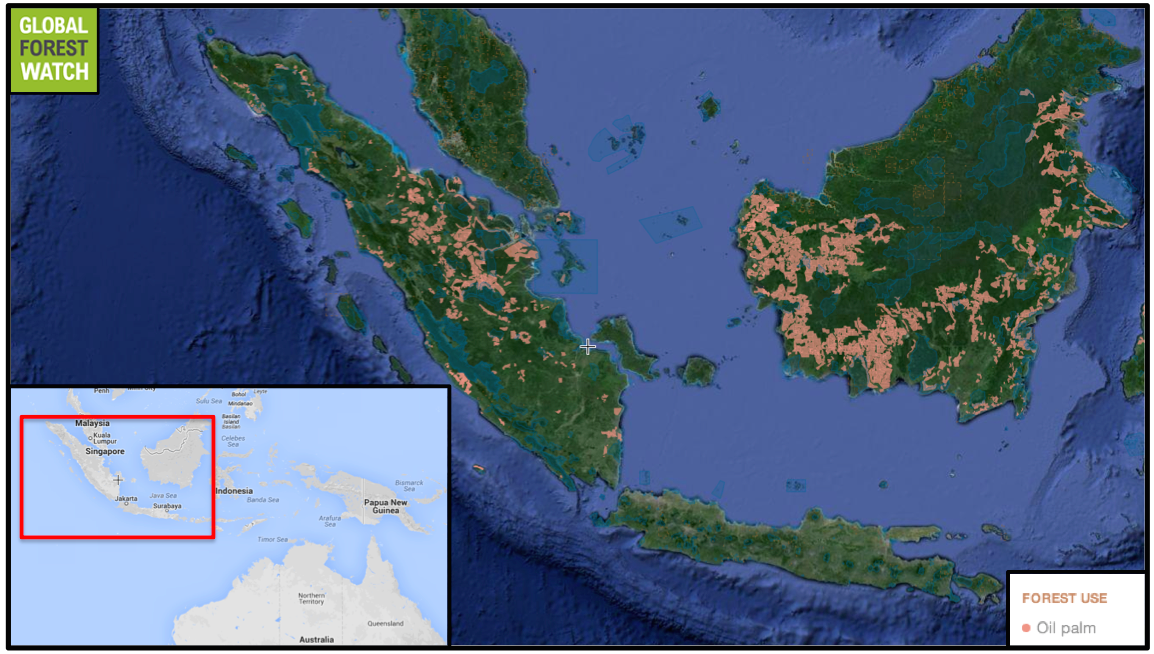 In 2012 alone, Indonesia lost more than two million hectares of forest, much of it to oil palm plantation development. Map courtesy of Global Forest Watch. Click to enlarge.

Nkonya believes that in order to stem deforestation, there must be collaboration between the government of Indonesia, its people, and the rest of the world.

“We should reward the farmers who are not cutting their forests to plant palm oil because when they do the math, when they do the comparison of the direct benefit they derive from planting palm oil or keeping the forests, the direct benefit of palm oil is higher than the benefit of keeping the forest,” he said. “That’s why they’re cutting it, they’re not stupid, they are very good economists, that’s why they’re cutting it.”

Furthermore, he underlined the importance of a long-term focus, as reforestation requires a substantial time commitment.

Palm oil isn’t the only agricultural contributor to deforestation. Corn, soy, and cattle production are also resulting in millions of hectares of forest loss every year.

“[The calculation was done for] palm oil, but I am not going to be surprised to find more or less the same [association] between maize and forest,” Nkonya said. “That’s why most people cut the forests, because they are looking only at the direct tangible benefit that comes to them. They don’t care about carbon sequestration, [which provides significant] benefits to the world.”

According to Nkonya, conversion of forests to palm oil plantations does increase farmers’ food security as a direct tangible benefit in the short-term.

“But, looking at the broader picture, [it is] not only about the food we eat but also climate variability and climate change. [The] regulation services that are provided by the forests are lost when we cut the forest [and] plant palm oil,” he said.

Nkonya described the nature of the ecosystem services as interdependent on one another, and that an effective solution must be composed of many different courses of action, such as cooperation between nations. He also believes that the people who manage areas at risk of deforestation should be provided with incentives to protect their forests instead of cutting them down.

“In the long-term, the effects [of deforestation are going to] come to you and to the rest of the world,” he said. “This is not an issue that should be overlooked at the local level, [nor at the] national and global level.”

(06/05/2014) Conflict from mining activities on Bangka Island off North Sulawesi, entered a new chapter after a local resort manager voiced concern over an incident involving its clients and mining staff last Saturday.

(05/29/2014) Next week, the rainforests of Southeast Asia are going live. On June 2nd, 11 organizations in the region will be posting lives video, photos, and wildlife sightings over 24 hours on Facebook and Twitter (see #rainforestlive). Dubbed Rainforest: Live, the initiative hopes to raise awareness of quickly vanishing ecosystems and species.