President Obama announced yesterday he intends to drastically expand the Pacific Remote Islands Marine National Monument making what will likely be the largest marine protected area (MPA) on the planet. While the full extent of the ocean park has yet to be determined, it could potentially protect over two million square kilometers, an area larger than Mexico.

Obama’s announcement was made via video during a State Department-led conference dubbed Our Oceans. The full extent of the expanded MPA will not be announced until after a public comment period and discussions with scientists, conservationists, and fisheries.

“This area contains some of the most pristine tropical marine environment in the world,” said White House senior counsel John Podesta. “These tropical coral reefs and associated ecosystems are among the marine environments facing the most serious threat from climate change and ocean acidification.”

Notably the expanded protected area will ban any commercial fishing and drilling, although it may allow recreational fishing. Nearly three percent of the world’s oceans are under some form of protection, yet less than half of these are fully protected. 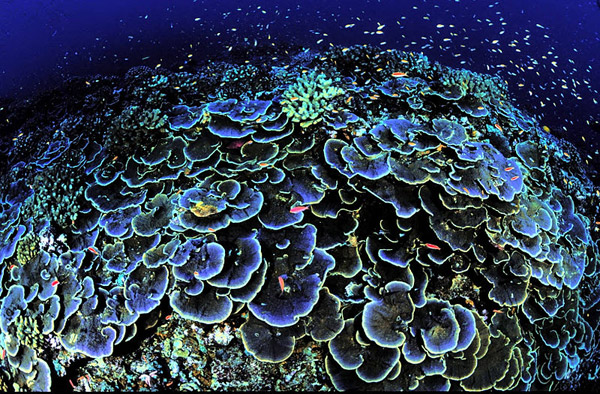 The Pacific Remote Islands Marine National Monument was first created in 2009 by then President George W. Bush. Currently, the protected area—which covers seven remote islands, atolls, and reefs—is almost 200,000 square kilometers with coverage extending in a radius of about 93 kilometers around each island, but Obama could push the radius up to 686 kilometers.

“Like Presidents Clinton and Bush before me I am going to use my authority as president to protect some of our most precious marine landscapes, just like we do for mountains and rivers and forests,” Obama told the summit in a video.

Conservationists have warned in recent years that marine biodiversity could suffer from mass extinction due to overfishing, global warming, ocean acidification, and pollution among other impacts. In 2002, the Convention on Biological Diversity (CBD) set a goal of protecting 10 percent of marine waters by 2020. But nations look to fall short of this goal with only about 2.8 percent of the world’s marine waters under some type of protection today.

The Our Oceans conference was also notable for the U.S. creation of a new task force to tackle illegal and unreported fishing; an announcement by the Pacific island nation of Kiribati that it will close its 408,000-square kilometer Phoenix Islands Protected Area to industrial fishing by the end of the year; and a donation by actor Leonardo DiCaprio of $7 million over two years for marine conservation efforts.

(06/09/2014) Scientists analyzed almost half a million fish bones to shed light on the population history of Pacific herring (Clupea pallasii) in the North Pacific Ocean. Their paper reveals a decline of unprecedented scale, and suggests that while the abundance of Pacific herring does fluctuate naturally, their numbers have fallen precipitously since commercial fishing started targeting the species in the 19th century.

(05/28/2014) Previous research has linked trawling to significant environmental impacts, such as the harvest of large numbers of non-target species, collectively termed “bycatch,” as well as destruction of shallow seabeds. Now, a new study finds this method is also resulting in long-term, far-reaching consequences in the deeper ocean and beyond.

(05/09/2014) In the waters off the coast of northern Australia lives a species of feathery coral. Years ago, bits of it were collected by the Australian Institute of Marine Science and stored at the National Cancer Institute’s extract repository, along with 200,000 other samples. Researchers retrieved and tested this coral sample, and recently reported that it was very effective at blocking HIV infection of host cells.

(04/25/2014) Conservation groups were jubilant in response to last month’s ruling by the International Court of Justice (ICJ) banning Japan’s long-standing “research” whaling practices in the Antarctic. However, the celebrations proved short-lived after news last week that Japan has rescinded its agreement to abide by the ruling and stop whaling altogether, opting instead to redesign its program and continue whale hunts in the Southern Ocean.