This April was notable for being the 350th month in a row where temperatures exceeded the 20th Century average. This means, monthly global temperatures have not fallen below average for even a single month since February 1985.

In fact, the National Oceanic and Atmospheric Administration (NOAA) found that April 2014 was tied with 2010 for the warmest on record going back to 1880.In all this April was 0.77 degrees Celsius (1.39 degrees Fahrenheit) above the 20th Century average. While portions of the U.S., Canada, and Central Asia were below average, Europe, Australia, the Middle East, northern Africa, and Siberia were significantly above.

As the Earth has warmed rapidly over the last century due to burning fossil fuels, so has the continued probability of each month being warmer than a longterm average. Since the late 19th Century, the world has warmed about 0.8 degrees Celsius (1.44 degrees Fahrenheit), but future warming largely depends on how quickly global society combats greenhouse gas emissions.

Countries worldwide have pledged to keep warming from exceeding 2 degrees Celsius (3.6 degrees Fahrenheit), although some experts warn even this target is to high.

According to scientists, nations have moved slowly in tackling global warming with greenhouse gas emissions continue to rise unabated. Progress may be coming though: the U.S. just announced a long-awaited policy to cut CO2 emission from power plants while China says it will set a absolute cap on its own emissions. Countries are expected to come up with a new international agreement on climate change in Paris, 2015. 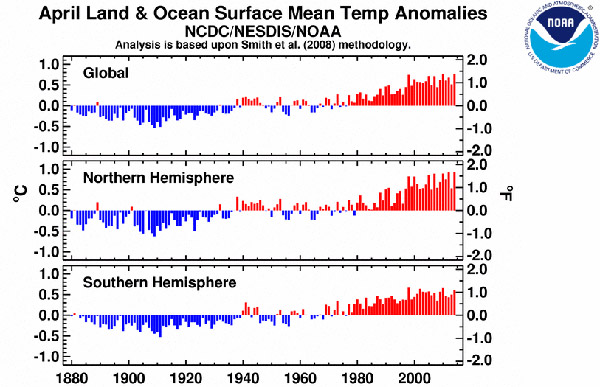 Aprils from 1880 to today. Graph courtesy of NOAA. 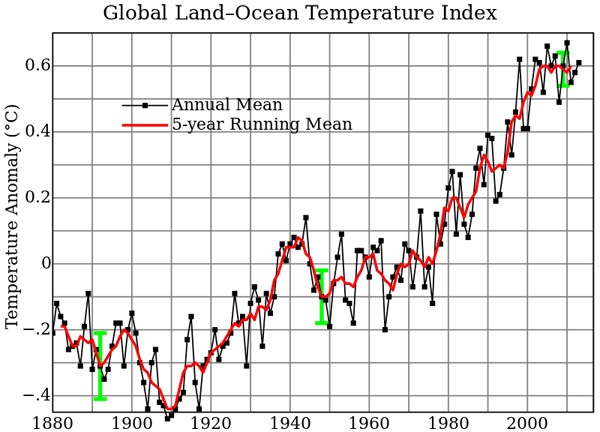 Global mean temperatures from land surface and oceans. Black line is each year, while the red line is 5-year-averages. Graph courtesy of NASA-GISS.