Bottom trawling is a practice used by commercial fisheries around the world in which a large, heavy net is dragged along the ocean floor to scoop up everything in its path. Previous research has linked trawling to significant environmental impacts, such as the harvest of large numbers of non-target species, collectively termed “bycatch,” as well as destruction of shallow seabeds. Now, a new study published in Proceedings of the National Academy of Sciences finds this method is also resulting in long-term, far-reaching consequences in the deeper ocean and beyond.

Trawling dates back to the 1300s, and it became widespread in coastal areas around the world after the industrialization of commercial fishing in the late-1800s. Bottom trawling targets commercially valuable species that live near the sea floor, such as cod, rockfish, and various kinds of squid and shrimp. Gear varies depending on the fishing outfit, but nets can be nearly as large as a city block and scoop thousands of fish and other marine animals in a single drag. 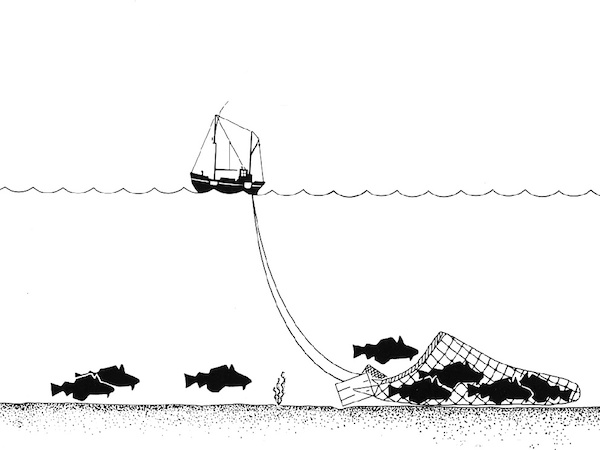 In bottom trawling, a large net is dragged by a boat along the seafloor.

Bottom trawling has one of the highest bycatch rates of all commercial fishing practices. In the North Pacific, the practice accounts for 18 percent of annual groundfish harvests, and 82 percent of the region’s discarded by-catch. At times, bycatch accounts for upwards of 90 percent of a net’s total catch.

In addition to directly killing many fish and other marine species, studies have shown that bottom trawling is very destructive to the seabed. It dislodges sediment, which destroys the habitat of ground-dwelling organisms, makes the water more opaque and unsuitable for many species, and releases pollutants and carbon that had been trapped below the seafloor.

As populations of many fish species dwindle due to intensive commercial fishing effort, bottom trawling outfits are searching for new fishing grounds in ever-deeper regions of oceans around the world. However, this new study indicates that deeper ocean bottoms are also being affected by trawling, as the nets destroy delicate seafloor ecosystems at a level akin to desertification.

“Cumulatively, the impacts of trawling on the sediment structure, the benthic biodiversity, and the most basic of all of the nutritional resources in these deep-sea sedimentary ecosystems resemble the catastrophic effects caused by man-accelerated soil erosion on land, and the general environmental deterioration of abandoned agriculture fields exposed to high levels of human impact,” write the researchers, from various institutions in Italy and Spain.

Benthic, or ocean-bottom, ecosystems in the deep sea may need an even longer time to recover than near-shore environments, and may be impacted in ways that echo beyond the confines of their depths – and beyond the oceans, themselves.

“Although we have investigated only one site in a certain time of the year, our results highlight the dramatic impact of trawling below 500-meter (1,600-foot) depths: we do not have information on the time of recovery in our study area because it is trawled all the year round on weekdays, two times per day since about 30 years!” Antonio Pusceddu, of Italy’s Marche Polytechnic University and lead author of the study, told mongabay.com.

“Nevertheless, since deep-sea fauna have longer life spans than the shallower counterparts, we can reliably hypothesize that the time needed to recover after an eventual cessation of trawling activities could be sensibly longer (maybe years or decades) than the time needed for shallow benthic communities,” Pusceddu said. “So, the major difference in the time of recovery from trawling impact is clearly linked with the depth at which trawling is carried out.”

The researchers compared sediment samples from trawled and non-trawled areas off the coast of Spain, and found that bottom trawling severely reduced the overall amount of very small animals living in deep-sea sediments. Particularly affected were nematodes, tiny worms that make up the dominant group in these environments, and which are very important for ecosystem processes.

“[Prior research] provided evidence for the first time ever that the loss of even a few species of nematodes in deep-sea sedimentary habitats may result in a ‘collapse’ of deep sea functions,” Pusceddu said, adding that they found approximately “20 species in trawled bottoms and about 34 species in undisturbed sediments.”

Carbon consumption by deep-sea meiofauna is an important part of the carbon cycle, by which carbon is exchanged between the land, sea, and air. The researchers believe that the ubiquity of bottom trawling along the world’s coasts may be affecting carbon cycling in significant ways.

“Deep-sea trawling is currently carried out along large sectors of the oceans,” write the authors, “and it appears to have severe consequences on deep-sea sediment dynamics at a global scale.”

These consequences may be echoed up marine food chains, as many organisms are ultimately dependent on meiofauna for energy and nutrients. In addition, some meiofauna are actually the larvae of bigger, or macrofaunal, species. Damage to deep-sea beds by trawling may mean both depletion of an important food source and destruction of nurseries for many species. 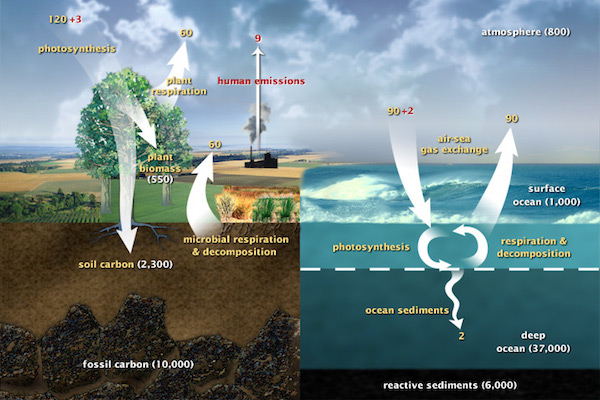 Ocean sediments are an important player in the global carbon cycle.

Trawling not only destroys meiofauna outright, but also disrupts the layer of carbon-rich material that is their primary energy source. This material then hangs suspended in the water where it either takes a long time to re-descend, or is moved by ocean currents to even deeper parts of the ocean and away from the organisms that depend on it.

Several nations have imposed restrictions on bottom trawling. For instance, the U.S. banned bottom trawling off most of its Pacific coast in 2006, and Palau has both banned it throughout its jurisdiction as well as prohibited any Palauan citizen or corporation from participating elsewhere in the world. A few multinational fisheries commissions have also imposed regulations on bottom trawling in two of the most affected regions – the mid-Atlantic Ridge and the South Pacific. However, a bid by Palau to ban unregulated bottom trawling beyond the national level was blocked during United Nations negotiations by Iceland and other opposing countries.