Two hundred years from now, the planet could look very different. This week two landmark studies revealed that West Antarctica’s ice sheet is in a state of seemingly inevitable collapse linked to climate change. The slow-motion collapse would by itself eventually lead to a rise in global levels of 3.6-4.5 meters (12-15 feet), overrunning many of the world’s islands, low-lying areas, and coastal cities. The only silver lining is that scientists conservatively estimate that the collapse could take 200-1,000 years.

“There’s been a lot of speculation about the stability of marine ice sheets, and many scientists suspected that this kind of behavior is under way,” said Ian Joughin, a glaciologist with the University of Wisconsin, who co-authored a study in Science focusing on a key glacier in the region, Thwaites Glacier.

Moreover these estimates only account for Western Antarctica, and not other ice losses across the continent or in Greenland.

Joughin and his team used airborne lasers to better map the topography of the ground beneath Thwaites Glacier, giving them the most accurate view yet of how melting will occur.

But, Joughin told Climate Progress that their findings were “conservative” and “do not include all the feedbacks.” While they note that the likeliest timeline given current information is 200-500 years, the team also didn’t run a worst-case scenario, meaning the ice loss could occur even faster.

The Science study was complemented by other research from NASA on six glaciers in same region–including Thwaites–which came broadly to the same conclusion: the melting of the region’s glaciers has passed a tipping point. This team used satellite and airborne measurements to record the melting of the glaciers since the early 1990s and better map the topography.

“The collapse of this sector of West Antarctica appears to be unstoppable,” noted co-author Eric Rignot, with the University of California and NASA, whose study was published in Geophysical Research Letters. “At this point, the end appears to be inevitable.”

Unfortunately, the team found no hills or mountains that could slow the melt.

The findings also mean that the recent Intergovernmental Panel on Climate Change (IPCC) may already be out of date. The landmark report in September did not include melting from Antarctica in its estimates of sea level rise, which ranged from 0.28 meters to 1 meter (0.9-3.2 feet) by 2100.

While melting in the region is extremely complex, but both studies agree that stronger winds–possibly linked to climate change, the hole in the ozone layer or both–have pushed warmer waters underneath the glaciers, unhinging them.

“The fact that the retreat is happening simultaneously over a large sector suggests it was triggered by a common cause, such as an increase in the amount of ocean heat beneath the floating parts of the glaciers,” added Rignot.

While West Antarctica’s great melt may be inevitable, whether it takes a couple hundred years or a thousand may depend, at least partly, on how much fossil fuels are burned in the future, according to the researchers. 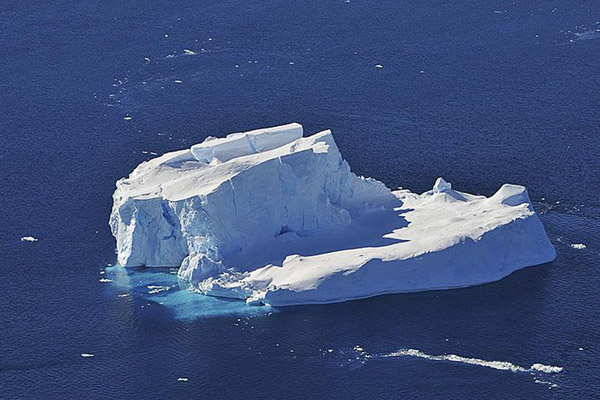 Iceberg in the Amundsen Sea off of Western Antarctica. As the glaciers melt, they often birth massive icebergs. Photo by: NASA.

A massive crack discovered on Pine Island Glacier in Western Antarctica which scientists now say is headed toward irreversible disintegration. The crack, discovered by an overflight in 2011, will eventually release a massive iceberg. Photo by: NASA.