Somalia could face another famine due to delayed rains, insecurity

Nearly a million people are in need of immediate food assistance in Somalia, where delayed rains, high food prices, and insecurity threaten a repeat of the 2011 famine that left 258,000 people dead. According to the UN’s Food Security and Nutrition Analysis Unit (FSNAU), 857,000 Somalis need immediate assistance while over 200,000 children under five in the country are currently suffering from acute malnourishment.

“The month of May remains critical during which, if rains fail, combined with sustained insecurity, we might see new levels of crisis unfold especially in southern parts of Somalia and the mainly pastoral northeast,” Daniel Molla, the Chief Technical Advisor of FSANU, said.

Rains in April were far below normal in the country’s north, which “has led to early depletion of fresh water sources for human and animal consumption,” according to a release from the FSNAU. “The two major rivers that support irrigated agriculture, the Juba and Shabelle, are currently below their normal levels for this time of the year and one meter lower compared to the levels of last year.” 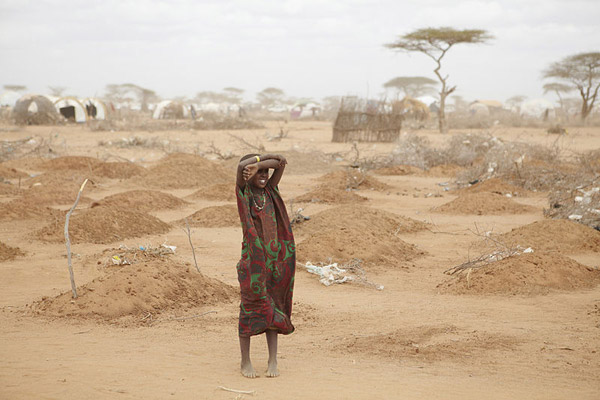 A girl stands in front of freshly dug graves in Dadaab, Kenya. The town was one of the places Somali refuges fled to during the 2011 famine, but many didn’t make it. Most of the dead were children. Photo by: Andy Hall/Oxfam East Africa/Creative Commons 2.0.

The situation is also exacerbated by an increasing battle against al-Shabab insurgents, who have blocked trade into some areas where they’ve been pushed out by Somali government troops.

“For instance, the price of red sorghum increased by 25 percent, while the prices of other essential imported food (rice, wheat flour, sugar, vegetable oil) increased in the range of 40-50 percent during the month in Hudur market of Bakool region,” stated the FSNAU.

In 2011, similar factors—failed rains and insurgency—led to Somalia suffering the worst famine worldwide in 25 years. According to an in-depth report last year, 258,000 people died in this famine, more than half children under five. The report blamed the international community for reacting too late and doing too little to stop the mass death.

“The suffering played out like a drama without witnesses,” Philippe Lazzarini, UN Humanitarian Coordinator for Somalia, said last year, adding “we could have done more before famine was declared on 20 July 2011…warnings that began as far back as the drought in 2010 did not trigger sufficient early action. In the worst affected areas, access to people in need was tremendously difficult.”