In a cave in Australia, researchers from the University of New South Wales discovered giant fossilized sperm. The sperm were produced 17 million years ago by a group of tiny, shelled crustaceans called ostracods, making them the oldest fossilized sperm ever found. The results were published recently in Proceedings of the Royal Society B.

The fossils were excavated in 1988, but it wasn’t known they contained sperm until they were studied in detail by an ostracod expert last year.

Ostracods, also called mussel shrimp, are common today in aquatic environments around the world and are famous for their big sperm. Individually, ostracod sperm average 1.3 millimeters (0.05 inches) in length, which might not seem large, but they’re often longer than the entire bodies of the ostracods that produced them. In order to fit in their bodies, the sperm are kept tightly coiled in the males’ sperm ducts until they’re transferred to females, which collect 50 to 100 sperm in specific receptacles during a lengthy mating process. 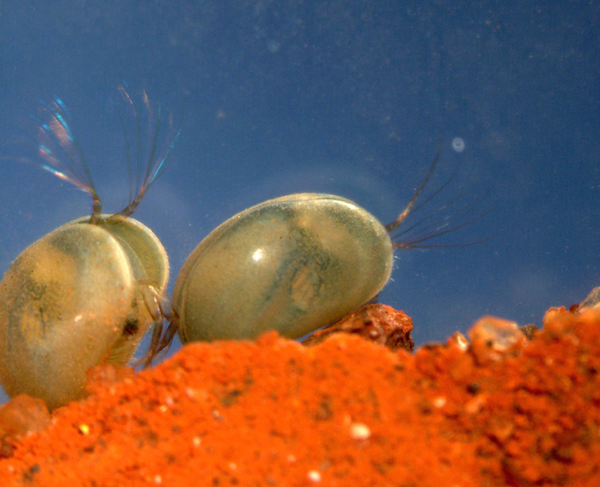 The modern freshwater ostracod Eucypris virens (1.5 millimeters long) also uses giant sperm cells for reproduction, although it is not a record holder with sperm being around 1.2 times as long as the male’s body. Photo by Renate Matzke-Karasz.

Sperm size varies with each species, with ostracods producing some of the largest sperm relative to body size of any animal. However, the current record-holder for largest sperm goes to Drosophila bifurca, a species of fruit fly, whose sperm can be up to 5.8 centimeters (2.3 inches) long. In contrast, humans have some of the smallest sperm, at 0.004 centimeters (0.002 inches).

As yet, scientists aren’t sure why giant sperm evolved, but speculate that it seems to have conferred significant advantageous as sperm gigantism evolved in many different species and in many different forms. For instance, in fruit flies, the sperm is almost all “tail,” whereas ostracod sperm is all “head” and moves by rotating its body in a screw-like way.

The fossil ostracod sperm were found in a cave in Queensland, a site that has been excavated for decades and which has yielded many fossils. The researchers speculate the sperm were fossilized so well because they were buried in “tons” of bat guano, which preserved the sperm before they could decay. In addition, ostracod sperm have a tough outer coating that likely aided their preservation.

“The Riversleigh fossil deposits in remote northwestern Queensland have been the site of the discovery of many extraordinary prehistoric Australian animals, such as giant, toothed platypuses and flesh-eating kangaroos. So we have become used to delightfully unexpected surprises in what turns up there,” said co-author Mike Archer.

“But the discovery of fossil sperm, complete with sperm nuclei, was totally unexpected. It now makes us wonder what other types of extraordinary preservation await discovery in these deposits.” 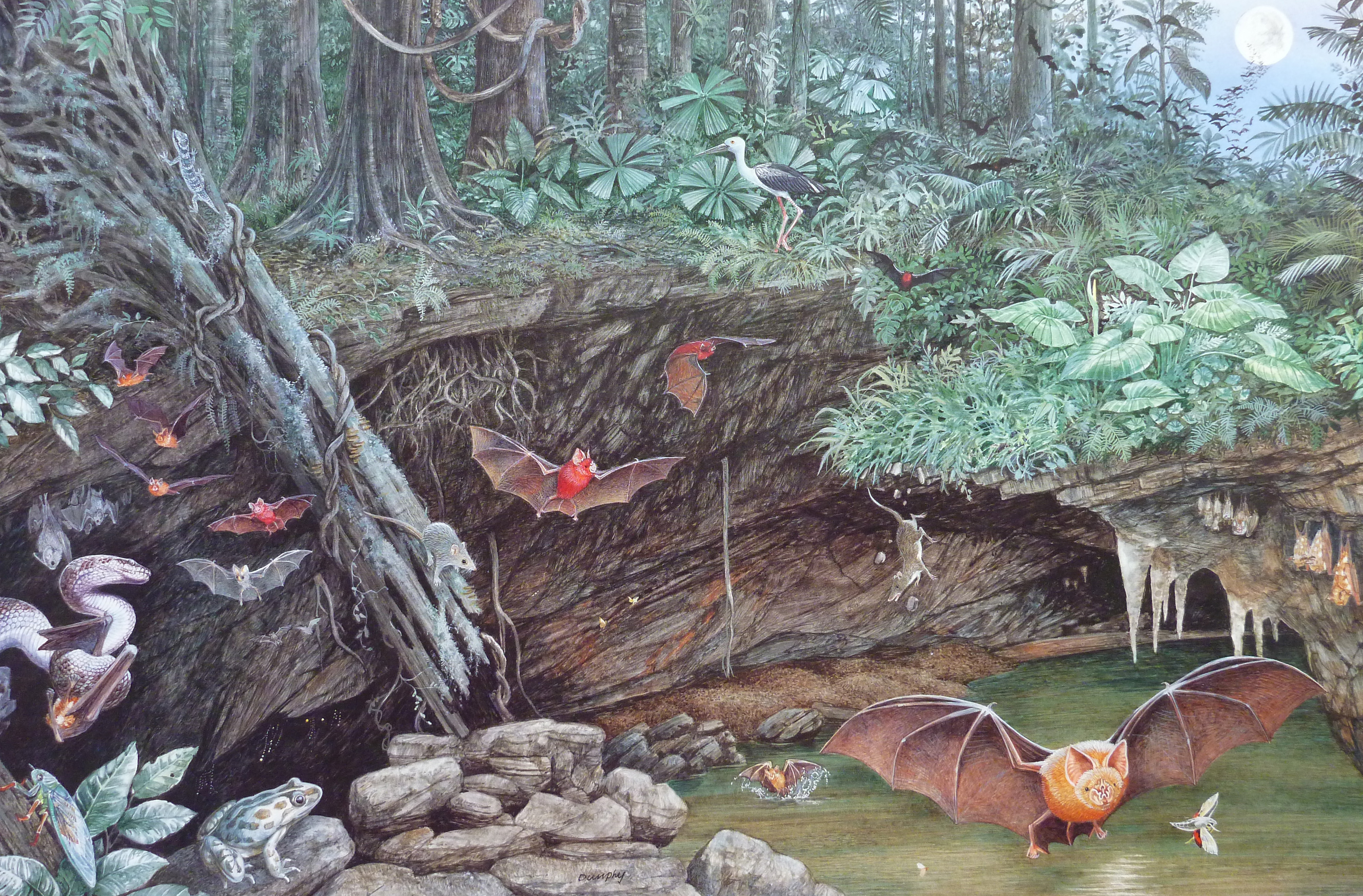 Artistic rendering of what the Queensland cave area at which the fossils were found may have looked liked 17 million years ago. By Dorothy Dunphy.Click to enlarge. 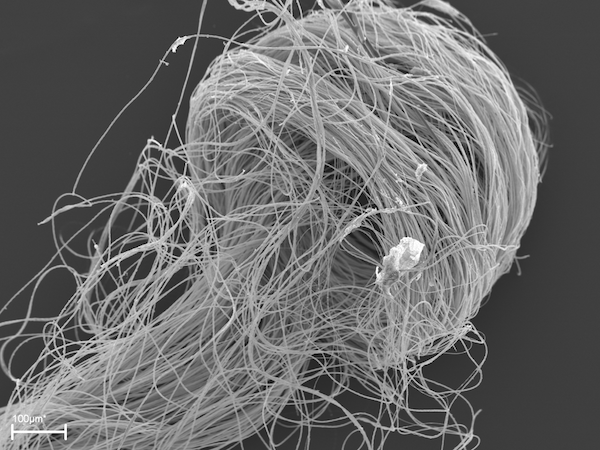 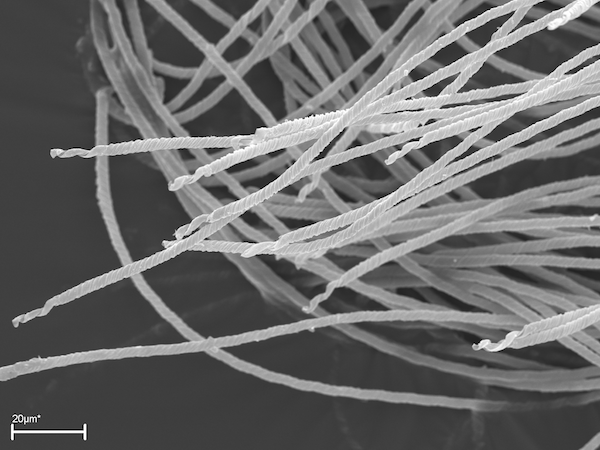 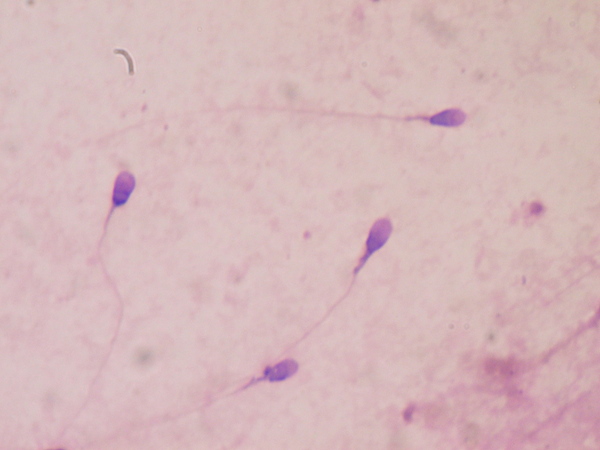 In contrast, the sperm cells of other animals, like these human sperm, have long tails. Photo by Bobjgalindo.

(11/04/2013) Based on a single tooth from Australia, scientists believe they have discovered a giant, meter-long (3.3 feet) duck-billed platypus that likely fed on fish, frogs, and even turtles, according to a new study in Journal of Vertebrate Paleontology. At least twice the size of a modern duckbilled platypus, the scientists say the extinct giant likely lived between 15 and 5 million years ago.