Loss of wildlife and deforestation can increase human disease

Of mice and men: deforestation linked to human disease

Deforestation is wiping out habitat for plants and animals around the world. It is linked to reductions in air and water quality, hastening climate change, and is contributing to increased rates of drought and fire. Now, for the first time, researchers have found that deforestation may also lead to a heightened risk of human disease

The study, published in Proceedings of the National Academy of Sciences, links a rise in disease to reductions in large mammals and the consequential colonization of deforested areas by rodent populations harboring pathogens.

“We are in the middle of an extinction crisis,” the authors write. “Among mammals, for which population trends are known, more than 50 percent of species are currently declining.” 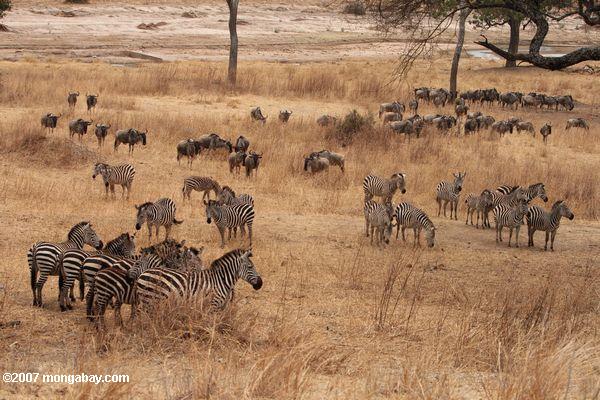 Zebra and wildebeest in Tarangire National Park, Tanzania. Photo by Rhett A. Butler.

Of these, large-bodied species are more likely to experience decline. This is primarily due to their need for larger habitats and the fact that their populations have a more difficult time recovering when reduced because generational times tend to be long and offspring few.

Deforestation can have a one-two punch effect on ecosystems inhabited by large animal populations. As forest cover is removed from an area, large species leave — a situation termed “defaunation” by the study’s authors. As large mammals vacate an area, small ones move in to fill the void and take advantage of resources such as grasses and seeds normally eaten by large species.

Large animals act as ecosystem stabilizers. Herds of ungulates such as bison keep grasses in check, while their manure fertilizes the soil and keeps vegetation growing.

“The systematic decline of large species, both herbivores and predators, is thus often associated with pronounced effects on other aspects of community composition and structure, ecosystem function, and even evolutionary trajectories,” write the authors.

These effects can include the emergence of diseases transmissible from animals to humans, called “zoonoses.” According to the study, at least 60 percent of all human diseases originated in other animal species. For example, humans can become infected by a form of bovine tuberculosis, and most seasonal strains of influenza start off in flocks of ducks and other poultry in Asia.

Zoonotic infection most commonly occurs when humans live in close proximity to large numbers of other animals. Usually this happens in agricultural situations, when humans are tending to domestic breeds. However, defaunation caused by deforestation can upset natural ecosystems and result in colonization of an area by large numbers of wild animals – often, rodents.

“Rodents are common reservoir hosts (long-term source hosts for a pathogen) for many human zoonotic pathogens, such as Borrelia burgdorferi (Lyme disease), hantaviruses…Yersinia pestis, and Bartonella (bartonellosis).,” write the authors. “They are particularly important hosts for flea-borne diseases, which are absent or low in prevalence in most larger wild animals, most of which do not carry fleas.” 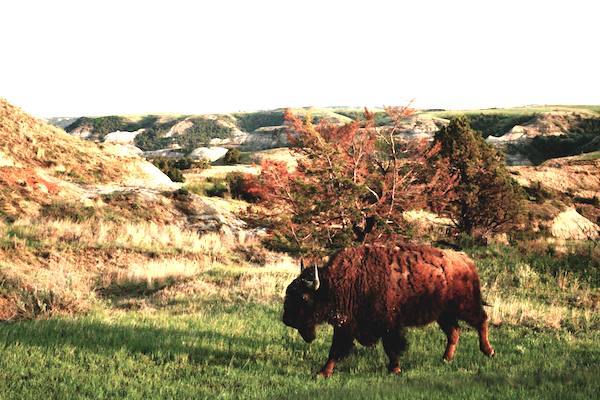 An American bison (Bison bison) trods the ground at Theodore Roosevelt National Park in North Dakota, keeping the rodents and their parasites at bay. Photo by Morgan Erickson-Davis.

Bartonella is a type of bacteria that can be transmitted through flea saliva from rodents to humans. Infection produces a wide range of symptoms such as fever, cough, and inflammation of heart tissue. While treatment with antibiotics is usually effective, those with compromised immune systems may have difficulty recovering.

For their study, researchers examined the effects of large wildlife removal on the risk of Bartonella infection by isolating a tract of land in Kenya from its normal array of large mammal fauna. They found that the number of rodents roughly doubled in their experimental tract after large mammals were removed. Of these rodents, more than 95 percent carried fleas. Because of the higher number of rodents and, thus, the higher number of fleas, the researchers found that their experimental tract contained a much higher Bartonella presence than in a control area where rodent populations were kept in check by large mammals.

“These results provide strong experimental evidence that the effects of differential loss of large wildlife can cascade to cause increases in the abundance of zoonotic pathogens across a landscape, via an increase I the abundance of hosts and vectors,” the study states.

This study lends a new perspective to deforestation. Human-caused forest loss for timber, agricultural, and other purposes, is felling the world’s trees at a rate of nearly 50,000 hectares every day. The existences of innumerable species are threatened by deforestation through habitat loss and degradation. Now, humans themselves may be at greater risk of disease due of deforestation.

“As large wildlife continue to decline globally, “ the authors write, “ecologists, conservation scientists, and health practitioners are challenged to understand and interpret the implications of these changes for ecological communities and the people who inhabit these spaces.”

(05/06/2014) Although the Republic of the Congo has opened up nearly 90 percent of its lowland forests to logging, the majority of the logging occurring in the country is still illegal, according to a new report from the Chatham House. In fact the UK policy institute finds that illegal logging in the Republic of the Congo may make up as much as 70-75 percent of the industry.

(05/05/2014) A few months before his administration ends, Indonesian President Susilo Bambang Yudhoyono expressed hope that his successor would be able to prolong the ban on new logging and plantation concessions he introduced in 2011. He cited the progress it has made towards more sustainable land-use practices, and subsequent benefits in environmental conditions and public health.

(05/05/2014) Plans to rapidly expand palm oil production in Indonesian New Guinea are unlikely to boost livelihoods for local communities since most investors are outsiders and the bulk of workers will be migrants, argues a paper published in Environment, Development and Sustainability.

(05/02/2014) Tropical forests, which provide rich biodiversity, vital carbon storage, and essential medicines, are being damaged and destroyed at a rapid rate worldwide. Loggers especially target old-growth forests for selective harvesting of their valuable timber. But while selectively logged forests are indeed degraded, these disturbed forests are valuable ecosystems for many species, with higher biological productivity than previously thought, and merit increased conservation attention, argues a new paper published in Frontiers in Ecology and the Environment