After weeks of slogging through thigh deep mud on hired motorbikes, passing dozens of bushmeat vendors offering everything from okapi skins to monkey meat to chained chimpanzee orphans, Dr. Thurston C. Hicks and his colleagues had finally arrived at their goal: they were sitting in a clearing in the legendary Gangu Forest, one of the most remote and pristine stretches of wilderness remaining in Africa. In this ancient seasonally flooded forest, the team had just come across the most exciting pile of leaves they had ever encountered. This was the ground nest of a hitherto undocumented chimpanzee population (Pan troglodytes schweinfurthii) in an area near the town of Bili in the Democratic Republic of the Congo (DRC), just south of the border of the Central African Republic.

Their recent study, published in Biological Conservation, describes this new population of chimpanzees, which forms a continuous cultural group inhabiting an area of at least 50,000 square kilometers (19,000 square miles). 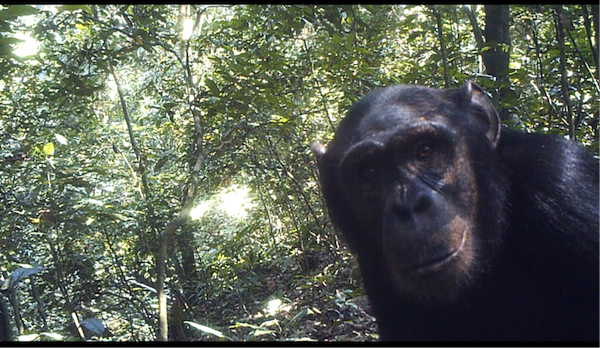 A curious chimpanzee peers into a camera trap in the Gangu Forest, where the apes have not yet learned to fear humans. Photo by Karsten Dierks, Max Planck Institute for Evolutionary Anthropology/Lukuru Wildlife Research Foundation.

The population, estimated to consist of many thousands of individuals, shares a unique set of learned skills that are passed on from generation to generation, such as absurdly long dip-sticks, over eight feet in length, used to fish ferocious driver ants out of their nests. They have learned to use digging sticks to get at the honey in underground beehives, and stone anvils upon which they crack open everything from termite nests and fruits to snails and tortoises. They are much more comfortable sleeping on the ground than their cousins that build nests in trees, even in areas frequented by lions, leopards and hyenas. Even more remarkable, these chimpanzees thrive precisely where experts had predicted there shouldn’t be any, as most chimpanzees prefer more densely-forested areas.

Hicks and his team covered a distance of over 2,000 kilometers (1,200 miles) in exploratory walks, as well as setting up camera traps and conducting an additional 160 kilometers (100 miles) of painstakingly slow transect walks over the course of four months in early 2005. They often followed huge trails weaving through the forest, made not by humans but by the passing of hundreds of elephant feet over countless generations. When they returned seven years later and re-walked the same transects, they were elated to find that the chimpanzee numbers had remained stable. The camera traps confirmed this: even with many photos showing a great abundance of curious mammals, not a single human was recorded – evidence of the minimal human interference in the area.

For their research, Hicks and his team hiked deep into the Gangu Forest. One night, they slept under a massive Ficus tree that they were staking out in order to film the chimpanzees.

“We were on a hillside overlooking a stream, and all night I was enthralled to hear the chatterings of agile mangabey monkeys, the buzzing of fruit bats, and chimpanzee tree drums ringing out through the clear forest air,” he said. “In the morning the tree was visited by an early-rising agile mangabey, then a retinue of hornbills, and shortly later by two juvenile chimpanzees, who proceeded to gorge themselves on the tasty fruits.”

The discovery of this new group is particularly important as chimpanzee populations face ever-mounting pressures from agriculture, logging, and mining. In addition, the precarious state of Congolese politics leads to bushmeat poaching by roving militias living off the land. Fortunately, the area has been spared much of the brutality of the civil war that has ravaged other parts of the Democratic Republic of Congo (DRC). Nevertheless, Hicks has faced no end of obstacles in his own work, once being held at an airstrip for hours by dissatisfied corrupt officials and their gun-wielding guards who felt they weren’t getting their fair “cut” – a bribe for working in the area. Just last year the team returned from the field to find their base camp burnt to the ground by unknown assailants. But the researchers’ drive to learn more about the chimpanzees keeps drawing them back, unperturbed by the difficult conditions and frequent setbacks.

While the discovery is a hopeful sign and a reminder of the wild places that persist in our Google-mapped world, Hicks was quick to caution that the area needs protection to keep it from the exploitation that has decimated chimpanzee populations throughout Africa.

“It is vital that a team of wildlife guards from the Institut Congolais pour las Conservation de la Nature (ICCN) be permanently installed in the area, to help the locals protect their wildlife heritage from invading gold miners and elephant poachers,” he said.

One of Hicks’ key goals of the study of primatology is to gain a better understanding of what it means to be human, and how we fit into the natural world. Together with bonobos (Pan paniscus), chimpanzees are our closest evolutionary relatives, having shared a common ancestor with Homo sapiens some six million years ago. As primatology has progressed, the traditional understanding of what it means to be uniquely human has been continually redefined and blurred, with primate studies revealing insights into the evolution of the transmission of cultural knowledge, complex social structures, and even a sense of morality and altruistic behavior.

Just as this discovery has unveiled a new population of chimpanzees and fleshed out the diversity of their cultural lineage, working in the DRC has much to tell us about ourselves. In this country, one can find the whole range of human experience, a display of our own cultural diversity: sprawling industrialized cities, shifting agricultural settlements, and hunter-gatherer societies; even vast tracts of ancient forest and savannah used sparingly by locals for fishing and hunting. Here, in Joseph Conrad’s infamous Heart of Darkness, in the midst of the violence and corruption spawned by over a century of colonial exploitation, lie beacons of hope that a different kind of culture, in a different species, may continue undisturbed.

Through his work, Hicks has attained a richer understanding of the Congo.

“Despite all we hear about the bloodshed and violence in DRC, the Congolese people are generous and knowledgeable and deserve better.” Of the forest-mosaic habitat of the Bili chimpanzees, he adds “We are so lucky that these places still exist. Losing them forever is unthinkable.”

The 2012-2013 field season was a joint one-year project conducted by the Panafrican Research and Monitoring Program at the Max Planck Institute for Evolutionary Anthropology, The U.S. Fish and Wildlife Service, and The Lukuru Foundation, with additional funding provided by The Lucie Burgers Foundation for Comparative Behavior Research, Arnhem, The Netherlands, The Institute for Biodiversity and Ecosystem Dynamics at the University of Amsterdam, and The African Wildlife Foundation. Cleve Hicks led the survey mission and Karsten Dierks served as Panafrican Team Leader in charge of the camera trap project. They were accompanied by a team of six guards from L’Institut Congolais pour la Conservation de la Nature. 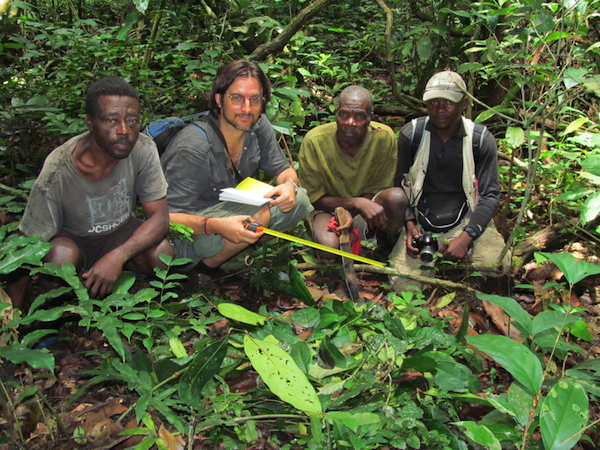 The exciting pile of leaves that indicated the presence of chimpanzees. The 2012 field team (Ligada Faustin, Cleve Hicks, Mbolibie Cyprien and Ephrem Mpaka) measures a large ground nest recently occupied by a Bili chimpanzee deep in the Gangu Forest. With big predators such as hyenas, leopards, and lions abundant in the region, it is still unknown how the Bili chimpanzees can get away with sleeping on the ground. Photo by Cleve Hicks. 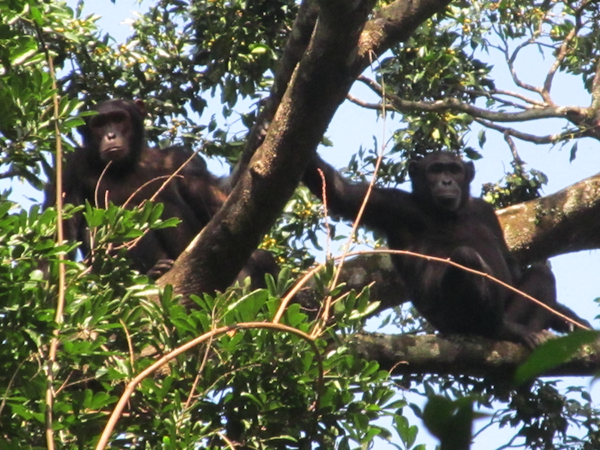 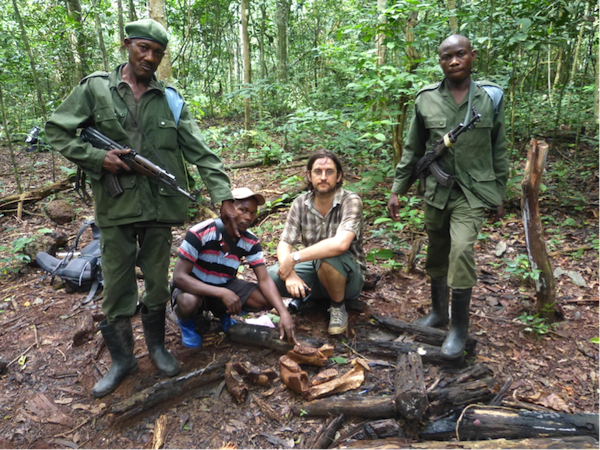 Elephant ivory poaching is a serious threat that draws many hunters to evermore secluded areas. Here in 2012 the team found two elephant mandibles, of an adult and juvenile, at a poachers’ camp in the Gangu Forest. Photo by Karsten Dierks. 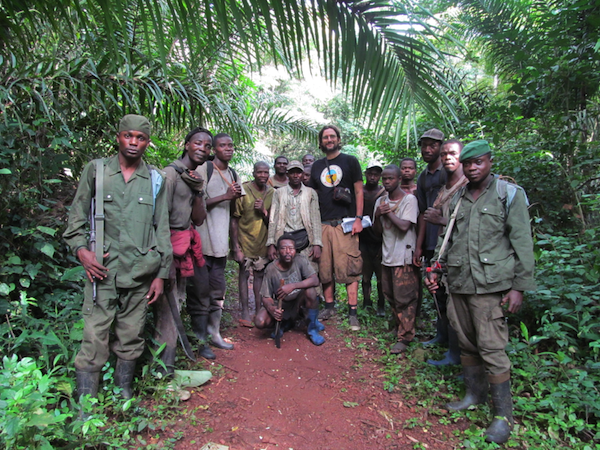 Hicks and the team on the road to Bili, having just finished their transect re-survey in September 2012. Photo by Cleve Hicks. 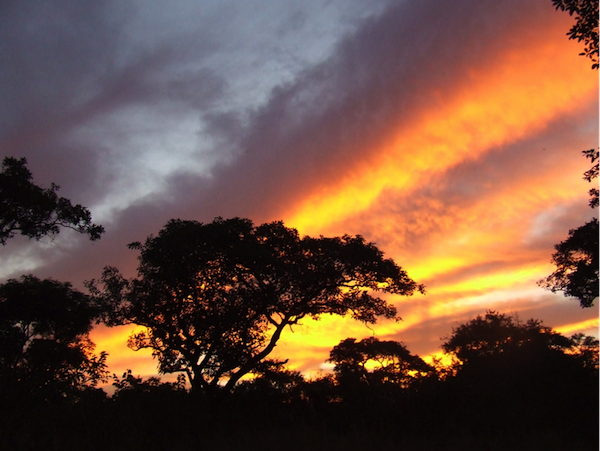 A sunset over the savanna woodland of Bili. Photo by Cleve Hicks.