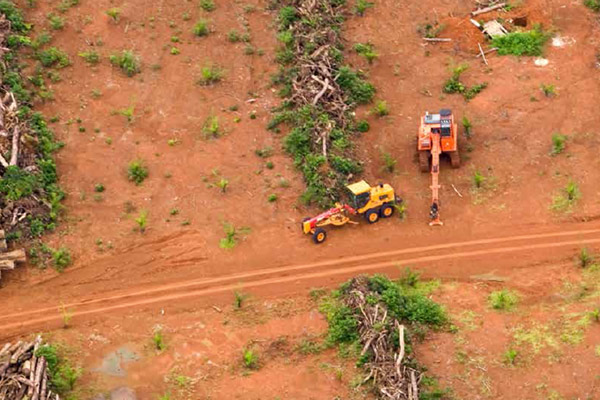 Greenpeace has just accused one of the world’s most controversial oil palm companies, Herakles Farms, of colluding with top government officials to sell off illegally logged timber to China. According to a new report from the environmental group, a stealth agreement between Cameroon’s Minister of Forestry, Ngole Philip Ngwese, and Herkales Farms—through a shell company—could torpedo the country’s agreement with the EU for better timber management.

“This was a deliberate attempt to hide an illegal decision taken in favor of Herakles Farms,” said Irene Wabiwa, Head of Greenpeace Africa’s Forest Campaign.

According to the report, in January of this year Ngwese granted sale of logs from a 2,500 hectare forest plot located inside Herkales Farms’ concession. The sale was granted for a new company called Uniprovince. But Uniprovince was acquired by a local subsidiary of Herakles Farms, Sithe Global Sustainable Oils Cameroon (SGSOC) Cameroon Holding Limited, in 2013.

“National law specifies that [logging]…permits can only be awarded by a competitive public auction, something that did not occur before Uniprovince was allocated the title,” reads the report.

Under Cameroonian law, Herakles Farms cannot sell timber, because it is not a commercial logging company. Moreover, the company has stated several times in the past that it had no intent to sell the timber it felled for its palm oil plantation. But by acquiring Uniprovince, the palm oil company may be able to move its timber regardless.

In fact, Greenpeace says that Herkales Farms has cut off the ends of sawn timber, originally marked HF (Herkales Farms), and remarked them with UP (Uniprovince) in a deliberate attempt to smuggle the timber abroad. Some timber has already been transferred to the port in Douala.

The report also notes that Uniprovince will pay significantly less in taxes than most other commercial loggers: 17 times less than the average deal in fact.

“This constitutes an important loss of revenue for the Cameroon State treasury, and also for local communities who are supposed to receive royalties from the area tax,” reads the report. “The question that remains unanswered is why Uniprovince benefitted from such favorable treatment at the expense of the state coffers.”

These new allegations come after years of controversy and drama surrounding Herakles Farms’ arrival in Cameroon in 2009.

In 2012, after years of dubbing themselves environmentalists, Herakles Farms announced it was pulling out of the Roundtable on Sustainable Palm Oil (RSPO), currently the world’s most stringent regulator of palm oil production. Last year, the government finally approved Herkales Farms’ plantation—after shutting it down for a time—but slashed the concession size by over 70 percent to 20,000 hectares. Then earlier this year the company was hit with a $4.6 million fine in a discrimination suit.

“Herakles Farms has been able to operate with impunity in Cameroon for several years now despite lacking all the required legal documentation/approval to do so,” said Wabiwa. “The company claims that profits from any of its timber would go to the Cameroonian people, but its current attempts to commercialize illegal wood demonstrates that its true agenda is simply to rescue a financially stricken project.”

The push to sell the timber abroad could also weaken a landmark agreement between Cameroon and the EU, according to Greenpeace. In 2011, Cameroon entered into a Voluntary Partnership Agreement (VPA) with the EU to vastly improve its timber sector in exchange for access to EU markets, known as a Action Plan on Forest Law Enforcement, Governance and Trade (FLEGT).

“Through this agreement Cameroon commits to ensuring that all timber production is legal no matter the final destination market,” reads the report. But so far the EU has not responded to repeated allegations that Herakles Farms is intending to sell timber broad.

Moreover, the issue raises questions of how the EU’s FLEGT program will deal with timber from clearcut plantations, an issue throughout the tropics.

“VPAs were conceived with so-called ‘selective’ logging in production forests in mind,” says the report. “More recent data, however, indicate that timber from forest conversion is also of increasing significance in tropical production and in Cameroon could in fact soon
account for a large part of the total national timber production.”

Greenpeace calls on the government of Cameroon to cancel the logging permit with Uniprovince and seize all timber, adding that “Herakles Farms, Uniprovince, and government officials responsible for granting illegal authorizations should be investigated and prosecuted.”

Moreover the group calls on the EU and the Cameroon government to take another look at their VPA to address the issue of timber from plantation sites. In the meantime, the EU should classify timber from Cameroon as “high risk.”

“Herakles Farms is a test case for the credibility of forest governance in the VPA era. The EU will have to show it is able to get its partner, Cameroon, to honor the partnership agreement,” said Wabiwa.

(06/06/2013) The Cameroonian government has lifted the suspension on controversial palm oil project in the northwestern part of the Central African nation, reports the AFP.

(05/24/2013) An American company has halted work on a controversial palm oil project in Cameroon due to opposition from local communities and environmentalists, reports Reuters.