The U.S. Midwest and Northeast experienced one of the coldest, snowiest winters on record this past season. This might seem contrary to warming trends forecast by climate scientists, but a new analysis released this week in Science points out that climate change caused by greenhouse gas emissions may actually have contributed to the well-below average temperatures seen in parts of the U.S. However, it also predicts that such cold events will become less likely in the future as temperatures start ramping up with the expected start of El Niño later this year. Other research found a link between this winter’s record-breaking drought in California and greenhouse gas emissions, and forecasts more extreme weather patterns for the region in the years to come.

Written by Dr. Tim Palmer, of the Oxford Martin Programme on Modelling and Predicting Climate at the University of Oxford, the analysis finds that high temperatures in the West Pacific is key to the unusual weather patterns in the U.S.

Generally, global land temperatures have been rising more slowly than expected since the 1990s, despite greenhouse gas loading of the atmosphere. This pause is linked to increased air circulation in the Pacific that is drawing down excess heat into the ocean depths. However, in the West Pacific – an area of the Pacific Ocean that includes the Republic of the Marshall Islands and Micronesia – heat is not being drawn down. Instead, it is accumulating in the atmosphere and contributing to severe tropical weather systems.

The normal course of the northern hemisphere jet stream.

“Consistent with this, there was a very active typhoon season over the tropical West Pacific in 2013, which devastated parts of the Philippines,” Palmer writes in the report. “These intense tropical weather systems continued into the 2013-14 winter season.”

Although they may be thousands of miles apart, air conditions in the West Pacific directly influence those of North America due to atmospheric circulation patterns.
Air from the Pacific is picked up and transported by the northern hemisphere jet stream – a fast flowing, narrow air current in the upper atmosphere. Normally, the jet stream hits Washington State after a northeast trajectory from the Pacific, then curves southeast across the central plains to Alabama where it angles back northwards and heads out to sea towards the U.K.

While there is some normal variability to its course, major shifts are associated with extreme weather events. For instance, the relatively snowless and mild winter in the U.S. of 2011-12 resulted from an inversion of the jet stream; its “U” course though the North America flipped upside down, trapping warm air over much of the central and eastern U.S.

This past winter was a different story. The jet stream again changed course, this time making a sharp turn north and spreading a “Polar Vortex” of cold air across much of the U.S.

The extreme drought conditions in parts of California are also blamed on this winter’s jet stream anomaly. A ridge of high pressure formed over the region, which dried out the air and led to the worst winter drought conditions ever recorded in the state. The drought has parched farmland and contributed to a spate of wildfires, most notably in the San Diego area where more than 26,000 acres were burned. 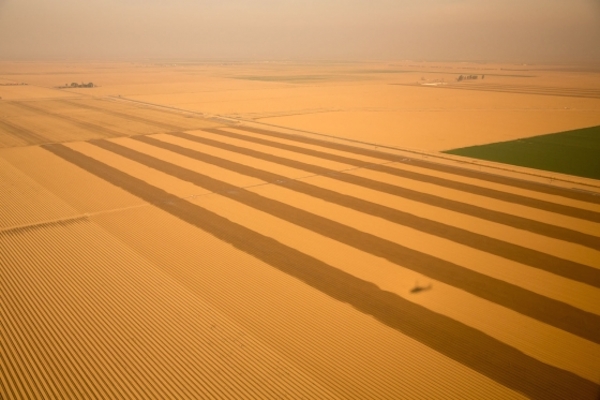 The drought in California has led to more fires and fewer crops, and will likely result in higher food prices in much of the U.S.

The primary cause of changes in the course of the northern hemisphere jet stream ultimately goes back to sea surface temperatures in the West Pacific. As the air gets hotter, thunderstorms are more likely to develop in the area, the energy of which fluctuates the jet stream and creates a high-low or “dipole,” pressure pattern. The dipole was especially evident this past winter, and the jet stream deviation was the most extreme ever recorded, according to a NASA-funded study led by Simon Wang of Utah State University and released earlier this year in Geophysical Research Letters.

The researchers found that a dipole tends to strengthen the year before an El Nino event, in association with wind, ocean temperature, and other pressure patterns. They also discovered that such a huge shift in the jet stream would not have been possible without anthropogenic, or human-caused, greenhouse gas emissions.

“This precursor – we called it WNP (Western North Pacific) – also is influencing the dipole in North America more strongly,” Wang told mongabay.com. “Now these two features (dipole and El Nino precursor) have become linked, and this linkage as we traced is primarily a result of increased greenhouse gases in the atmosphere.”

This fits with the predictions by other climate scientists that El Niño is on the way, likely to begin later this year. The event could mean an end to the relative pause in the rise of land surface temperatures, with excess heat no longer trapped by the world’s oceans and instead ramping up in the atmosphere. If the situation in the West Pacific is any indication, this may mean big changes are to come.

“If an El Niño event is on the way, the hiatus period may be coming to a close,” writes Palmer in his report. “If so, the upside is that the residents of the U.S. Midwest will be much less likely to have to suffer very cold winters. The downside is that global temperatures are likely to start to rise again, with many undesirable consequences for humans across the planet.”

Deviation from average temperatures in December and January, 2013-14. The dark blue bulge descending from Canada into the U.S., called the “Polar Votex,” resulted from an unusual shift in the jet stream.

The consequences of warming-fueled jet stream and pressure changes are already being felt around the world. Scientists also link the formation of Typhoon Haiyan, which killed more than 6,000 people and affected millions, to increased sea surface temperature in the West Pacific. Superstorm Sandy, which devastated the Northeast U.S. in 2012, is blamed on a dip in the jet stream along with a northward bulge of high pressure, a combination so unlikely that models indicate it should happen just once every 714 years.

If influenced only by natural factors the dipole pressure pattern should be decreasing, according to the results of modeling studies. However, observations show that it is still on the rise, most likely due to greenhouse gas emissions. Wang and his colleagues hypothesize this will lead to even more climatic instability.

“Our ongoing modeling analysis (manuscript in preparation) indicates that the sum of winter rain in California will actually increase given the increasing CO2,” Wang said, “but the precipitation fluctuation will also increase – wet gets wetter and dry gets drier.”

Wang and his colleagues found that while there seems to be an upward trend in dipole intensity, it is also prone to fluctuations. The implications of this could be severe.

“What was ignored by the press is that the dipole’s ‘amplitude’ will increase and this means both sides – i.e., when the dipole changes phase forming a trough in the West and a ridge in the East (opposite to this past winter), California will experience episodes of high rainfall with consequences like flooding and landslides,” Wang said.

“The consequence also includes increased magnitude of wildfire, because the very wet years will prompt grass which, in very dry years, becomes fuel to burn.”

The most influential of the greenhouse gases, carbon dioxide emissions have been increasing significantly during the last few centuries due to human activity. In 2013, levels were measured at 400 parts-per-million (ppm), putting the atmospheric concentration at 140 percent greater than before the Industrial Revolution, and increasing at a rate of approximately two ppm every year.

The consequences of this increase range from ocean acidification – excess CO2 lowers of the pH of the water, dissolving the shells of many animals and threatening the stability of entire marine ecosystems – to trapping heat in the atmosphere, leading to climate change. Other greenhouse gases such as methane, chlorofluorocarbons (CFCs), and nitrous oxide are also contributing to warming trends.

Various international and regional initiatives, such as United Nation’s Kyoto Protocol, have sought to reduce emissions in light of growing environmental concerns. However, at a global scale, existing policies have yet to impact emissions at a level that would prevent further significant climate change. 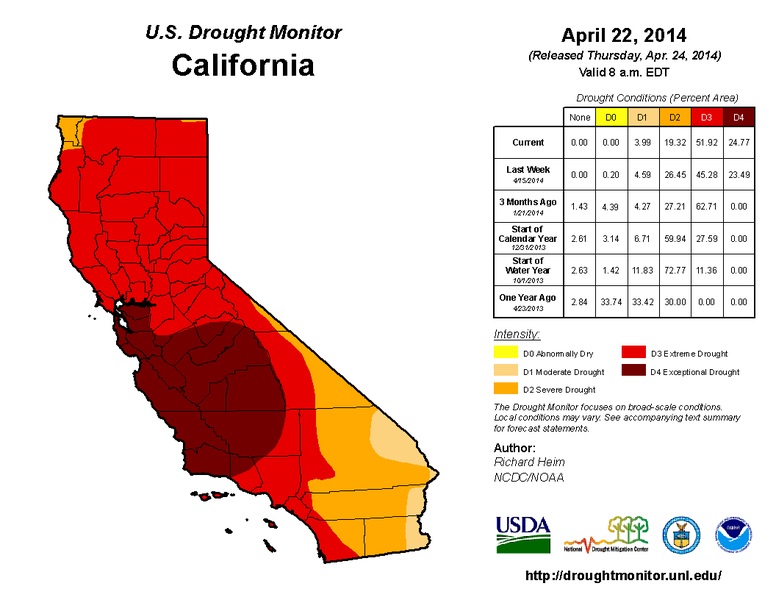 The high-pressure system over California results in the worst drought conditions in the state’s recorded history. Click to enlarge.