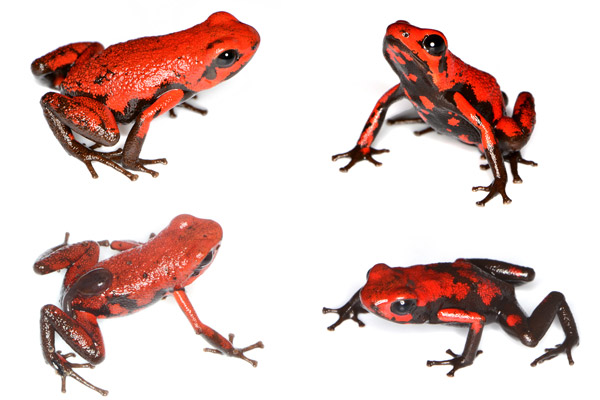 Andinobates cassidyhornae is a very recently described poison dart frog from the Western Andes of Colombia. It is typical of recently described species in having a very small geographical range and being in an area where habitat loss is a major threat to its existence. Photo by: Luis Mazariegos.

Current extinction rates are at the high end of past predictions, according to a new paper published today in Science, however conservation efforts combined with new technologies could make a big difference.

“Humanity has driven rates of extinction even higher than we had previously thought,” co-lead author Clinton Jenkins with the Instituto de Pesquisas Ecológicas in Brazil explained to mongabay.com. “However, today we know better than ever which parts of the world are most important to protect for preventing future species extinctions, and new technologies are helping to monitor and learn about threats in those areas.”

The study finds that it’s not so much that more species are going extinct than feared, but that extinction likely occurred even slower in the past then previously predicted. Using three different types of evidence—the fossil record, speciation rates, and diversification across family groups—the researchers estimated that only 0.1 extinctions occurred in the past on average for every million species years (MSY), instead of the more commonly cited one extinction per MSY. 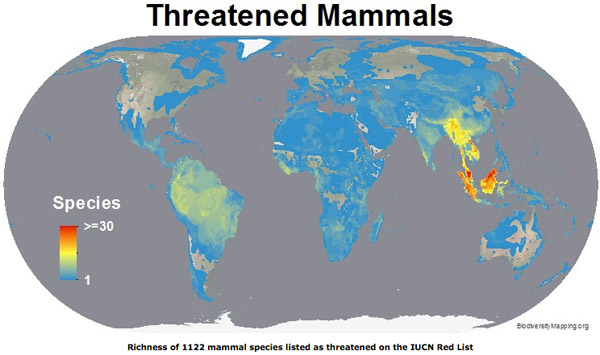 Map shows the regions with the most threatened mammals. Map courtesy of Biodiversitymapping.org.

However, the scientists argue that ongoing conservation efforts and new technologies, including a massive increase in data, could stem global biodiversity loss.

“Online databases, smart phone apps, crowd sourcing and new hardware are making it easier to collect data on species. When combined with data on land-use change and the species observations from millions of amateur citizen scientists, they are increasingly allowing closer monitoring of the planet’s biodiversity and threats to it,” said Pimm. Notable online databases include Global Biodiversity Information Facility, the Ocean Biogeographic Information System, the Tree of Life, TimeTree, according to the paper. In addition, increasingly-popular tools such as conservation drones, genetic barcoding, photo sharing apps, and camera traps have made monitoring biodiversity much easier and cheaper.

“For our success to continue, however, we need to support the expansion of these technologies and develop even more powerful technologies for the future,” Pimm added. 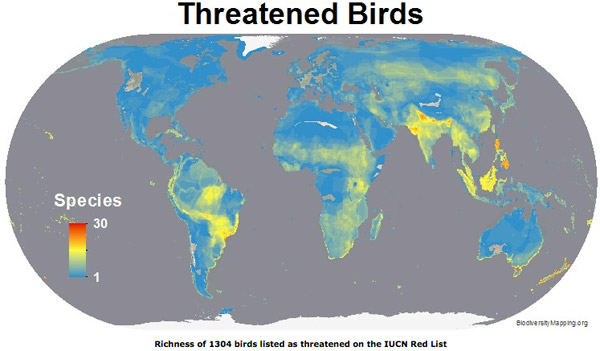 Map shows the regions with the most threatened birds. Map courtesy of Biodiversitymapping.org.

With this massive influx of new data, scientists have been able not only to identify the world’s most biodiverse places, but also where that biodiversity is most threatened. These include the tropical Andes, the Atlantic Forest, Madagascar, and the islands of Southeast Asia, according to Jenkins.

“We know what the major problems are. We know where they are. It is not a mystery,” said Jenkins. “I can walk out my door and see areas of Atlantic Forest being restored and the species returning. I know that it is possible, because I see people doing it every day where I work. What is needed globally is greater political will and resources devoted to solving the problem.” 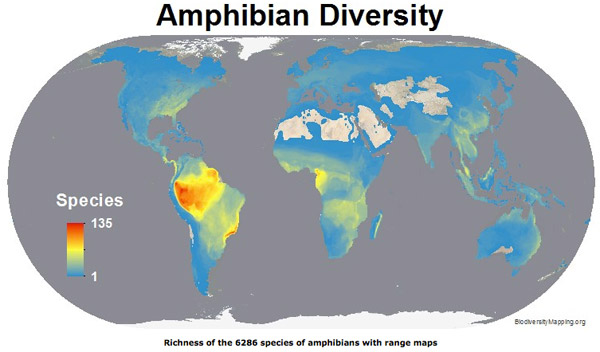 Map shows the regions with the most amphibian species. Map courtesy of Biodiversitymapping.org. 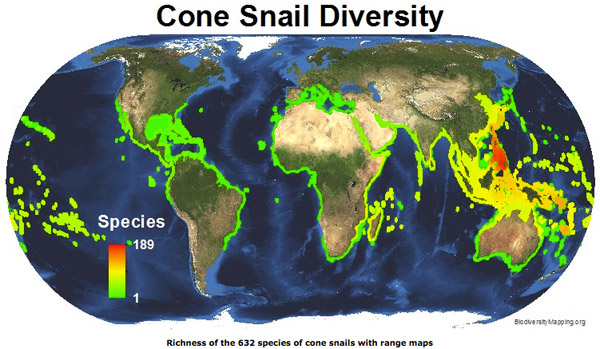 Map shows the regions with the most cone snail species. Map courtesy of Biodiversitymapping.org.

(12/18/2013) In a world where extinctions are almost commonplace and global warming barely raises an eyebrow, very few of us can return to find the places we grew up in unsullied by development. Sometimes, all that is left of a favorite grove of trees or strip of forest are memories. Through Izilwane: Voices for Biodiversity Project, an online magazine for story-tellers, Tara Waters Lumpkin has succeeded in bringing together more than one hundred “eco-writers” who have shared their memories, highlighted environmental crises in their localities and raised their voices against habitat destruction.